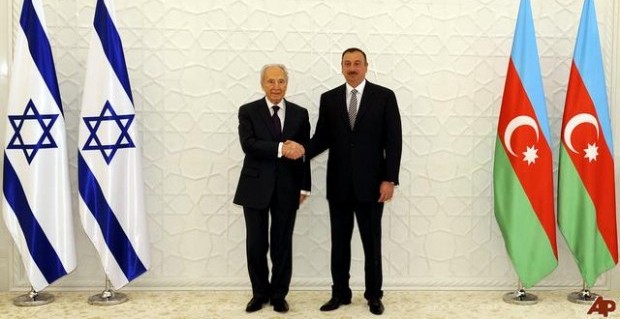 Mark Perry at Foreign Policy says that Israel has bought an airfield, an entire country:

According to several high-level sources I’ve spoken with inside the U.S. government, Obama administration officials now believe that the “submerged” aspect of the Israeli-Azerbaijani alliance — the security cooperation between the two countries — is heightening the risks of an Israeli strike on Iran.

In particular, four senior diplomats and military intelligence officers say that the United States has concluded that Israel has recently been granted access to airbases on Iran’s northern border. To do what, exactly, is not clear. “The Israelis have bought an airfield,” a senior administration official told me in early February, “and the airfield is called Azerbaijan.”

Some of the backstory from Perry:

In 2009, the deputy chief of mission of the U.S. embassy in Baku, Donald Lu, sent a cable to the State Department’s headquarters in Foggy Bottom titled “Azerbaijan’s discreet symbiosis with Israel.” The memo, later released by WikiLeaks, quotes Azerbaijan’s President Ilham Aliyev as describing his country’s relationship with the Jewish state as an iceberg: “nine-tenths of it is below the surface.”

But at Haaretz, Amir Oren says that Israel has put off an attack until 2013 because of a U.S. analysis showing that Iranian counterattack would kill 200 Americans at once. Oren doesn’t say where these Americans would die, but that the analysis has scotched Israeli plans:

According to a war simulation conducted by the U.S. Central Command, the Iranians could kill 200 Americans with a single missile response to an Israeli attack. An investigative committee would not spare any admiral or general, minister or president. The meaning of this U.S. scenario is that the blood of these 200 would be on Israel’s hands.

Back to the war-is-likely analysis. Here is Noam Sheizaf in a piece of March 7 that others have since quoted, saying that Israeli leaders have dug themselves in with their war talk. They have to attack Iran now because if they don’t it will destroy their streetcred in the Middle East. His bold:

The conduct of the Israeli leadership will leave it in a position where it must attack Iran, even if it has to do it on its own, and even if the chances of meaningful success are limited at best.

Suppose Ehud Barak’s deadline passes, and Iran continues to enrich uranium. What then? Considering the show Netanyahu and Barak just put on, if Israel doesn’t attack, who would take any of their claims seriously from now on? If nothing happens in a year from now, and the Iranian regime continues its policy of opacity – without actually developing a bomb, but marching toward creating the capability to assemble one – would the hollow threats by the Israel leadership just make it clear to Iran that Israel and its allies don’t have the desire or the capability to stop it? Would other countries in the region get the same message?

From the perspective of the Israeli leadership, this might be seen as a worse outcome even than a failed attack. At that moment, the rational choice for Israeli leadership would be to attack. Even if the threats were an act to begin with, at a certain point you must deliver in order not to experiance a total policy collapse.