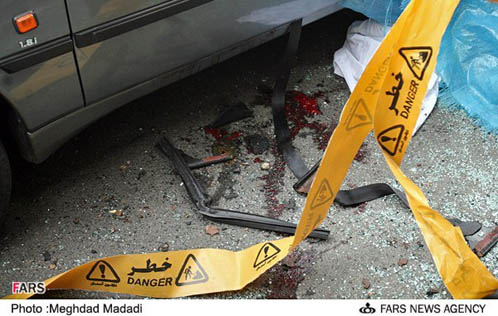 An Iranian news agency reports that a fourth Iranian nuclear scientist has been assassinated.  Mostafa Ahmadi Roshan was a professor specializing in petroleum engineering at a technical university and director of  Natanz’s uranium enrichment facility.

According to Mehr news agency Roshan was “deputy director of the commercial department of the Natanz nuclear enrichment facility.”  He was killed by a bomb attached to the side of his car by two men on a motorcycle.  My own confidential Israeli source confirms today’s murder was the work of the Mossad and MEK, as have been a number of previous operations I’ve reported here.

The killing took place at or near a Teheran university.  The method recalls another series of assassinations that occurred of Fereidoun Abbassi Davani (who was seriously wounded) and his colleague Majid Shahriari (who was killed).  Today’s killing occurred two years to the day after the assassination of another scientist, Masoud Ali Mohammadi.

An [Iranian ] official [said]…”The bomb was a magnetic one and the same as the ones previously used for the assassination of the scientists, and is the work of the Zionists (Israelis)” Fars quoted Deputy Governor Safarali Baratloo as saying.

Witnesses told Reuters they saw two people on the motorbike stick the bomb to the car.

France’s right-wing Le Figaro newspaper offers (this is an English language report on the story) a window into the types of training and recruitment the Mossad engages in to prepare for such sabotage missions.  It reports that Israeli agents identify Iranian Kurdish recruits who are living in exile in Iraqi Kurdistan.  There they train them in “spycraft and sabotage:”

…The Iranian assets are being prepared for conducting operations inside [Iran] as part of Israel’s undercover intelligence war against Iran’s nuclear energy program. The Baghdad source told the French daily that part of Israel’s sabotage program against sensitive Iranian nuclear facilities, which includes targeted assassinations of Iranian nuclear experts, is directed out of the autonomous region of Iraqi Kurdistan, “where [Mossad] agents have stepped up their penetration.”  For this, “the Israelis are using Kurdish oppositionists to the regime in Iran, who are living as refugees in the Kurdish regions of Iraq”, the source told Le Figaro.

Although the article makes no mention of official or unofficial sanction of the Israeli operations by the Iraqi Kurdish authorities, it implies that the alleged Mossad activities are an open secret in Iraqi Kurdistan. This is not the first time that allegations have surfaced in the international press about Israeli intelligence activities in Kurdistan. In 2006, the BBC flagship investigative television program Newsnight obtained strong evidence of Israeli operatives providing military training to Kurdish militia members. The program aired video footage showing Israeli expects drilling members of Kurdish armed groups in shooting techniques and guerrilla tactics.

The Israeli government denied having authorized any such training, while Iraqi Kurdish officials refused to comment on the report. But Israeli security experts told the BBC that it would be virtually impossible for Israeli trainers to operate inside Iraqi Kurdistan “without the knowledge of the Kurdish authorities.”

Iraqi Kurdistan may be one of the few places in the Arab world in which an Israeli is welcome, even Israeli spies.

There also can be little doubt that the U.S. comes into this mix, as the Iraqi Kurdish authorities maintain extremely good relations with U.S. officials in that country.  And it’s hard to believe that we aren’t playing a role in expediting this mischief in any way we can.

I’ve said it before and I’ll say it every time something like this happens: assassinations like the one today accomplish nothing.  It doesn’t fundamentally harm Iran’s nuclear program.  It doesn’t deter Iran or its scientists from pursuing the research and whatever scientific goals they may have.  These are shameful acts by a shameful Israeli government exploiting Iranian terrorists for their own ends.  I find it disgusting that Israel can get away with such acts with impunity.

I am not a supporter of Iran’s nuclear program.  But I am even less a supporter of assassination as state policy, and that includes my own nation, whose president seems especially enamored of targeted killings, even of U.S. citizens.