Arab Spring ‘Good For Women’? The Jury’s Out 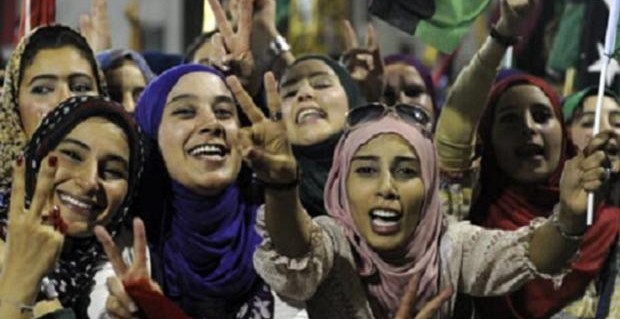 Is the Arab world becoming a friendlier place for women in politics?

The turmoil that has upset the region’s politics over the past year has yet to provide a clear answer. Women can point to some preliminary gains in Tunisia and Libya.  The Islamists who have come to power across the region have proven more female-friendly than skeptics predicted. The winds of change have even reached conservative Saudi Arabia, which decided last year to let women vote and run for municipal office.

But in Egypt – the biggest and most influential country in the Arab world – the revolution has marked a setback for women.

When they try to size up a complicated and contradictory picture, Islamic and Western women’s rights activists express cautious optimism that women in patriarchal North African and Gulf countries are gaining a voice. They warn, however, that that voice is fragile at best, with little evidence yet that women will be able to achieve true power.

“Tunisia and Egypt have held elections, and the fear, particularly in Egypt, is that women have been left out,” Amber Maltbie, an American attorney who is an expert in gender and politics told The Media Line. “The Arab Spring has prompted new elections in the Gulf Cooperation Council (GCC) countries. It appears cosmetic because the bodies are consultative in nature.”

On the balance, the Arab Spring resulted in “mild electoral reforms” and some reforms are nothing more than “cosmetic,” says Maltbie, who was a polling station adviser at the Kosovo parliamentary elections for the International Foundation for Electoral Systems.

Women start from a low baseline in the Middle East and North Arica, which has lagged by Europe and North America, and even Asia, in getting their foot into the doors of parliament and the presidential palace. The Inter-Parliamentary Union figures show that women account for just 11.3% of lawmakers on average in the Arab World, compared with 22.6% in Europe and America. In Asia, they occupy 18.3% and in sub-Saharan Africa 20.8%.

Women have been the power behind the throne in countries like Tunisia, where Leila Ben Ali helped her husband to manage the affairs of state, and Qatar, where Sheika Mozah bint Nasser Al Missned is a highly public figure. Syrian women won the right to vote in 1949, Lebanese women in 1952, Egyptians in 1956 and Tunisian women in 1957.  But no woman has ever been elected to high office or, as had been the norm in the region, seized it for herself.

The Tunisian legislative elections, the first to be held in an Arab Spring country, came as a surprise to Western observers, who had expressed skepticism that the victorious Islamic Ennahda Party could deliver on its promises of promoting democracy and Islam as compatible, if not complementary, forms of governing.

“I view the Tunisian election as a gain for women,” Isobel Coleman, a senior fellow for the Council on Foreign Relations and director of the Civil Society, Markets and Democracy Initiative “They have a substantial representation, and unlike in Egypt, they didn’t lose ground. Many of the women elected are from Ennahda.”

According to the IPU, 26.7% of the Tunisian legislature is female after the transitional government passed a law in 2011 that required half of all party lists to have women.

“It will be up to them to play a strong legislative role and forge an influential role within the party. That is what will make a difference over the long term,” says Coleman.

Libya has yet to elect a parliament, but the National Transitional Council (NTC) has approved a quota for woman that will ensure a place for women in a country making its first real attempt at democratic rule after 40 years of dictatorship under Mu’amar Al-Qaddafi. But women had to fight for their rights.

The final version of the country’s election law, passed in January, had dropped a quota requirement that would give 10% of the legislative seats to women. That angered women’s groups including the Libyan Women’s Platform for Peace, which mounted a campaign to reverse the decision.

Najat Al-Dau, a women’s rights activist in Libya, told The Financial Times the revised election law ignored women’s role in overthrowing Al-Qaddafi.  “I don’t think it’s fair to women,” Al-Dau told the newspaper. “They’re trying to eliminate women from politics and revolution. But they cannot deny us what we did in the revolution.”

The women prevailed, with the NTC revising its election laws to allot 40 seats to women on the 200-member Constituent Assembly.

Morocco, whose king responded to protests with a package of mild reforms, has a voluntary party quota system which resulted in 17% women in the lower house and 2.2% in the upper house in parliamentary elections last year. In 2009, Morocco established a quota requiring that 12% of all local government council seats go to women. As a result, voters elected 3,300 women to local district offices.

Less lucky are Egyptian women, who saw the parliamentary quota system from the Hosni Mubarak era abolished and female representation reduced from 64 seats to just five. For now, Egypt stands above other Arab Spring countries in implementing regressive measures that hamper women’s representation in government.

The government excluded women from the constitutional review committee appointed last year to ensure free and fair elections and create democratic safeguards. The amendments it proposed, which were approved in a referendum last March, made no reference to gender equity. When then-Prime Minister Essam Sharaf fired 20 governors, no women were named as replacements.

Although the loss of Egypt’s quota system is a significant setback for women politicians, Islamic political parties, most notably Tunisia’s Ennahda Party, have demonstrated there is room for women at the governing table. What kind of role they play is another question altogether.

“Islamic governments can prove women have a voice in decision-making, although it remains to be seen how much they will do so,” Coleman, of the Council on Foreign Relations, told The Media Line.

Human Rights Watch in January urged Western governments to give burgeoning Islamic governments a chance to succeed and to support democratic elections whatever the outcome. HRW’s Kenneth Roth wrote in a report that the West “cannot credibly maintain a commitment to democracy if they reject electoral results when an Islamic party does well.”

In the Gulf, women have made some progress toward representation even if the bodies that can run for office have little actual power.  In the United Arab Emirates (UAE), a woman won one of 20 elected seats and seven others were appointed to the consultative council by the ruling emirs of the confederation.  Kuwait has no quota system, but its National Assembly is 7.7% female, according to the IPU. Kuwaiti women won the right to run for office in 2005, but it wasn’t until 2009 that four women were elected to the legislature.

Last September, King Abdullah has announced that Saudi women were given the right to vote and run in municipal elections and would also have the right to be appointed to the consultative Shura Council.

Even appointments to consulting bodies – such as in Bahrain, which has 27.5% female representation in the upper chamber of National Assembly – are an improvement, says Maltbie, the attorney. “These bodies have no binding authority, but going through this is the first step,” she says.

Coleman argues that quotas help women overcome obstacles to obtaining fair parliamentary representation, help form coalitions and provide an entrée into politics. But they are undemocratic and go against the grain of equal opportunity. And, they threaten to taint female politicians by implying they won office because of their gender and not their qualifications.

To election observer Maltbie, getting a critical mass of women in parliament is the key to wining power and there is no reason not to use quotas to create it. “Quotas are really important. Empirical data show that the threshold for policy changes in a manner that is meaningful for women is 30%,” she says.

Numbers, however, cannot tell the whole story. Coleman cautions that how much influence women legislators have remains unknown. The experience of their sisters in Iraq, where the first democratic elections for parliament took place in 2005, is instructive. In her book, Paradise Beneath Her Feet: How Women are Transforming the Middle East, Coleman found that Iraqi men routinely insult their female parliamentary colleagues and consign them to “women’s issues.”

Iraq’s legislative body is 25.2 % women, but one Iraqi female lawmaker, who is a member of the National Iraqi Alliance and spoke on the condition of anonymity, told The Media Line the role of women in the Iraqi parliament is to boost the government’s image.

“How long has it been now?  Six, seven years?” the lawmaker says. “We have accomplished little because we are constantly pushed aside. We’re given meaningless duties and are expected to like it.”