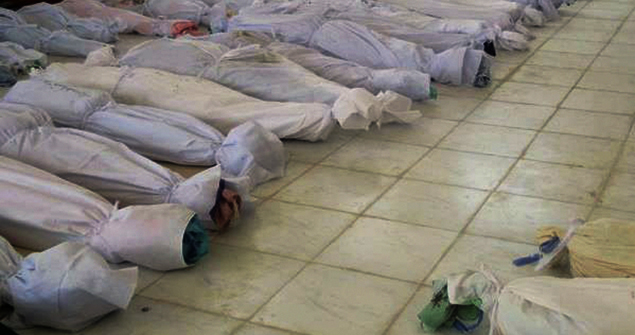 The appalling oppression in Syria is deeply repugnant to the whole Arab world, and there is wide agreement that it should not be allowed to continue unchecked. But this clarity is confused by deep uncertainty about what to do about it.

There are three major issues which need answers before any genuine solution can be found: the Syrian opposition needs a leader and better strategy; the opposition needs to receive far more effective support than it has got so far; and some kind of transitional authority has to be ready to step in.

By now it is obvious that the UN’s hopelessly optimistic Annan plan will not work. The international community is avoiding the pain of looking for a more effective way forward by hiding behind its support for the Annan route. However, it is ludicrous for the world to allow the Russian veto in the UN to stop its looking for the inevitable alternative. It is important to recognise that Vladimir Putin’s Russia is very lonely in the world, and is desperate to maintain any strategic ally. It will go to any lengths to prop up Bashar Al Assad’s regime.

The Annan plan’s weakness was that it relied on the good faith of the regime, and sought a cessation of violence from both sides. But it is all too clear that Al Assad’s regime believes that it can survive by force and that shooting its people into submission is a strategy that will work.

Last week’s brutal assault on villages north of Homs, in which over 100 people were killed in one day, including more than 30 children, make it obvious that the government still has the same mentality that led Syrian troops to slaughter around 20,000 people in Hama in 1982 under the present president’s father Hafez Al Assad.

The obvious continuing commitment to brutality and oppression as the answer to Al Assad’s problems gives the Arab world a major problem, since it is hard to know what should be the next step. Ten years ago, it might have been possible for Arab states to tolerate such oppression amongst one of their number, but today, acceptance is no longer a real option.

Syria is already suspended from the Arab League, and sanctions are in place against the country and individually against members of the government. The League may deplore what is going on, but a major rethink is needed if any practical steps are to be effective.

The resignation of Burhan Galioun as leader of the opposition Syrian National Council (SNC) was a shock; and the failure to find a strong replacement is a major problem. But Galioun’s resignation might lead to a revitalised opposition if some of the reasons for his departure are changed. The SNC operates outside Syria, and became dangerously distanced from the Local Coordination Committees, which operate inside Syria and manage the day-to-day action against the regime.

It was significant that while the Local Coordination Committees resented what they called “a monopolisation of decision-making by influential members of the executive bureau”, and also criticised the SNC for allowing too much influence to the Syrian Muslim Brotherhood.

The financial support to the SNC from Saudi Arabia and Qatar has been seen for many months as favouring an overtly Sunni sectarian point of view, which now appears to have damaged the credibility of the SNC inside Syria.

Arab supporters of change in Syria should look at to how to help the Local Committees achieve better coordination across Syria, and manage better links with the opposition outside the country. It is a disaster for the opposition to be so fractured, and means that there is no coherent alternative to Al Assad. The fear of sectarian civil war is driving many who might want change to support Al Assad only as a vote for stability. .

It is also important that any opposition is blunt about offering Syria an inclusive future. Syria is a complicated society with many different sects. It is not monolithically Sunni or Shiite, and any future leader of Syria will have to be prepared to run a heterogeneous society, which will include Sunni and Shiite Muslims, a variety of Christian sects (some of which have been there for almost 2,000 years), Druze and importantly must also include the Alawites.

This last sect will be the most difficult to include in a post-Al Assad future, because Al Assads are Alawite, and they have used their co-religionists to run Syria for decades. There is a long legacy of Alawite oppression of the rest of Syria, but if the opposition wants to win over the army or security forces, it must distinguish between active supporters of Al Assad’s regime, and Alawites in general. This will not be easy, but will be necessary to achieve a harmonious future for Syria.