An Incredible Journey behind the UAE’s 39th National Day 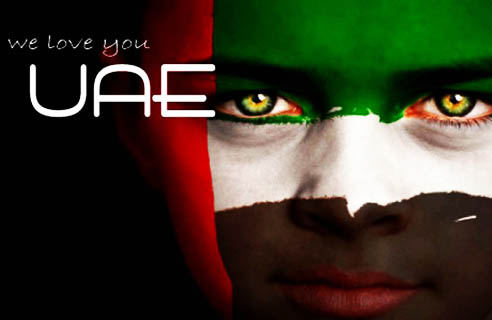 Everyone’s going potty about National Day and the lads have been busily decorating their cars – already the streets are littered with Landcruisers with red, white and black feather boas decorating them nose to tail, Altimas covered in UAE flag stickers and FJ Cruisers with pictures of Sheikh Zayed and Sheikh Khalifa all over them. The street lights have the mandatory LED light strings in green, white and blue (because black lights don’t work, people) and billboards are shouting out ‘Kulluna Khalifa’! (‘We are all Khalifa’ after Sheikh Khalifa bin Zayed al Nahyan, the President of the UAE)

Abu Dhabi police have issued an order forbidding people to completely cover their car windows with flags or to hang out of cars, sit on the doors or roofs or in other ways behave madly. It’s very brave of them, but I can’t help feeling that there’s a touch of the Canutes to their effort – tomorrow is going to be one great parade as an outbreak of festivity, national pride and car culture come together like the Dead Sea closing after Moses and that lot nipped through.

I love the story of the formation of the Emirates: the transition from the Trucial States (back in 1853 the Brits made them all sign up to stop bashing each other and raiding unsuspecting passing dhows, hence ‘trucial’) to the UAE was accomplished in less than two years after a Brit in a bowler hat landed at Sharjah Airport with the news in his briefcase that Her Majesty’s Britannic Government had (finally) realised the game was up, the Empire was no more and we were generally doing a Pontius Pilate on every obligation East of Suez.

This gave these guys a couple of years to define the constitution, acceptable system of governance, administration and identity of a modern nation state. They hadn’t really been, errr, trained for it. The remarkable figures of Sheikh Zayed bin Sultan Al Nahyan and Sheikh Rashid bin Saeed Al Maktoum were to play a critical role in forging the United Arab Emirates out of the messy and time consuming negotiations that at one time or another involved Oman, Qatar and Bahrain too.

Let’s not forget that there was precious little infrastructure in place and that only a few short years before, people here were still living in barasti houses – the ruler of Ajman didn’t quit the old fort (now the museum) until 1967, there were still tribes and Dubai was a small town centered around Bastakia, Shindaga and the souk of Deira. It wasn’t until the late 1950s that Sheikh Rashid started a programme of development and modernisation that included dredging Dubai Creek so that larger boats could come in, leading eventually to the visionary (people at the time thought quite mad) project to create Port Rashid. These men transitioned from being semi-nomadic tribal leaders to the heads of a modern nation state. Their achievements were truly remarkable.

I have some old video footage of Sheikh Rashid, a man that used to take 5am tours around his city as it was being built, in true Arabian Nights style. He’s sitting negotiating with some rather stuffy looking Brits and his expression is magical, a sort of ‘Yeah, right lads’ look on him as if he knows what they’re up to. He probably did, too. This is the man that built the Dubai World Trade Centre when there was no world trade here, who blew a letter F in the desert so big you can see it from space – this was to become Jebel Ali Free Zone, another of his projects that had people at the time shaking their heads and saying that the Sheikh had lost the head. I’ve got video of the blowing up of the desert, too – blokes with mad sideburns and really, really wide collars presiding over the Wile E Coyote style plunger and then BOOM.

The complexity of negotiations to hammer a federation out of these disparate coastal Sheikhdoms was horrendous – land negotiations alone were a huge problem, let alone the different vested interests, rivalries and claims everyone had to settle. It was all made worse by the fact that the dirty deed had been done by a Labour government – and the Tories had hinted strongly that they’d undo it. So the Trucial chappies didn’t get down to it as seriously as they might right up until it became clear that the Tories were as full of it as the average backed-up septic tank.

The result has been the Federation of states that make up the UAE – clockwise: Abu Dhabi, Dubai, Sharjah, Ajman, Umm Al Qawain Ras Al Khaimah (which didn’t sign up ’till a year after the others, holding out for better representation at the Federal level, apparently) and Fujairah. All have coastal and inland holdings, dating back to when the tribes would winter by the sea but escape to the mountains and oases in the unbearable heat of summer) all have territory nested in each other (Go to Hatta, the inland town of Dubai, and you’ll cross Sharjah, Ajman and Oman on your way) because the territorial division was done along the lines of tribal affiliations and all have totally separate police forces, municipalities and, in the main, public services. And yet all are part of one country and one nation.

The result is often quixotic at best – but it works, somehow. Eventually. Mostly.

So what if they struggle at times to get things like the legal system to work properly? They defined a nation in two years and built it in (so far) 39 – an infrastructure that is still, of course, being built out in breathtaking, if sometimes slightly crass, style. The Brits were decimalising and worrying about Europe when the UAE was being born. I was personally involved in making my first ginger beer plants and hating girls at the time. I have since, by the way, continued to like ginger beer and considerably improved my opinion of girls. But I can’t claim to have built a nation…

So here’s a National Day toast: good luck to them, warts and all. We’re here because it’s better than there, after all, aren’t we?

Mind you, take a look at the lads all hooning around tomorrow and spare a thought for quite how bonkers they’re all going to go for the 40th National Day next year. That I have to see! 🙂