An Encounter with the Mukhabarat 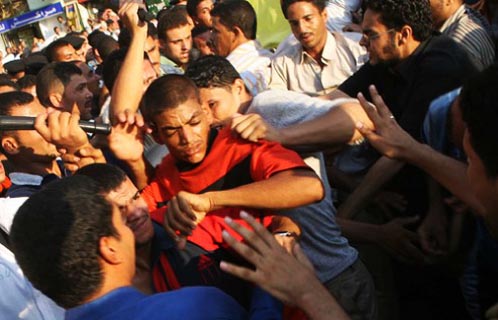 I didn’t know where to go for today’s round of anti-regime protests. There wasn’t any question of whether they’d happen; Tuesday invigorated people. I spent some time in the morning trying to identify where demonstrators were likely going to congregate, but reports were confused so I set out for Tahrir square. That’s where the previous day’s largest protest had been.

The area was teeming with people when I got there, but they weren’t demonstrators. Tuesday had been a national holiday – Police day – and on Wednesday everyone was back at work. Looking around I wasn’t sure how the pedestrian crush and roundabout traffic congestion was going to impact things. The cars, buses, motorcycles and trucks would make it impossible for the riot police to create their human cordon in the streets. And the numbers of passersby made it difficult to identify who was there to protest and who was just there for regular life. I figured that the demonstrators would have the upper hand at the outset.

A crowd started to form near one of the subway stops on the square and I made my way over. The station had been shut down to make it difficult for people to travel to the area – it was about 2 pm now, about the same time the protest began on Tuesday. Commuters were confused about what to do and began to vent their frustration. That was how the protest began. Ironically, the first chant was, “Let us go home!”

The riot police quickly surrounded us – I was pretty close to the people chanting by then – and began to tighten the cordon. I was filming everything, and I wasn’t too concerned about being inside the circle of riot guards. They just didn’t seem that threatening after the events of the previous day.

Things began to get nasty very quickly. The riot police had been passive for the first few minutes, only holding the cordon and tightening it. But then their commanders appeared with mad eyes and preset viciousness. They snarled orders: “Hit him! Harder!” and, “Give them shit to eat!”

I kept filming when a group of plainclothes mukhabarat men burst through the cordon and began to pummel women with their meaty fists. I recorded one woman’s screams and filmed as her face and veil were bloodied. And I filmed another woman’s panicked tears – she was so scared.

It was while I was filming that the first strike fell across my back; a policeman had hit me from behind once, then a second time. The pain was ferocious. One of the mukhabarat men joined him by tackling me and wrapping his arm around my neck.

“You like taking pictures, faggot?” he barked in Arabic.

Another mukhabarat thug began to pull me out of the circle when I started to protest in English. This was something I’d been doing – pretending to not speak or understand Arabic. I knew from earlier experiences in Egypt that claiming to be a journalist didn’t help very much. A journalist friend had been arrested despite having his credentials, and I had none so my best defense was to play dumb. And I didn’t want to get deported.

“Look, I’m an American. I’m just a tourist,” I said, feeling like a coward.

They continued to drag me and I struggled against them and wherever it was they were taking me to. Nothing I said worked so I finally told the two of them that I’d walk myself. They assented – I was yelling loudly in English at this point – which gave me an opportunity to remove the SD card from my camera and slip it into my pocket. More than anything, I regret that I didn’t have a chance to put it anywhere else.

We approached an abandoned garage away from the square when one of them began to reach for my camera. It was in my right hand and I pulled away. I started to say, “You can’t take that” when someone hit me hard in the face with a closed fist. And then the others joined in. It turned out that there were four other mukhabarat men in the dark, fetid space along with other demonstrators who’d been worked over already.

Still, I didn’t give the camera up. They knocked me to the floor and held my legs and left arm down. One of the animals began to kick me in the ribs and stomped on my collar bone. He stood on my chest so I couldn’t breathe and I let go when I began to lose consciousness.

I was yelling the whole time but I don’t remember what I was saying. I don’t remember a lot of what they said either, but they had a few favorite lines they repeated for the next few hours:

“We’re going to fuck your mother.”
“We know you’re an Arab, you son of a whore.”

After they got the camera they picked me up and frisked me. They missed the SD card but took my passport and tripped me into a group of men sitting on the piss-covered floor. My guess is that the mukhabarat men prepared it that way before they began to arrest us.

The other men were all hugging their knees and facing the back wall and I was told to the do the same. I was committed to my not understanding Arabic story, so I remained unresponsive. That earned me another blow to the face and some slaps on the back of the neck and head. But I didn’t move too much and managed to continue to watch the spectacle of modern day Egypt from the vantage point of a piss-covered floor. That seemed appropriate to me.

They brought in a skinny kid a little while after that. He gave them his name and told them he was born in 1993. One of the beefy psychopaths accused the boy of trying to throw a punch and began to choke him. He choked him until he lost consciousness. The legitimate representative of the Egyptian government then let the boy fall to the floor where he began to vomit on his side. None of the animals moved to help. Instead, they picked him up after he came to and cast him into our pile.

Noticing my distress, a demonstrator turned to me and whispered in English, “I’m very sorry. This is not Egypt. This is the president Hosni Mubarak.”

I felt like weeping. Here I was taking refuge behind the Leader of the Free World, and this man who had nothing and no one to protect him, who was very likely going to be badly hurt, thought it was important to comfort me. I didn’t know how to respond.

Sometime later someone tried to interrogate me but his English wasn’t up to the task. I was frisked again which is when they found my SD card. My heart sank; I felt that it was all for nothing.

After about two hours on the floor, a high-ranking rooster came in and told the 25 other men that they were being taken to the police station. Meanwhile, I was pulled out and handed my passport. Someone who spoke English explained that it was a misunderstanding and that I shouldn’t take it too badly. Apparently, they believed the stupid tourist story. Or maybe they didn’t. I don’t know. I just felt lucky to get out with only a bloody nose and bruised ribs.

They gave me my camera and returned my cell phone without a battery or SIM card. Of course, the camera had been wiped clean. I stuck around for forty minutes or so trying to get the SD card, battery and SIM card back but I was told that they’d been lost. I’d spent the day lying, so their lies seemed proportionate.

They have no human rights. And that’s what this is about.