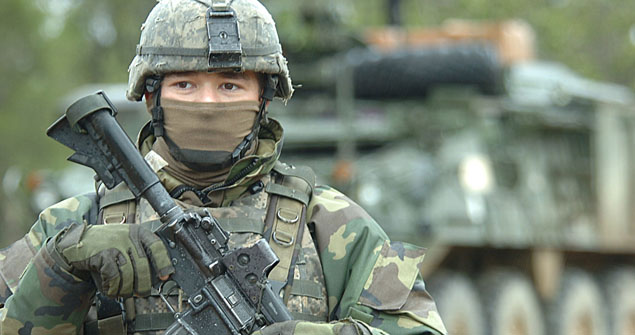 The neoconservatives are back with a vengeance. While popular uprisings in Tunisia, Egypt, Yemen and other Arab countries had briefly rendered them irrelevant in the region, Western intervention in Libya signaled a new opportunity. Now Syria promises to usher a full return of neoconservatives into the Middle East fray.

“Washington must stop subcontracting Syria policy to the Turks, Saudis and Qataris. They are clearly part of the anti-Assad effort, but the United States cannot tolerate Syria becoming a proxy state for yet another regional power,” wrote Danielle Pletka, vice president of foreign and defense policy studies at the American Enterprise Institute (Washington Post, July 20).

Pletka, like many of her peers from neoconservative, pro-Israeli ‘think tanks’, should be a familiar name among Arab reporters, who are also well aware of the level of destruction brought to the Middle East as a result of neoconservative wisdom and policies. Rarely though are such infamous names evoked when the ongoing conflict in Syria is reported – as if the main powers responsible for redrawing the geopolitical maps of the region are suddenly insignificant.

Pletka was the biggest supporter of Ahmad Chalabi, the once exiled Iraqi, who she once described as “a trusted associate of the Central Intelligence Agency (and) the key player in a unsuccessful coup to overthrow Saddam Hussein” in the 1990s (LA Times, June 4, 2004). Chalabi led the Iraqi National Congress, which was falsely slated as an authentic Iraqi national initiative. Eventually, members of the council, composed mostly of Iraqi exiles with links to the CIA and other Western intelligences, managed to sway the pendulum their way, and Iraq was destroyed.

Although the destruction of an Arab country is not a moral issue as far as the neocons are concerned, the chaos and subsequent violence that followed the US war in 2003 made it impossible for warring ‘intellectuals’ to promote their ideas with the same language of old. Some reinvention was now necessary. Discredited organizations were shut down and new ones were hastily founded.

One such platform was the Foreign Policy Initiative, which was founded by neoconservatives who cleverly reworded old slogans. Matt Duss, wrote in ThinkProgress.org about the Foreign Policy Initiative inaugural conference on Afghanistan in March 2009: “I was struck by how very little that was said was controversial,” he wrote. “And that’s really the point — in the wake of Iraq debacle, for which the neocons are widely and rightly held responsible, it simply won’t do to bang the drum for American military maximalism. One has to be a bit slicker than that. And these guys are nothing if not slick.”

Slick, indeed, as neoconservatives are now trying to weasel in their version of an endgame in Syria. Their efforts are extremely focused and well-coordinated, making impressive use of their direct ties with the Israeli lobby, major US media and Syrian leaders in exile. They are being referred to as ‘foreign policy experts’, although their ‘expertise’ is merely confined to their ability to destroy and remake countries to their own liking – and even these are unmitigated failures.

“Foreign policy experts on Wednesday (August 1) urged the Obama administration to increase its support of the armed opposition.” The ‘experts’ included Andrew Tabler of the Washington Institute for Near East Policy (WINEP), another pro-Israel conduit in Washington. It was established in 1985 as a research department for the influential Israeli lobby group, AIPAC, yet since then it managed to rebrand itself as an American organization concerned with advancing “a balanced and realistic understanding of American interests in the Middle East.”

Obama, of course, obliged under pressure from the ‘experts’. According to CNN, he signed a secret order “referred to as an intelligence ‘finding,’ allow[ing] for clandestine support by the CIA and other agencies.”

Still, the neocons want much more. The bloodbath in Syria has devastated not only Syrian society, it also brought to a halt the collective campaigns in Arab societies which called for democracy on their own terms. The protracted conflict in Syria, and the involvement of various regional players made it unbearable for the neoconservatives to hide behind their new brand and slowly plot a comeback. For them, it was now or never.

On July 31, AIPAC wrote all members of Congress urging them to sign on a bill introduced by Ileana Ros-Lehtinen and Howard Berman. Entitled ‘The Iran Threat Reduction and Syria Human Rights Act (H.R.1905)’, the bill, if passed, “will establish virtual state of war with Iran,” according to the Council for the National Interest.  The old neoconservative wisdom arguing for an unavoidable link between Syria, Iran and their allies in the region is now being exploited to the maximum.

A few days earlier, on July 27, fifty-six leading ‘conservative foreign-policy experts’ had urged Obama to intervene directly in Syria. “Unless the United States takes the lead and acts, either individually or in concert with like-minded nations, thousands of additional Syrian civilians will likely die, and the emerging civil war in Syria will likely ignite wider instability in the Middle East.”

The timing of the letter, partly organized by the Foreign Policy Initiative, was hardly random. It was published one day before the first ‘Friends of Syria’ contact-group meeting in Tunisia, which suggests that it was aimed to help define the American agenda regarding Syria. Signatories included familiar names associated with the Iraq war narrative – Paul Bremer, Elizabeth Cheney, Eric Edelman, William Kristol, and, of course, Danielle Pletka.

With the absence of a clear US strategy regarding Syria, the ever-organized neoconservatives seem to be the only ones with a clear plan, however damaging. In her Washington Post piece, Pletka’s argument for intervention, bridging countries, peoples, sects and groups of all kinds – as if the Middle East is but a chess game governed by delusional but persistent ambitions. In one single paragraph, she made mention of Iran, Hezbollah, Iranian Revolutionary Guard Corps, terrorists aimed at destabilizing Iraq, “puppet governments in Beirut” and “Palestinian terror groups dedicated to Israel’s destruction.”

Yet, it is this sort of ‘political expertise’ that governed US foreign policy in the Middle East for nearly two decades. Now that the short respite is over, the neoconservatives are back with their bizarre maps, bleak visions, and a fail-proof recipe for perpetual conflict.