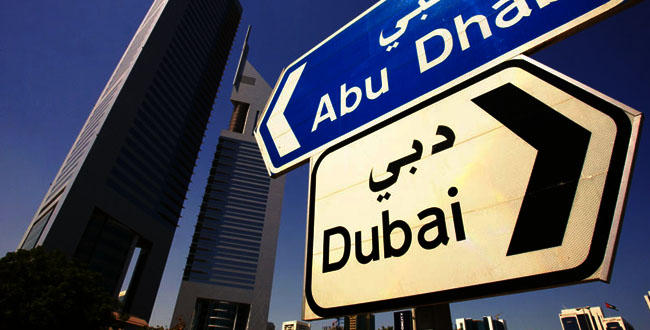 For much of the past decade Abu Dhabi Emiratis have looked somewhat askance at their neighbors in Dubai who embarked on a mission to build the world’s tallest buildings, the greenest golf courses and the largest shopping malls.

“I know more than a few Emiratis who see what’s happening in Dubai and think of the hadith in the Qur’an about the end of days,” an Emirati businessman told The Media Line and asked not to be identified to protect his Dubai construction contracts. “The hadith says, ‘There will be no Judgment until very tall buildings are constructed.’ ”

Notwithstanding dark predictions of Dubai’s doom, the Emirati’s sentiment illustrates the gulf between the two emirates’ approach to economic diversity.

It’s easy to bash Dubai, which saw hundreds construction projects ground to a halt during the global recession that began in late 2008. Abu Dhabi contributed to a $20 billion bailout package to Dubai. An estimated $4.1 billion of that bailout went to save the government-owned Dubai World.

Abu Dhabi is far healthier, but it also gave loans totaling $10 billion to rescue its own troubled Aldar Properties, which developed such prestige projects as the Yas Marina Circuit for the Abu Dhabi Grand Prix and Ferrari World. The bailout stung so badly that Abu Dhabi’s investment arm, Mubadala, is considering abandoning real estate investments.

But given its wealth, Abu Dhabi is in a better position to be magnanimous. The United Arab Emirates has the world’s fifth largest oil reserves. Abu Dhabi controls 95% of those reserves, holding about 92.2 billion barrels. Dubai has only 4 billion barrels in reserve, which are mostly from offshore oil fields and likely to be exhausted by 2030.

As a result, the oil-poor little brother embarked on a building frenzy that included the world’s tallest skyscraper, the 2,722-foot Burj Khalifa, among other large-scale luxury projects to create a tourist mecca.

The stark reality today is that Dubai’s salad days are over. The Dubai Real Estate Regulatory Authority reported in 2011 that nearly 300 construction projects remained on hold due to the global recession. Nakheel Properties, which created the three iconic man-made Palm Islands off the Dubai coast, has more than 100 projects on hold. Dubai Properties Group lists 42 stalled projects, including the now-suspended high-profile Tiger Woods luxury golf resort.

“There are major projects not completed, delayed or stopped entirely,” Mills said. “Some projects were more advanced, and some are officially on hold but effectively cancelled and will never come back. And some projects with infrastructure in place will deteriorate and there will come a time when those projects will have to be abandoned.”

He added that the once-promised projected population of one million on the Palm Islands is a “fantasy” in today’s economic environment.

However, Dubai’s debt woes will have little impact on its long-range quest to remain the playground of the Middle East.

Asher Noor, chief financial officer for the Riyadh-based AlTouq Group, a financial investment organization, told The Media Line that although Dubai continues to grapple with slower growth, its prospects are promising for the long haul.

“(Dubai) sure has a short term maturity mismatch in its finances, but given its geographical location, political stability, and relatively mature laws and transparency as compared to its neighbors, I do not foresee Dubai struggling with raising finances,” said Noor, who emphasized that he is not speaking for his employer.

“The Arab Spring has been a shot in the arm for reviving the belief that Dubai is indeed a safe haven for regional investors,” he added.

A key component to attracting foreign investors is for Dubai to move beyond luxury resorts and focus on strengthening its economy, Noor noted.

“Abu Dhabi took a back seat while Dubai went on creating the diamond in the desert,” he said. “I see them as pilots and co-pilots on a long haul flight. Now Abu Dhabi has taken over the pilot duties but that does not mean that Dubai is relegated to an aisle seat in the economy section. What Dubai and Abu Dhabi need is more substance to their economies than skyscrapers or man-made islands. Dabbling in fine arts, music, energy efficient projects, sporting extravaganzas, and developing tourism spots are their equally important priorities. I think they are doing a very good job in the right direction.”

Abu Dhabi, though, has the edge. The emirate’s Executive Council announced last month that it is reviving plans to complete construction of the Zayed National Museum and the Guggenheim and Louvre branch museums. Its centerpiece to strengthen its infrastructure is the Mohammed Bin Zayed City that will feature 349 residential towers and ultimately have a population of about 85,000. The emirate also is building 24 new public schools.

Mills said that Abu Dhabi and Dubai share many similarities in their diversification efforts, especially in attracting more tourists. “The major difference is that Abu Dhabi is attracting higher end tourists with its plans for museums.”

Abu Dhabi also has taken a more aggressive approach in specializing in science, technology and education. Despite the economic downturn, construction of the zero-carbon, zero-waste Masdar City continues with completion scheduled for 2025. It will eventually have about 60,000 workers commuting daily to the city. Masdar City will have a solar power plant, wind farms, gray water recycling, solar-powered desalination and geothermal energy plants.

A central part of Masdar City is the Masdar Institute of Science and Technology, which opened in 2009 and focuses on research in renewable energy and clean technology.

Sultan Ahmed Al-Jaber, chief executive officer of Masdar and chairman of the Executive Committee of the Board of Trustees of the institute, told UAE reporters in January that, “Abu Dhabi is evolving from a resource-based economy to a knowledge-based economy” by focusing on “future leaders in the science and technology spheres.”

Abu Dhabi has also taken the lead in developing a $20 billion four-reactor nuclear power plant at Braka. The emirate has eased U.S. and Israeli concerns by developing a transparent civilian program. The emirate also promised not to reprocess spent fuel or enrich uranium that leads to building weapons. By 2020, the plant is expected to provide 25% of all of Abu Dhabi’s energy needs and 12% for the rest of the UAE.

By pushing for renewable energy and developing an automotive re-export trade center to make up for the absence of automobile manufacturing in the region, Abu Dhabi will become an economic powerhouse.

“It’s important not to overplay clean energy,” Mills said. “The tangible effects now are not much. But Abu Dhabi has a much stronger industrial base in aluminum and petrochemicals than Dubai.”

Dubai, in fact, has performed remarkably well not to depend on oil revenue. “Dubai did succeed in reducing its dependency on oil,” he said. “Aside from tourism, the Dubai government is getting revenues come from customs duties, various local taxes, road fees and government investments.”

Mills said that not only is Dubai’s economic model sustainable, its geographical proximity in the Arabian Gulf makes it an ideal trade center. “Dubai attracts so much for its services in the Gulf, and no other Gulf countries come close,” he said.

“The real estate crash left a very sour taste in many a mouth and investors and developers are still struggling to recoup their losses, let alone (see) any upside,” Noor said. “It has not only been a humbling but a very important learning lesson for many who now understand what Warren Buffett means when he says be fearful when others are greedy and be greedy when others are fearful.”

2 Responses to Abu Dhabi vs Dubai: There’s a Clear Winner