A Taboo Subject: The Desperate Plight of Domestic Workers in Oman 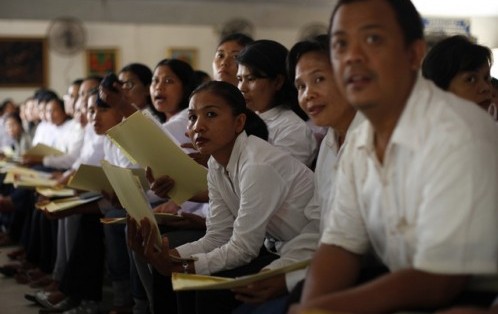 There is a young Nepalese housemaid who works at a house down the street. Every morning she’s outside scrubbing the cars of the lazy young men who live in the house. At noon she’s outside hanging laundry. In the evening she’s dragging garbage bags to the communal garbage bins. She always looks tired. I’ve been watching her for over a year.

Last week, one of the young men in the family drove up to the house with a carload of groceries. He lit a cigarette and settled down onto the front steps to supervise her as she carried heavy bags and boxes of bottled water into the house. On her fourth or fifth trip, she tripped and dropped a sack of onions on the steps. He shoved her and shouted something at her. She nodded, picked up the stray onions, and carried the sack in.

Like many of her South Asian, Southeast Asian and Ethiopian counterparts in Oman, she probably works over twelve hours a day doing all the housework and taking cake of the family children. She earns a mere RO30 or RO40 Omani riyal a month. At the most, she’ll earn  RO 60. Sometimes her employer won’t pay her salary for months at a time.

She is probably verbally abused regularly and in some cases physically and sexually abused as well. Her employer is guaranteed to have her passport locked away, even though it is now illegal in Oman (What’s the point though when there’s no penalty?)

She was probably deceived into coming here by a greedy agent who had her sign a phony contract promising double or triple what she’s making now. Her employer won’t let her leave until she’s paid back her employment visa charges. Assuming she earns 50 OMR a month, it’ll take her over a year to pay the amount back in order to regain her freedom again.

The whole scenario above has ‘Human Trafficking’ written all over it. Unfortunately, many Omanis don’t see it that way. In fact, I don’t think most of them have ever heard the term ‘human trafficking’ before and have no idea how serious it is.

I am a proud Omani, but the general attitude among locals here towards South Asians & Southeast Asians makes me sick. I’m using housemaids as an example only. The same applies to construction workers who have built this country block by block (literally) and other low-skilled laborers. Whenever I try to discuss this with colleagues or friends, they claim that the abuse of migrant laborers is worse in other GCC countries and that laborers are better off in Oman. As if that justifies ill-treating another human being!

In 2007 the US State Department’s Annual Trafficking in Persons Report pushed Oman down to Tier 3, the lowest rating on the human trafficking index. This embarrassing rating wasn’t because the situation here was terrible but rather because we didn’t appear to be doing anything about it.

Furthermore, international human rights monitor groups weren’t able to operate in Oman to the best of my knowledge, and that didn’t look too good for us either. After it became apparent that Oman was still down in Tier 3 in 2008, the government publicly rejected the report then hastily set up a National Committee for Combating Human Trafficking (NCCHT) as well as the National Human Rights Commission (NHRC). This placed us back in Tier 2 during 2009, 2010 and 2011. Tier 2 basically means we’re not complying fully with minimum standards to eliminate human trafficking; however, we’re making significant efforts to do so.

The NCCHT’s website is informative and it provides hotline numbers for reporting cases of human trafficking. The site also enables you to download the National Plan for Combating Human Trafficking in Oman. That’s a good step in the right direction, but what about spreading awareness among Omanis? Employment agencies aren’t the only culprits in this battle.

The aim of this column isn’t to criticize government policies, per se, but rather to address the issue from a human perspective. Nearly sixty years ago my father’s family lived in a cave in the mountains of Dhofar. My grandmother was out with the animals from sunrise to sunset. Like most Dhofaris living in the mountains at the time, every day was a struggle to find food and water. Today, almost every single Omani household has one or two maids whom they treat with very little respect. What went wrong along the way and when did we stop being humble?

Something I find quite interesting is that Oman was one of the very last nations on earth to abolish slavery in 1970. It’s incredible to think that people who actually owned slaves are still alive today. I mention this because perhaps in some way this is linked to how many Omanis view and treat their domestic help, and why they feel the need to have them in the first place. Naturally, slavery is a taboo subject that no one discusses in public here.

I know it’s not fair to generalize because there are plenty of really great employers who treat their labourers as humans. By employing help Omani families are indirectly supporting immediate and extended family members in their employees’ respective countries. However, that does not by any means justify low wages, forced labour, threats, blackmail and confiscation of passports..

This is just the tip of the iceberg, and the situation is far more complicated than anything I can fit into one column. Oman has made great progress in the past 41 years, but most Omanis remain uninformed about issues related to human rights.

As a young Omani who cares very much for her country, I’d like to see more awareness campaigns in public schools about human rights. Kids need to learn from a young age how to treat people of all backgrounds with dignity and respect. I’m tired of seeing neighborhood kids throw rocks at the municipality workers who collect garbage from our streets.

Just yesterday, it was announced that His Majesty Sultan Qaboos bin Said has advised the Ministry of Education to increase the number of Islamic studies classes in schools. Since basic human rights are extremely relevant to the peaceful message of Islam, perhaps the new curriculum can include more basic human rights teachings. This country needs it. Food for thought….

4 Responses to A Taboo Subject: The Desperate Plight of Domestic Workers in Oman