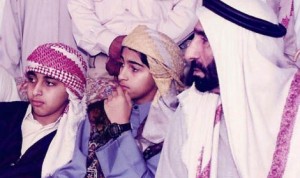 The world’s oldest reigning monarch and the last of the UAE’s ‘founding fathers’, Sheikh Saqr was 92 and had been in ill health for some time. The newspapers lagged Twitter this morning and struggled to get stories together, but the immediate flood of interest brought down WAM, the UAE’s news agency and the source of any ‘official’ news.

Ras Al Khaimah means, literally, ‘headland of the tent’. The khaimah is the traditional barasti (palm frond) dwelling of the mountain people of the UAE. Typically khaimahs are dug into the ground, lined with stone and then the barasti walls and roof are built above. Sheikh Saqr would remember when these were the majority of buildings in RAK – he had ruled the country since 1948.

RAK joined the UAE a year later than the other emirates, the Federation was founded in 1971 and RAK joined in 1972. I never did find out the precise reasons for the delay, which has always intrigued me.

This really is the passing of an era rather than one man. It’s a sad day for Sheikh Saqr’s family and the people of Ras Al Khaimah, but it’s also sad to see the passing of the last of the men who brought this country from a scattered land of tribal peoples to become a modern nation.