Democracy Performance Review : Could do Better 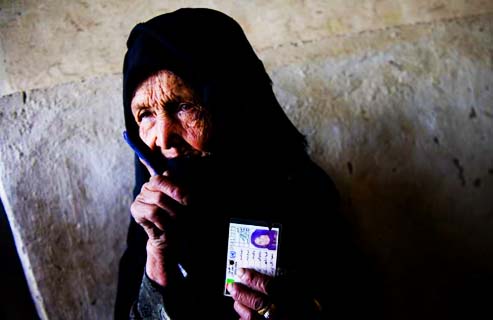 An Afghan woman shows her inked finger at a polling station in Kabul, Afghanistan, on Saturday, September 18, 2010. Militants struck throughout the country trying to stop the voting. UPI/Hossein Fatemi

As 2010 draws to a close, TV channels and newspapers around the world are starting to publish their reviews of the year. This is also a time when managers review the performance of their subordinates, recognize achievements and set objectives for the following year.

Democracy’s objectives for 2010 were unchanged from previous years. Reflect the will of communities and nations through a process universally recognised as fair and transparent. Then ensure that decisions arrived at through the process are respected and implemented in a way that benefits the nation without unduly harming the individual.

This year’s performance was the usual mixture of outcomes.

First, the successes. Brazil, where President Lula stepped down and was succeeded by a close colleague without disputes or unrest. The UK, where a coalition government took power for the first time for seventy years. The US, where mid-term elections have not yet prevented President Obama from reaching accommodation with his opponents on key political issues. Australia, where Julia Gillard won by a whisker without any subsequent paralysis in decision-making. And Bahrain, where recent municipal and parliamentary elections passed off peacefully.

Second, dubious process but some positive outcomes. Iraq, where six months of wrangling finally look likely to deliver a functional government. Burma, where an opaque process ended with the release of Aung San Suu Kyi.

Third, disputed results with painful consequences. Iran, scene of violent confrontation with no apparent positive outcomes for anyone but the ruling elite. Afghanistan, where elections seemingly mired in corruption led to the US and its partners supporting the least worst outcome – the continuation in power of President Karzai. Belarus, where protests about fairness were swiftly suppressed.

Finally, too soon to tell. Egypt, where not a single one of the 88 Muslim Brotherhood opposition members of parliament managed to be re-elected in the first round of voting. Ivory Coast, which currently has two claimants for the presidency in a military stand-off. Sudan, where a referendum on dividing the nation looks certain to deliver dramatic change, not necessarily for the good, to the beleaguered Sudanese. Haiti, where the mere staging of elections is a miracle in itself.

Democracy comes in many forms. The democracy of ancient Athens was often a vicious process in which an enfranchised minority behaved as a rabble roused by ambitious demagogues intent on pursuing personal agendas and vendettas. The same went for the Roman Republic. The “democracy” practiced in the Saddam-era Iraq and the soviet communist regimes of the last century were charades resulting in overwhelming verdicts in favour of entrenched regimes.

Modern variants provide an appearance of competition, but among competitors handpicked for their acceptance of the status quo of the real power structures. Many regimes claim that their systems of government, which involves processes of consultation without elections, are in themselves valid systems of democracy.

However we define democracy, just government is a delicate organism which requires the right environment and nutrients in order to flourish – respect for human rights, the rule of law, absence of corruption and above all the perception of justice and fairness by a nation’s citizens.

It’s fair to say that for many, the concept held self-evident by the founders of the world’s most powerful nation – government for the people and by the people – is as far from a reality at the end of 2010 as it was at the end of any other year in this troubled century.

For 2011, perhaps the best we can hope for is modest successes, and for the voices of people of goodwill to be heard more clearly above the clamour of hatred, self-interest and greed.