A Lesson for Iraq: The Perseverance of Sinbad 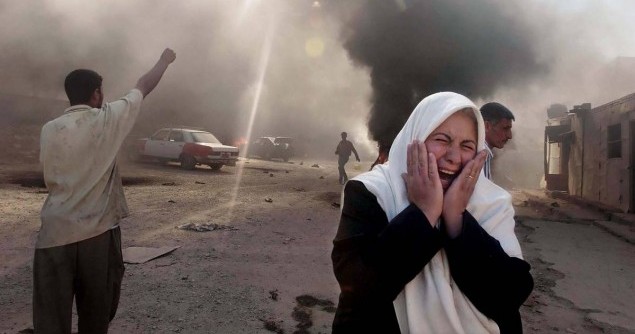 Soon after the joint US-British bombing campaign ‘Operation Desert Fox’ devastated parts of Iraq in Dec 1998, I was complaining to a friend in the lobby of the Palestine Hotel in Baghdad.

I was disappointed with the fact that our busy schedule in Iraq – mostly visiting hospitals packed with injured or Depleted Uranium Victims – left me no time to purchase a few Arabic books for my little daughter back in the states. As I got ready to embark on the long bus journey back to Jordan, an Iraqi man with a thick moustache and a carefully designed beard approached me. “This is for your daughter,” he said with a smile as he handed me a plastic bag. The bag included over a dozen books with colorful images of traditional Iraqi children stories. I had never met that man before, nor did we ever meet again. He was a guest at the hotel and somehow he learned of my dilemma. As I profusely, but hurriedly thanked him before taking my seat on the bus, he insisted that no such words were needed. “We are brothers and your daughter is like my own,” he said.

I was not exactly surprised by this. Generosity of action and spirit is a distinct Iraqi characteristic and Arabs know that too well. Other Iraqi qualities include pride and perseverance, the former attributed to the fact that Mesopotamia – encompassing most of modern day Iraq – is the ‘cradle of civilization’ and later due to the untold hardship experienced by Iraqis in their modern history.

It was Britain that triggered Iraq’s modern tragedy, starting with its seizure of Baghdad in 1917 and the haphazard reshaping of a country to perfectly fit the colonial needs and economic interests of London. One could argue that the early and unequalled mess created by the British invaders continued to wreak havoc, manifesting itself in various ways – spanning sectarianism, political violence and border feuds between Iraq and its neighbors – until this very day.

But of course, the US now deserves most of the credit of reversing whatever has been achieved by the Iraqi people to acquire their ever-elusive sovereignty. It was US Secretary of State James Baker, who reportedly threatened Iraqi Foreign Minister Tariq Aziz in a Geneva meeting in 1991 by saying that the US would destroy Iraq and “bring it back to the stone age.” The US war which extended from 1990 to 2011, included a devastating blockade and ended with a brutal invasion. These wars were as unscrupulous as they were violent. Aside from their overwhelming human toll, they were placed within a horrid political strategy aimed at exploiting the country’s existing sectarian and other fault lines therefore triggering civil wars and sectarian hatred from which Iraq is unlikely to cover for many years.

For the Americans, it was a mere strategy aimed at lessening the pressure placed on it and other allied soldiers as they faced stiff resistance the moment they stepped foot in Iraq. For the Iraqis however, it was a petrifying nightmare that can neither be expressed in words or numbers. But numbers are of course barely lacking. According to UN estimations cited by the BBC, between May and June 2006 “an average of more than 100 civilians per day (were) killed in violence in Iraq.” The UN reserved estimates also placed the death toll of civilians during 2006 at 34,000. That was the year that the US strategy of divide and conquer proved most successful.

Over the years, most people outside Iraq – as in other conflicts where protracted violence yields regular death counts – simply became desensitized to the death toll. It is as if the more people die, the less worthy their lives become.

The fact remains, however that the US and Britain had jointly destroyed modern Iraq and no amount of remorse or apology – not that any was offered to begin with – will alter this fact. Iraq’s former colonial masters and its new ones lacked any legal or moral ground for invading the sanctions-devastated country. They also lacked any sense of mercy as they destroyed a generation and set the stage for a future conflict that promises to be as bloody as the past.

When the last US combat brigade had reportedly left Iraq in Dec 2011, this was meant to be an end of an era. Historians know well that conflicts don’t end with a presidential decree or troop deployments. Iraq merely entered a new phase of conflict and the US, Britain and others, remain integral parties of that conflict.

One post-invasion and war reality is that Iraq was divided into areas of influence based on purely sectarian and ethnic lines. In western media’s classification of winners and losers, Sunnis, blamed for being favored by former Iraqi President Saddam Hussein, emerged as the biggest loser. While Iraq’s new political elites were divided between Shi’ite and Kurdish politicians (each party with its own private army, some gathered in Baghdad and others in the autonomous Kurdistan region), the Shi’ite population was held by various militant groups responsible for Sunni unfortunates. On Feb 8, five car bombs blew up in what was quickly recognized as “Shi’ite areas”, killing 34 people. A few days earlier, on Feb 4, 22 people were also killed in a similar fashion.

The sectarian strife in Iraq which is responsible for the death of tens of thousands, is making a comeback. Iraqi Sunnis, including major tribes and political parties are demanding equality and the end of their disfranchisement in the relatively new, skewed Iraqi political system under Prime Minister Nouri al-Maliki. Massive protests and ongoing strikes have been organized with a unified and clear political message. However, numerous other parties are exploiting the polarization in every way imaginable: to settle old scores, to push the country back to the brink of civil war, to amplify the mayhem underway in various Arab countries, most notably Syria, and in some instances to adjust sectarian boundaries in ways that could create good business opportunities.

Yes, sectarian division and business in today’s Iraq go hand in hand. Reuters reported that Exxon Mobil hired Jeffrey James, a former US ambassador to Iraq (from 2010-12) as a ‘consultant.’ Sure, it is an example of how post-war diplomacy and business are natural allies, but there is more to the story. Taking advantage of the autonomy of the Kurdistan region, the giant multinational oil and gas corporation had struck lucrative deals that are independent from the central government in Baghdad. The latter has been amassing its troops near the disputed oil-rich region starting late last year. The Kurdish government has done the same. Unable to determine which party has the upper hand in the brewing conflict, thus future control over oil resources, Exxon Mobile is torn: to honor its contracts with the Kurds, or to seek perhaps more lucrative contracts in the south. James might have good ideas, especially when he uses his political leverage acquired during his term as US ambassador.

The future of Iraq is currently being determined by various forces and almost none of them are composed of Iraqi nationals with a uniting vision. Caught between bitter sectarianism, extremism, the power-hungry, wealth amassing elites, regional power players, western interests and a very violent war legacy, the Iraqi people are suffering beyond the ability of sheer political analyses or statistics to capture their anguish. The proud nation of impressive human potential and remarkable economic prospects has been torn to shreds.

UK-based Iraqi writer Hussein Al-alak wrote on the upcoming tenth anniversary of the Iraq invasion with a tribute to the country’s ‘silent victims,’ the children. According to Iraqi Ministry of Labor and Social Affairs, he reported, there is an estimated 4.5 million children who are now orphans, with a “shocking 70 percent” of them having lost their parents since the 2003 invasion.

“From that total number, around 600,000 children are living on the streets, without either shelter or food to survive,” Al-alak wrote. Those living in the few state-run orphanages “are currently lacking in their most essential needs.”

I still think of the kindly Iraqi man who gifted my daughter a collection of Iraqi stories. I also think of his children. One of the books he purchased was of Sinbad, presented in the book as a brave, handsome child who loved adventure as much as he loved his country. No matter how cruel his fate had been, Sinbad always returned to Iraq and began anew, as if nothing had ever happened.