A Divided Egypt: Outside Cairo Concerns Mount Over Tahrir Protests 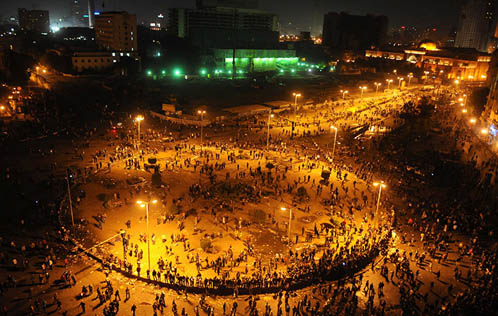 As clashes in Cairo between security forces and demonstrators enter their fourth day, the death toll continues to climb and many Egyptians outside of the capital are shaking their heads in disbelief.

Here in Minya, some 200 km south of Cairo, citizens are following the violence in Tahrir Square with nervous skepticism. They fear that the clashes will disrupt the upcoming parliamentary elections that they view as an essential first step towards building a new Egypt.

Indeed, in Minya and elsewhere in Middle Egypt, the densely populated swath of country straddling the banks of the Nile between Beni Suef and Qena, the populace has been eagerly awaiting new elections. During the past three decades, Middle Egypt was marginalized by the Mubarak regime as it centralized power in Cairo. Thus, these elections offer a rare and welcome opportunity for the citizens of Middle Egypt to secure more equitable representation in the country.

Though Minya is not scheduled to vote for candidates running for the People’s Assembly until the third round of elections to be held on January 3, the city is already plastered with campaign banners and voters are impatient. Emad, a young activist, said, “We wish we could hold elections immediately, the sooner the better.” This is a popular sentiment on the streets of urban centers outside of the capital, where people feel that they are being held hostage by Cairenes’ demands that they neither fully understand nor support.

“Why are they protesting now?” pondered one police officer, who said that he was glad to have recently been reassigned from Cairo to Minya. “Why can’t they wait until after the election and then make noise if they don’t like the outcome?”

The frustration is even more pronounced in Upper Egypt, in particular in the tourist centers of Aswan and Luxor. In the past several months, the attack on the Israeli embassy, the riots in Imbaaba and Maspero, and the sporadic clashes between protesters and the military in Cairo have devastated the tourism industry upon which most of their citizens depend. It is difficult for them to get excited about the new Egypt when the so-called revolution is threatening their livelihoods.

So, while revolutionaries in Cairo are hesitant to accept the election process outlined by the Supreme Council for the Armed Forces, Egyptians outside the capital watch in fear, because it is they who have the most to gain or lose in the new Egypt. Along the over-populated and under-employed banks of the Nile, the citizens are desperate to step forward while their compatriots in Cairo, they say, seem intent on taking two steps back.

– Joshua Maricich, an American writer and analyst, and Will Raynolds, an American architectural conservator, are sailing a twenty-four-foot traditional felucca over 800 miles along the Egyptian Nile in order to document how the Egyptian revolution has impacted citizens outside of the capital and to record their visions of the new Egypt. They are blogging at: http://thenewegypt.tumblr.com

Joshua Maricich is from Washington State. He graduated from Whitman College with honors in anthropology and began his Arabic study at Middlebury College’s intensive language program. He spent 2005-2006 on a Fulbright Fellowship to Jordan. In 2007, he moved to Yemen, where he ran the country’s only English news magazine, and completed his first book about the majestic Old City of Sana’a, a UNESCO World Heritage Site. He is currently living in Cairo working as a Yemen analyst and writing his second book about Yemen.

4 Responses to A Divided Egypt: Outside Cairo Concerns Mount Over Tahrir Protests