A Desecration of Jewish Values: Racism in Israel 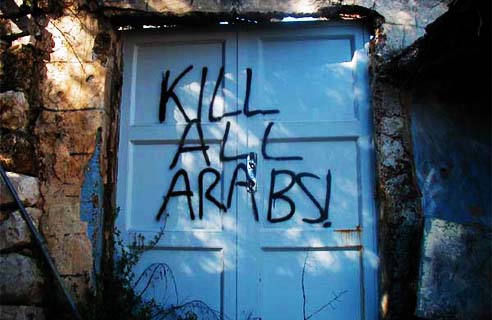 Racism on the rise in many Israeli towns as Jews perceive they are under increasing threat.

There are many disturbing things about the fact that a few dozen rabbis in Israeli official positions who signed on to the initiative of Rabbi Shmuel Eliahu of Safed to persuade Jews to refrain from selling or renting homes to non-Jews in Israel.

Eliahu claims to have “evidence” that Islamist forces are providing money for Arabs to buy up property to promote an Arab demographic takeover of the country, and evidently some of his colleagues have been persuaded that there is an imminent threat.

It is some small comfort that the majority of rabbis approached by Eliahu refused to support his initiative, that the chief rabbis have disassociated themselves from it, and that many notable rabbinic figures have publicly condemned it.

However, the fact that a few dozen were willing to append their names to this deplorable letter not only displays the degree to which fear and paranoia prevail in segments of our society, but also reflects a worrying trend toward greater insularity within the rabbinate in recent years.

Eliahu’s argumentation rests on viewing Muslims and Christians as idolaters as well as a collective threat. However, Chief Rabbi Avraham Yitzhak Hakohen Kook ruled categorically, on the basis of the position of the medieval rabbinic luminary Rabbi Menahem Hameiri who rejected such categorisation of Christians and Muslims, that Jewish law requires a Jewish polity to guarantee full civil rights to its non-Jewish citizens. This ruling was reiterated by his successor, Chief Rabbi Isaac Halevy Herzog.

Inthe summer of 1939, after three violent years in the course of which hundreds of Jews were killed in acts of terror, some Jewish extremists called for and even perpetrated deeds of violent revenge. The Sephardi chief rabbi of the British Mandate of Palestine, Ben Zion Uziel, and the Ashkenazi chief rabbi of Tel Aviv Moshe Amiel issued powerful statements that were widely disseminated, condemning such acts and ideas and stressed Judaism’s unqualified rejection of holding innocents – especially a whole community – responsible for the acts of some guilty individuals.

The third Ashkenazi Chief Rabbi of the State of Israel, Isser Yehuda Unterman, issued a learned pronouncement to emphasise that the Jewish legal precept of “the ways of peace” that demands the highest ethical conduct toward non-Jews is not a “defence mechanism,” but represents the highest moral aspirations of Judaism.

However, it seems that many rabbis today are, at best, plain ignorant of these positions and halachic rulings. At worst, they reflect an insular mind-set that represents a sad regression to a medieval view that can see only hostility all around.

While Israeli leaders have condemned this racist advocacy, no legal steps have yet been taken against these rabbis, most of whom are civil service employees and thus in breach of the conditions of their employment by their very involvement in such an initiative. Indeed Israel’s legal authorities have been notably timorous as far as the possibility of prosecution of racist declarations when these have come from rabbinic quarters. Nevertheless there has been a groundswell of civil initiatives, including many rabbis who are still true to the higher ethical values and aspirations of our heritage, to pressure the attorney general to take the necessary action. As a result he is now investigating ways to take legal action.

Such civil response represents the authentic voice of Jewish morality and is in consonance with the above-mentioned positions of Jewish luminaries of the State of Israel’s earlier history. Rabbi Eliahu and his colleagues represent not only a halachic regression and a capitulation to scaremongering, but they are guilty of nothing less than chilul hashem, a desecration of the Divine Name, and an embarrassment to our Jewish heritage.

This article is published courtesy of the Common Ground News Service (CGNews).

Rabbi David Rosen is international director of inter-religious affairs for the American Jewish Committee and interfaith advisor to the Chief Rabbinate of Israel.

One Response to A Desecration of Jewish Values: Racism in Israel