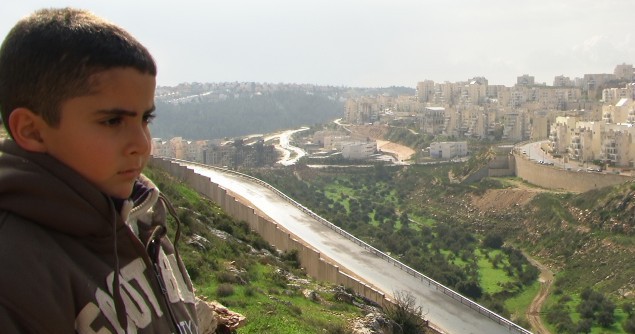 Those who watched Emad Burnat’s 5 Broken Cameras were perhaps reminded of Palestinian cartoonist Naji Al Ali’s iconic character, Handala – a barefooted boy whose role in Al Ali’s drawings is to stand and bear witness to the tragedy that transpires before him.

His hands are folded behind him, and he barely ever participates in the always poignant message of the artist, but he is very much a component of the story, his defiance is a palpable expression of the defiance of his people. Al Ali drew an estimated 40,000 political cartoons before an assassin took his life in London in August 1987.

Burnat’s cameras, five to be exact, were the Handala of a small Palestinian village, Bil’in, 12 kilometres west of Ramallah in the West Bank. After a journey that lasted nearly eight years, Burnat – who was confronted with death several times during the 700 hours of filming – was in Los Angeles this week, along with his wife and son Gibreel, anticipating an Oscar for Best Documentary.

It is not easy to disentangle the immensely complex personal, social, political and other experiences that would take Burnat, a farmer from a secluded village with a population of 1,800, to the Oscars.

The boundaries of the non-fictional story, which the man narrates with simple, yet heartfelt language, and an accent that is distinct to that part of the West Bank, however, extend to include the entirety of the Palestinian experience under the Israeli occupation. The same characters – scheming settlers, armed-to-the-teeth soldiers, villagers demanding access to their land – were all intermingling within the same ominous landscape of land confiscation, settlement construction and the uncountable drops of tears and blood that need to be exacted to ensure that an ever-predictable outcome is achieved: ethnic cleansing of more Palestinians.

Aside from the originality of the idea behind the film, where the cameras are actual actors and victims, Bil’in is also slated within overlapping political contexts, which itself makes Burnat’s journey to the Oscars particularly apt.

In 1995, the village fell under Palestinian Authority administration, which was then celebrated as a victory for the peace process, initiated in Oslo a couple of years earlier. That supposed semi-liberation of Bil’in and many such villages didn’t last long. In fact, it seems that the whole exercise of handing jurisdiction of Bil’in to Palestinians was more like an imaginary exercise of false sovereignty than an actual political event.

Illegal Jewish settlements continued their fervent expansion at the expense of the small village, as well as many other Palestinian villages. The Modi’in Illit settlement, which was granted city status by the Israeli government in 2008, became notorious for the violent tactics of its residents aimed at stealing more of Bil’in’s land. Burnat’s film documents many such events; some are too upsetting to watch.

PA officials do in fact make one quick appearance in Burnat’s documentary, where some are smartly dressed and escorted by bodyguards, to make one fiery statement or another, then, quickly disappear.

The fate of Bil’in – as a microcosm of a much larger political landscape – is left to its people, whose courage is constantly juxtaposed with the brutality of the Israeli army.

It is most telling that Bil’in has fought mostly alone, armed only with the tenacity of its residents and their love for their land. The fact that none of the buzzwords related to the Oslo “peace process” and all of its manifestations seemed of any relevance to the unfolding drama in Bil’in was enough of a testimony to the reality underway in Palestine: where people attempt to survive ravenous Israeli colonialism, while Palestinian political elites are engaging in the same futile political escapism for nearly 20 years. The PA’s relation to Bil’in, which launched its own legal battle against Israel, and won, remains unchanged: a photo-op at best.

Burnat, empowered by the story of his village, managed against great odds to “get the story out”, a tireless Palestinian plea throughout the years. Some of his film’s loveable characters were killed or imprisoned during the filming, thus were denied the chance to take part in what must have been a triumphant moment for the inhabitants of Bil’in, although 5 Broken Cameras failed to snatch an Oscar.

However, as Burnat and his family walked the red carpet, which must have been a rare opportunity to escape the constant struggle of their village, the West Bank was in an uproar over the death of Palestinian inmate Arafat Jaradat, a 29-year-old petrol station attendant from Hebron Al Khalil.

According to Palestinian officials, autopsy results showed that Jaradat, a father of two, was tortured to death in Megiddo prison at the hands of Israeli interrogators.

The young man’s death comes at a time when several Palestinian prisoners have been staging lengthy hunger strikes, and a few, including Samer Issawi, are nearing death. What is being referred to in the Palestinian street as the “prisoners’ uprising” further accentuates the growing irrelevance of official Palestinian policy, the infighting between factions, and all the other wrangling involving Israel and the PA.

That ever-growing detachment between the Palestinian leadership and ordinary Palestinians was most apparent in the response to Jaradat’s death. The tragic end of Jaradat quickly crossed the threshold of anger at the torture and death of a Palestinian man, held on charges of stone-throwing, to include all grievances that have been commonplace among most Palestinians for many years.

In response to massive upheaval provoked by Jaradat’s death, PA President Mahmoud Abbas, reported the Israeli daily Haaretz on February 25, met with his “security chiefs in Ramallah and instructed them to enforce calm in the West Bank”.

Indeed, the role of the PA over the years has been reduced to allotting salaries and ensuring calm. While the PA’s budget is insufficient to accommodate the economic needs of the Palestinians, losing its ability to ensure “calm” simply means that the services for which it was founded and sustained with Israeli consent and US support, throughout the last two decades are no longer needed. It also means that the Palestinians are completely on their own, as Bil’in was left alone defending every olive tree, and every dunum of its land in the face of armed settlers and soldiers.

And like Bil’in, the rest of the Palestinian community would have to develop its own strategy, independent of all broken promises, non-existent “peace process”, and international handouts.

The uphill battle facing Palestinians this time is most difficult. Confronting the enemy without also requires defeating the enemy within. Bil’in’s battle was not necessarily victorious, despite the fact that an Israeli court returned some land back to villagers, while bestowing the rest on the settlers.

But what Bil’in demonstrated is that if a single village is capable of sustaining a fight for its rights throughout the years it took Burnat to shoot his film, then Palestinian society as a whole is equally capable of enduring such a battle. And if Bil’in has done so without the consent or blessings of the PA or any faction, Palestinians too can finally redeem their independence as a collective.

At the end of 5 Broken Cameras we learnt that Emad Burnat acquired a sixth camera, not only a testimony to the resilience of the Palestinian farmer and father of four, but also an indication that Bil’in’s fight is not yet over, nor is the greater fight that will eventually unite all Palestinians.