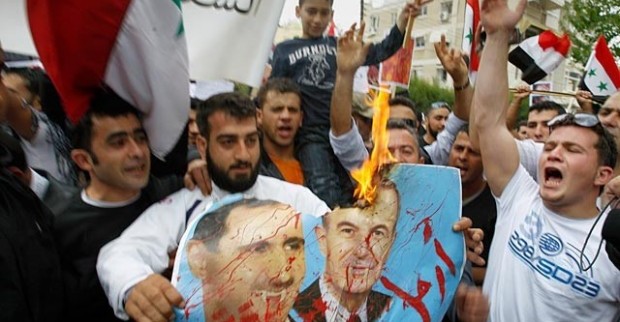 I was sitting in Rawda Cafe, opposite parliament on February 4, the day a protest was called on Facebook. It turned out to have been called by a Swedish member of the Muslim Brotherhood. No-one turned out. The place was crawling with men in black leather jackets (inside the cafe and outside).

In March a small, brave group marched through Souq Al-Hamidiyeh chanting slogans and recording the whole thing on their mobile phones. Still, we said, nothing more would happen. And it might not have, if a group of children hadn’t been arrested and beaten in Deraa in the south of Syria.

They had scrawled revolutionary graffiti on the walls. Children with pens were considered enough of a threat to the state to justify detention and torture. The trouble was, these arrests hit right at the heart of a massive fault line: the kids were from big tribal families in Deraa, and the head of political security was the president’s cousin. This was the tribes against the Assads.

And so it begun. The families called for the kids’ release, they were reportedly insulted and kicked out of the office. Protests ensued. Killings followed. A siege began.

By the end of March, the deaths had started mounting. At the start of April, people stayed awake all night, listening to news of the storming of Al-Omari mosque where rebels had been holed up. Dozens were feared dead. It was the darkest moment in Syria’s history for decades.

People came out in their thousands across Syria calling for an end to the killing. Every Friday the numbers would swell. Peaceful demonstrators would be shot dead across the country. They called for the reform of the regime. But never for its overthrow.

The president spoke. He promised many things but didn’t deliver. Hopes were dashed. The death toll started to fall in April, and there were hopes that this would be a short lived episode. A convulsion. The much-hated State of Emergency was lifted but the arrests continued.

Bashar spoke again in late April, and expectation was high. It was called Bashar’s redemption speech. Many hoped that this would be the moment that he would give people what they wanted: reform.

Instead, it was filled with rhetoric about foreign conspiracy. It offered nothing new. The people began to demand the fall of the regime. The US toughened its rhetoric, telling Bashar that time was running out. It imposed sanctions on him personally for the first time.

May came, and the Friday death toll grew week by week. The army entered Homs.

In June, the army attacked the small border town of Jisr Al-Shughour. More than 100 soldiers were reported killed – the army’s biggest single loss of life in living memory. Around 10,000 people fled across the border into refugee camps in Turkey. Syria’s biggest mass exodus since the Israeli invasion of the Syrian Golan Heights.

In July as the holy month of Ramadan began, Hama was attacked, bringing back memories of 1982. The US called for Bashar to step down, and US and Turkish-backed opposition activists met in Istanbul.

The siege continued for most of Ramadan. And by the end of the month, there were the first tentative calls for foreign military intervention from some Syrians. There were reports of rebels taking up arms.

The Syrian National Council was formed in October, and the Arab League kicked out Syria in November.

Arab League monitors entered Syria in late December and the first suicide bomb hit Damascus. Another would explode a few weeks later, with a third in Aleppo in February.

Syria spent February watching the Free Syrian Army hold Baba Amr, a district of Homs, as the neighbourhood was besieged by the regular army. Thousands fled, many to nearby Lebanon. 2 foreign journalists were killed.

The army defeated the rebels, but the Red Cross was prevented from entering after fighting ceased. Activists say that was to allow soldiers to carry out summary executions of men and boys found hiding in the neighbourhood.

Syria has changed. The high hopes of March 2011 have turned into the despair of March 2012. Syria will not be at peace with itself until the regime falls.