25 Days: The Countdown to the Anniversary of Egypt’s Uprising Has Begun… 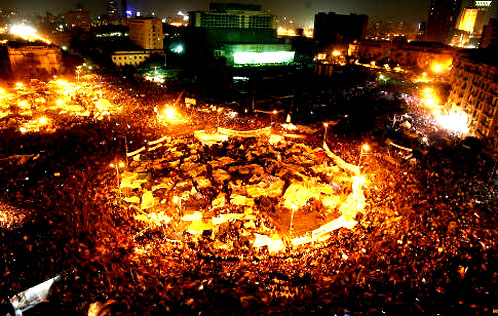 On Thursday, three things happened: The Cairo Criminal Court cleared five police officers of charges over the killing of five protesters in Sayeda Zeinab during the January uprising; prosecutors; civil and military police raided 17 offices affiliated with 10 local and international NGOs in Cairo and Giza on accusations of receiving illicit funding; and “Kazeboun”, a grassroots initiative spearheaded by 20 youth movements, stepped up its campaign to expose military violations through increasing marches and public screenings of videos and images proving lies allegedly perpetrated by the ruling Supreme Council of the Armed Forces.

The three events may seem unrelated, but in fact, they are more related than anyone can possibly imagine.

Announced one day after the resumption of the trial of Mubarak, his ex-interior minister Habib El-Adly and six of his aides on charges of ordering the killing of protesters during the 18-day uprising that toppled the regime, the criminal court ruling is only the second of its kind throughout the past 10 months. Like the only other ruling last May in which officer Mohamed Ibrahim Abdel Moneim was sentenced to death in absentia for (miraculously) shooting 23 protesters, in a verdict whose aftermath is lost in the labyrinth of a web-like legal system which did not explain why Abdel Moneim was never apprehended even though at the time he made a phone-in to Egyptian TV where he said he denied having killed anyone and said he would seek a retrial.

According to news reports, Abdel Moneim was assigned to Cairo’s notorious Zawiya Hamra police station on Jan. 28 when a commander told police officers to fire their weapons to protect the building. The scenario he describes is likely to be accurate especially in light of the implementation of emergency law and of the existence of an inexcusable police law which provides “overly broad powers to police dispersing demonstrations that are not consistent with international standards,” according to a Human Rights Watch report.

Indeed Article 102 of Egypt’s 1971 Police Law No. 109 provides that: “Police officers may use necessary force to perform their duties if this is the only means available. The use of firearms is restricted … to disperse crowds or demonstrations of at least five people if this threatens public security after issuing a warning to demonstrators to disperse. The order to use firearms shall be issued by a commander, who must be obeyed.”

The reasoning for the recent ruling is crucial to the case against Mubarak and his men.

If the judge deemed the police officers not guilty because they were simply following orders in accordance with legal stipulations, then the plaintiff’s lawyers seem to have no grounds to appeal the verdict. While this reasoning could pin the responsibility on the source of the sovereign decree to use force (in this case the Supreme Leader of the Armed Forces and the Police, Mubarak) it does not criminalize this course of action since it permits beyond a doubt the use of firearms to contain riots and protect vital public buildings.

The takeaway from this court scene is simple: Verdicts in the cases of killing protesters are politically-motivated; Thursday’s ruling has paved the way to the verdict in Mubarak and El-Adly’s case, who will in the best possible scenario receive the minimum jail sentence for their crimes.

But for this absurd scenario to pass, SCAF has been setting the social and political stage for months. This is where the NGO raids come in. The steady dose of toxic media campaigns against the so-called “foreign entities” and their “collaborators” which have been receiving illegal funds to hatch up a grand conspiracy against Egypt began during the uprising when military police raided the Hisham Mubarak Law Center on Feb. 3 while thugs stood at the entrance of the building accusing them of being “traitors and agents.”

From the outset, SCAF’s actions have betrayed a mindset that views the uprising as a form of civil disobedience which compromises national security and must be contained with as little “damage” as possible to the domination of the military machine over political life.

Confrontations between SCAF and their detractors, whether institutional in the form of human and civil rights NGOs, or individual through street action, have thus persisted, with SCAF proving its ruthlessness and lack of commitment to real democratic change in every corner.

Beatings, killings, intimidation and black propaganda have been employed “methodically” (to use SCAF General Adel Emara’s notorious refrain in his barefaced public denial of the use of live ammunition against peaceful protesters during the latest Cabinet clashes) to crush the revolutionary spirit of Egyptians in the same way young conscripts are broken in during the first 45 days of obligatory military service.

What SCAF didn’t realize was that their ruthlessness will be crushed with resilience, that Egypt is not a military training ground and that Egyptians will not be beaten into shape, even if their only tools are a projector and a laptop. Enter the “Kazeboun” (Liars) campaign.

The battle to dominate the collective subconscious of Egyptians is approaching a climax.

Naturally political movements, parties and groups are planning to celebrate the first anniversary of the uprising on Jan. 25, possibly through calls for million man marches against military rule. It’s a free country, isn’t it?

But over the past two weeks, SCAF has turned this cause for celebration to a potential apocalypse, casting a dark shadow of fear and horror over the memory of the resurrection of Egypt’s spirit of freedom in a way that reflects their true take on the colossal events that have uprooted their very legitimacy.

The countdown to January 25 has started.