2010: a Year of Failings and Frustrations 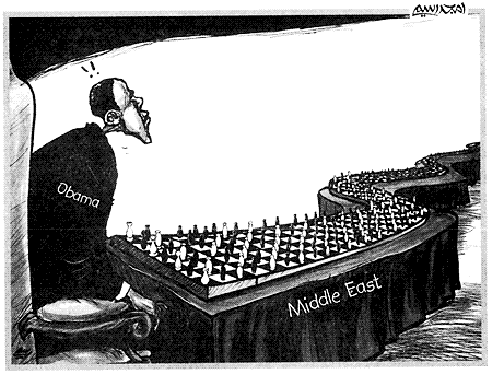 By Amgad Rasim in Asharq Al-Awsat

In many aspects 2010 was an unremarkable year for the region. The great expectations that were pinned on it a year ago had all but dissipated. There were no major breakthroughs in the peace process, the Iraqis went to the polls and waited for months for a new government to be formed, and the impasse between Iran and the rest of the world over the former’s nuclear activities looms large. The conflicts that beset Yemen, Sudan, Lebanon and others are yet to be resolved.

Another year is wasted as the region edges closer towards disaster and uncertainty. The Palestinians find themselves moving farther away from a historic settlement with Israel. The peace process is in deep coma, as one Palestinian official put it. The Obama administration has come full circle in its attempt to revive it and bring the two sides to the negotiations table. Israel has managed to enforce its policy of maintaining settlement activities in East Jerusalem and the West Bank while inviting the Palestinians to negotiate without prior conditions.

The result is catastrophic for the Palestinian leadership. Almost 20 years of negotiations have yielded nothing and the goal of a two-state solution has never looked so remote and improbable as it does today.

As we enter 2011 there is little hope that Palestinian fortunes would be reversed. Their choices are becoming limited and questionable; disbanding the PNA does not appear to be a realistic choice and it is unlikely to be adopted soon, nor does the option of going to the UN Security Council and demanding that Palestine be recognized as an independent state.

Palestinian and Arab bet on a forceful and unbiased mediation by the United States has failed. Moderate Arab regimes can only issue warnings that failing to resolve the Arab-Israel conflict will unleash waves of extremism and bring instability. It is unlikely that their pleas are being heard in Washington.

Failing to revive the peace process means that Israel will continue with its scheme to judaize what remains of Arab East Jerusalem, while partitioning the rest of the West Bank. At the current rate, it will be a matter of few months before most Arab cities and towns are encircled by Jewish settlements and separated from each other. Once the land has been annexed Israel will focus on finding a final solution to the demographic problem!

It is a horrific scenario, but one that is taking shape before our eyes. As Israel succeeds in dislodging the land from its inhabitants, the Palestinian problem will be reduced to a case of stateless people, just like the gypsies of Europe.

President Obama stands to break one more promise to the Palestinians, the majority of whom had built great hopes on his presidency. It is ironic that the one president who was supposed to deliver the dream of independence could be the one to oversee the destruction of that dream.

All is not lost though. But for the current course to be diverted three improbable things need to happen: The Palestinians must reunite and resolve their internal differences, the Arabs must wake up from their slumber and stand strongly by the Palestinians, and the United States must reclaim an independent policy on the Middle East that is at synergy with the goals of its Arab and European allies with regard to doing justice to the Palestinians.

Israel’s greed and self-serving approach to the conflict must be checked if the Middle East is to avoid the repercussions of failure.

On a more hopeful note, the Iraqis appear to have overcome most hurdles in their struggle to form a national unity government after months of despair. A New government was finally sworn in on Tuesday. But this will not be the end of Iraq’s troubles. The country faces many challenges; least of these is the resumption of ambitious projects to rebuild the nation after years of destruction and civil strife.

The United States should complete its troop withdrawal by the summer of 2011, but that milestone is six months away and many things can happen between now and then. How long can the coalition government survive is also a big question that will haunt many Iraqis. Meanwhile, there are other factors involved including the future of Kurdistan, relations with Iran, and ending sectarian tensions.

Lebanon will remain tense as it awaits the pronouncement of the special tribunal on Rafik Harriri’s murder. Hizbollah has vowed to fight a possible indictment of its members in the assassination. On the table are many issues, including the future of Hizbollah’s weapons, the shaky alliances between various sects and political powers and a possible flare-up in fighting with Israel. It is always a safe conclusion to say that Lebanon will witness a hot summer or even a hotter spring in the coming months.

One country that will almost certainly face cataclysmic changes will be Sudan. The South will vote on separation in few weeks and the odds are that it will choose to break away from Sudan. Such important development will be a watershed for the entire Arab world, but for Sudan it will prove both painful and dangerous. One cannot discount the possibility of war erupting between the two parts over territory, minerals and others. It is another challenge to the Arab world which must stand by the injured north as it tries to recoup and move along. Sudan’s problems will not be over as it tries to overcome another conflict in Darfur.

2010 has not been a remarkable year but it proved that the region has failed to learn from its past. Failing to resolve conflicts does not mean that they simply go away and disappear. On the contrary, failing to act on Palestine has brought us to the edge of a political precipice. The same can happen in Lebanon, Yemen and Iraq. If anything Arab failure to confront their problems in 2010 underlines the need to change course and face up to responsibilities.