From Gulf to Ocean the Middle East is Changing 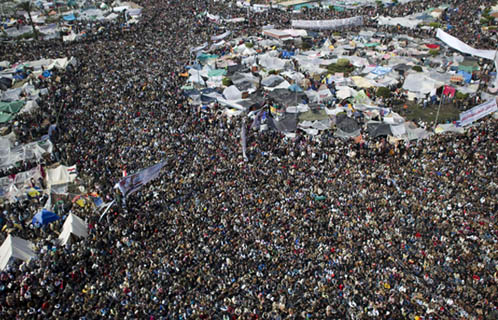 Now that the Egyptian people have finally wrestled their freedom from the hands of a very stubborn regime, accolades to the revolution are pouring in from all directions. Even those who initially sided with Hosni Mubarak’s regime, or favored a neutral position, have now changed their tune.

“Arabs celebrate from the Gulf to the Ocean,” proclaimed a headline on Al Jazeera TV. The phrase “from the Gulf to the Ocean” is not a haphazard geographical reference, but very much a geopolitical one. Ever since former Egyptian president Anwar Sadat defied the will of the Arab collective and chose a self-serving (and according to popular Arab opinion, disgraceful) exit for his country from what was until then the ‘Arab-Israeli conflict’, the above phrase functioned only as an empty slogan. Saddat’s signing of the Camp David treaty in 1979 had effectively marginalized the most committed Arab country from a conflict that was previously defined by Egypt’s involvement. It thus left Israel’s weaker Arab foes as easy targets for uneven wars, and in a perpetual state of defeat and humiliation.

Mubarak’s importance to Israel and the US stemmed from the fact that he guarded Israeli gains for the pitiful price of $1.8 billion a year. Most of this went to fulfill military contracts, upgrade military hardware and subsidize US military expertise aimed at ‘modernizing’ the Egyptian army. Israel, of course, was given almost double that amount and was promised, through a separate agreement with the US, a military edge against its foes, Egypt included.

But Mubarak gained much more than hard cash. His greatest gains were related to US foreign policy in the region. While the US violated the sovereignty of various Arab countries, Mubarak’s regime was left largely unscathed. Free from any effective resistance at home, and any serious criticism from abroad, members of Egypt’s ruling National Democratic Party used the lack of accountability to accumulate unprecedented wealth, at the expense of 40 percent of Egypt’s 84 million people who lived below the poverty line. The ruling party had indeed become a club for millionaires. The barely existing middle class shrunk even further, the working class lived with the dream of finding employment elsewhere, and the underclass – millions of whom lived in ‘random’ neighborhoods, and often large graveyards – subsisted in a most humiliating existence.

All this mattered little to Washington, whose policies have only verified Lord Palmerston’s assertion that “there are no permanent allies…only permanent interests”. Henry Kissinger eventually took Egypt out of the whole Middle East equation, and others followed in his lead, ensuring that Egypt could never act in a way that disturbed Israeli interests. Ironically, it was also Washington that jumped on the opportunity to chase Mubarak – but not his regime – out of power. Soon after Mubarak’s newly appointed vice president read the short statement of Mubarak’s departure, Obama elatedly read his own statement. When he announced that the Egyptian people would settle for nothing less than ‘genuine democracy’, he sounded like one of the guys in the Tahrir square in Cairo, not the leader of the very country that had defended Mubarak’s reign and defined the former president as a ‘moderate’ and a good friend. “No permanent allies,” indeed.

It was also this very Obama – now using poetic language to describe Egypt’s popular revolution – who chose Egypt in June 2009 to deliver his reconciliatory speech to Arabs and Muslims everywhere. Cairo was chosen because Mubarak had been a most faithful friend to the US and Israel. He had rallied the Arabs against Iraq in 1990. He had taken a stance against the Lebanese resistance in 2006. And he had championed Israel’s ‘security’ by sealing off the Gaza border, resulting in the loss of thousands of Palestinian lives. To justify keeping the border shut, Mubarak had cited the Rafah Agreement of 2005, claiming that opening the border could harm Palestinian sovereignty somehow. As it turned out, Egypt under Mubarak was fully involved in suffocating Palestinian democracy, destroying any resistance to Israel and ensuring the success of the Israeli siege.

According to Wikileaks, Omar Suleiman, until recently Egypt’s Intelligence Chief, had, in 2005, made a promise to Amos Gilad, head of the Israeli Defense Ministry’s Diplomatic Security Bureau: “There will be no elections (in Palestine) in January. We will take care of it.” When this promise could not be kept, and Hamas was elected to power, Suleiman invited the Israeli army to enter into Egyptian territories to secure the siege on Gaza. The CIA was also allowed to torture ‘terrorists-suspects’ under the supervision of Mubarak’s goons, Suleiman in particular. A US official praised Suleiman’s cooperation and the fact that he was not ‘squeamish’ about torture. It is important here to note that during nearly three weeks of Egyptian protests, the US pushed for a smooth and peaceful transition of power – from Mubarak to Suleiman.

The determination of the Egyptian people, however, forced all such plans to be aborted. The schemers will continue to scheme, of course, but their options are quickly declining. When Egyptians said they wanted to change the ‘regime’, they really meant it.

Perhaps one of the greatest achievements of the Egyptian revolution is that it was indeed exclusively Egyptian. No American branding companies were hired to manage the moment, no former Bill Clinton advisors were needed to provide consultations to some self-serving opposition. Noone from Cairo called on Washington, London, or even Tehran to come to their rescue. If any such calls were made, they were made to the ‘Arab people’ and to the ‘free world’ to stand in solidarity with ordinary Egyptians as they orchestrated their return as the rightful owners of their own country and shapers of their own destiny.

The Egyptian revolution has shown the world that democracy and freedom in the Arab world needs no military funding, no political doctrines, no Great Middle East Democracy Projects, and no foreign invasions or foreign-backed military coups. It only needs ordinary people to unearth their own, innate and extraordinary strength. The Egyptian revolution has finally restored the power back to the people, a collective experience that many of us will always remember, with pride, and some will always fear, for good reason.