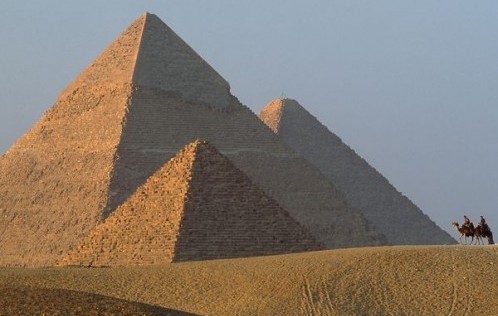 It’s been round for a while so a little light grouting is probably in order. Yes, it’s been standing for more than 4,500 years but the ‘maintenance work’ was just a cover story.

How intriguing, tell me more.  A Polish meditation organisation planned to hold a ceremony near the Pyramid on the palindromic date that was yesterday (11.11.11) to ‘help save the earth from cosmic catastrophes’.

Sounds a bit nutty but entirely manageable. Why the problem? Because as soon as our Polish friends made their intentions known via the internet, ‘the Global Nutty Community’, for want of a better term, thought ‘what a great idea, we should do something too.’

I hesitate to ask but what activities did these groups have in mind?  Groups such as the “Universal Kabbalah Network” and the “11.11.11 Gathering of Souls” announced that they too would be converging on the last remaining ancient wonder of the world to hug, worship or simply climb inside the structure and be healed by the sacred power within. There were also rumours of planned Masonic rituals and the possibility that a Star of David flag would be planted on top of the Pyramid itself.

Just the sort of new age carnival to re-invigorate the moribund Egyptian tourism industry.  Not – which is why the authorities stepped in. Egypt’s ruling generals – whose reputation is in need of a bit of serious buffing – announced on the Supreme Council of the Armed Forces Facebook page: “The [military] council and its members reject completely that kind of celebration in the land of Egypt, which is the cradle of monotheistic religions and should not be desecrated with satanic celebrations.”

But was it just foreigners involved? No the authorities also had to deal with a little ‘domestic nuttiness’ too. According to Ali al-Asfar, director of the Giza complex an Egyptian company had filed a request to hold a “hug the pyramid” event, in which 120 people would hold hands around the base of the structure, but insists official permission was denied.

The Pyramid’s open again though? Now that the key date has passed you’re free to be pestered by men grabbing your ticket at the entrance. They will helpfully direct you towards horses which will transport you to the middle of the desert and return you for the princely sum of $50. Or pay for a good guide and get the true story behind these magnificent structures.