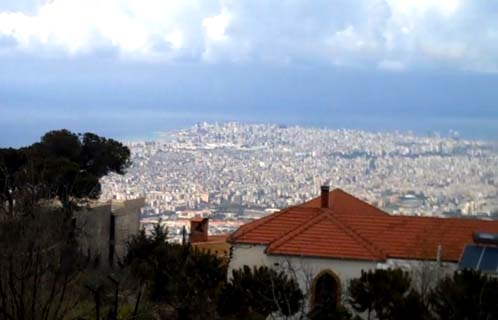 I have a particular fascination for the little village of Shemlan at the moment. It nestles in the mountains high above Beirut, uphill from Aley and  Bchamoun, home to a few shops, a mildly famous restaurant and an orphanage.

Looking out over Beirut from Shemlan never fails to take my breath away. The city is spread out like a glimmering carpet below, the airport runways sitting by the infinite blue Mediterranean.

This was the shortest trip I have ever taken to Beirut in the 14-odd years I have been travelling here, literally 24 hours. My plan was simple enough, have lunch in Shemlan, go to GeekFest Beirut and nip back home. Thanks to Air Arabia and a three hour flight, this is a quite achievable and even fun. That three hour flight gets you into Beirut just in time to check in then spend the afternoon exploring or sitting around and reading newspapers over an Al Maza or whatever else floats your boat. I went up to Shemlan in the company of the delightful Micheline Hazou, patroness of genteel blog MichCafé chatting about life during the civil war, Monday Morning and other stuff as our battered Mercedes taxi groaned up the hilly road.

We had lunch at Al Sakhra, the Cliffhouse restaurant in Shemlan. It’s a fairly traditional Lebanese affair and we sat by the window popping pistachios and drinking Al Mazas as we looked out over Beirut below, dishes appearing from the kitchen with satisfying regularity to populate the table between us. The restaurant itself is fairly large, a favourite meeting place for couples being ‘discreet’, Micheline tells me with a hint of a glint, but also a popular place at weekends. There’s a noisy party near us, filling one of the long tables set out in the conservatory, celebrating one of life’s events with cloudy glasses of arrak.

The orphanage in Shemlan is the reason for my fascination with the village and the countryside around it, for it was here that the British government-run MECAS, the Middle East Centre for Arabic Studies, was located until the civil war forced its closure in 1978. MECAS reported through the British Embassy in Beirut. It was here the infamous Kim Philby learned his Arabic and it was from here George Blake was taken to London to be arrested on his arrival, finally unmasked as a Russian double agent, in 1961. The Lebanese, unsurprisingly, refer to it as the British Spy School.