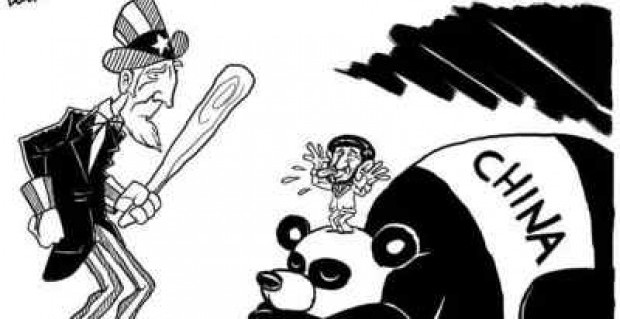 It wasn’t supposed to be like this, the Neocons assured us. Iran would soon be on its knees because of ever more stringent US sanctions on Iran. But Iran just cheekily sent two warships through the Suez Canal to dock at the Syrian port of Tartous. The old Mubarak government in Egypt might not have allowed such a thing, but the Arab Spring has brought to power an Egyptian government eager to demonstrate its independence from Washington.

Brent crude just hit $121 dollars a barrel, the highest in 8 months and a remarkable figure in the absence of a crisis like the Libyan War (responsible for the last big spike). In part, the markets are jittery at the news that Iran is cutting off oil deliveries to the UK and France (Iranian petroleum accounts for only 1 percent of UK imports, and 4 percent of French ones). The Europeans will just find other suppliers or will end up buying Iranian oil through third parties, so the announcement isn’t that significant, but oil traders are a jittery lot. The oil sanctions plan foisted on the United States by Israel and the US Israel lobby pledged that the sanctions would not put the price of oil way up. But in fact, they have contributed to higher prices in part because of speculation on war talk.

As prices in February hit a historic high for this time of year, presaging perhaps $5 a gallon gasoline this summer in the US, Iran is still sitting pretty. The fragile European and US economies, however, may take a hit from higher transportation costs (the US will likely see a fall in summer travel and internal tourism). The same Republicans who complain that President Obama hasn’t been hard enough on Iran are cynically planning to campaign against him on his having caused higher petroleum prices, ignoring the role of sanctions on Iran and tensions with that country in the price run-up! I hate to say it but I told you so.

So what has allowed Iran to fight back against the draconian US-Israeli-European sanctions regime?

10. US and European Union financial sanctions look set to cut Iran profits on its petroleum by roughly 10 to 15 percent by raising transaction and insurance costs. But Iranian saber-rattling about the Straits of Hormuz, for instance, along with Israeli and American warmongering rhetoric, has caused a 10 to 15 percent increase in petroleum prices on speculation over hostilities. That is, from Iran’s point of view the negative effects of the sanctions on oil profits have been cancelled out by the positive effects of the war talk.

9. The sanctions plan against Iran advocated by Israel-lobby intellectuals Mark Dubowitz and Reuel Marc Gerecht (a former CIA analyst) was deeply flawed because it did not take into account the likelihood of supply disruptions (South Sudan, Syria) or of increased demand (India, Japan, South Korea, China), as John Kemp cannily explains.

8. Saudi Arabia has been unable to ramp up production quite as much as it boasted it could to US and European allies. In part, Saudi’s reserves are declining by 3% a year, which few analysts seem to have taken into account.

7. South Sudan abruptly halted petroleum exports through Khartoum in a dispute with Sudan over its “theft” of some of the oil. That step took 350,000 barrels a day off world markets.

6. Likewise, Syria’s uprising has closed down oil production of nearly 400,000 barrels a day, and there have been problems in Nigeria. Thus, not only couldn’t Saudi quite add 2 million barrels a day to world production, but its increased output was in part offset by cutoffs elsewhere.

5. India has insisted on continuing to buy Iranian petroleum and on trading with Iran, much to the dismay of the US government. But given the tightness of world petroleum supplies and increasing Asian demand, it is difficult for me to understand why Nicholas Burns thought Delhi could do without Iran’s petroleum. In part, making sure consumers have subsidized petroleum is an election issue in India

4. South Korea and Japan don’t believe that they can replace Iranian petroleum imports from other suppliers, and so have politely told Washington and the Neocons to jump in a lake over boycotting Iranian oil.

3. Turkey is also bucking US pressure to buy from Saudi Arabia rather than Iran. Some analysts doubt that Saudi Arabia can keep up its current 11.8 million barrels a day, and if the output fell, Turkey might be scrambling for new contracts in an even more competitive world of six months or a year down the road.

2. Iran and China have agreed on an oil deal that will boost Chinese imports from Iran. China has been completely impervious to Washington’s attempts to strongarm it into compliance with the US boycott of Iran.

1. Iran is still being supported by its neighbors, who need its aid. Iraq wants a waiver, being deeply dependent on trade with Iran. And, at a tripartite summit between Afghanistan, Iran and Pakistan, Pakistani president Asaf Ali Zardari underlined that outside pressure could not undermine good relations between Islamabad and Tehran! Pakistan has an energy crisis and is seeking electricity and fuel from Iran. So, basically, US allies Afghanistan and Pakistan are paying no attention to American attempts to get them to join a boycott of Iran; in fact, they are openly defiant on this score. The three are even talking of some sort of regional bloc that would include China!

The last crackpot Neocon plan, the invasion of Iraq, ended up costing Americans about $1 trillion so far and nearly 5,000 soldiers killed. their Iran gambit looks set to triple all the costs of the Iraq fiasco, or more. Write your congressmen and put blame where it is due, on AIPAC.

One Response to Ten Ways the Iranians Are Beating Sanctions