The Dynamics, and Players in Saudi Succession 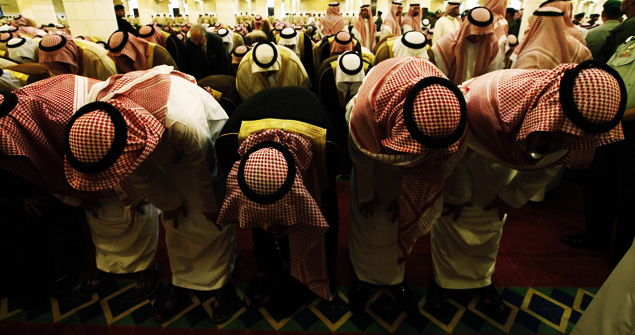 The key positions in Saudi Arabia are still mostly held by sons of the founder the modern Saudi state, Abdulaziz Al Saud (or Ibn Saud, as he is commonly known).

This means that those in power are often exceedingly old and thus in ill-health and the death of two Crown Princes within nine months testifies to this concern.

[Editor’s note: the succession rule in Saudi Arabia is termed ‘agnatic’, in that the next in line is the next eldest brother of the King, subject to suitability – and not necessarily the eldest son of the monarch. This means the King is likely to be older than in other monarchies where succession is passed onto a younger generation. It will also present problems when it is the next generation’s turn… After the brothers have run out, who is the first in the next generation].

There is a paradoxical issue here. On the one hand, the passing of power from one man to the next does not make a huge amount of difference. Change in Saudi Arabia occurs at a glacial pace. There is just no room for a new, dynamic leader to take the top job, ‘clean house’, and institute significant changes. Thus, there is no real concern that immediate policies and practices will change.

However, simultaneously, Saudi Arabia’s politics is heading towards a cliff of some description. It is running out of sons of Ibn Saud and the stints in power of coming Kings will necessarily be short. There need to be practices and procedures in place to manage the transition to the next generation, the grandsons of Ibn Saud.
ole if it is allowed to by the more powerful Princes.

Another key piece of the succession pie lies in the blocks of power within the Kingdom.

The Sudairis
Carrying a disproportionate amount of sway are the descendants of Ibn Saud and his marriage to his favored wife, Princess Hassa bint Ahmad al-Sudairi. Former King Fahd was the leader of this block and held power – nominally at least – from 1982 to 2005 allowing several Sudairi to be firmly inculcated into seats of power in Saudi Arabia. Despite this ‘good start’, this branch has suffered recently so some degree, with the deaths of Crown Prince Sultan in 2011 and Crown Prince Nayef.

Nevertheless Sudairis still include Defence Minister Salman, Deputy Minister of Interior Prince Ahmed, a former Deputy Minister of Defence Prince AbdulRahman, and Prince Turki, who seems to be agitating after his return to Saudi Arabia for a position.

The Faisals
Successors to King Saud, the immediate successor to Ibn Saud, the current long serving Foreign Minister, Saud is the leading Faisal member. Other prominent Faisals include Prince Khalid who has the centrally important role as Governor of Mecca, and Prince Turki who was the intelligence chief from 1977-2001. Turki was subsequently Ambassador to America and the UK, but subsequently disappeared from view for some time, though he retains a latent importance.

The Abdullah faction
The current King, Abdallah, has, so to speak, his own faction. He forged his place as head of the well regarded Saudi Arabian National Guard (SANG) from 1962-2010 as key to balancing to the ordinary Saudi Arabian Land Forces under Sudairi control. His problem stems from the fact that he has no full brothers in key positions, so his power has been invested in his sons.

Miteb was recently given charge of the SANG in a move which guarantees that he will be powerful for the foreseeable future, while Khalid is on the Allegiance Council, Mishal is the Governor or Najran province, and Abdulaziz as an adviser in the Royal court.

Salman bin Abdulaziz (b.1936, Defence Minister). Elevated to Defence Minister in November 2011 after being Governor of Riyadh. In his 9 months at the MOD he became highly respected for his work ethic and his desire to implement changes to the archaic practices and procedures. He is widely seen as likely to be elevated to Crown Prince.

Muqrin bin Abdulaziz (b.1945, Saudi Intelligence Chief) A Minister with a key portfolio and an impressive track record in his post. Moving him would be a tricky matter and he does not have a good lineage, with his mother being non-Saudi. Unlikely to become Crown Prince. Could move to Defence, but will probably stay where he is.

Khalid Bin Sultan (b.1949, Assistant Defence Minister) Performed poorly in battle in Yemen in 2009 and thus was not elevated to Minister of Defence when his father died. Given this public rebuke, he cannot become Crown Prince, but could conceivably finally become Minister of Defence if Salman becomes Crown Prince, though this is far from guaranteed.

Bandar Bin Sultan (b.1949, Former Ambassador to America) Formerly a hugely important figure who has more recently been lost in the proverbial desert. Despite this and his non-traditional lineage on his mother’s side, he is a widely respected figure who could play some role.

Saud Bin Faisal (b.1941, Foreign Minister) Widely respected but old and ill. There has been talk of him stepping down from the Foreign Ministry so taking on another role would seem to make no sense.

Prince Turki Bin Faisal (b.1945, Former intelligence head; UK & US Ambassador) Still an influential and ethereal figure today. A chequered history, though, and a decidedly non-conservative streak suggest that he will not be promoted.

Mishaal Bin Abdulaziz (b.1926, Former Defence Minister, Governor of Mecca, Chair of Allegiance Council). Far too old even in a Saudi context to be considered.

Ahmed Bin Abdulaziz (b.1941, Deputy Minister of the Interior, Deputy Governor of Mecca) Largely overlooked thus far, Ahmed nevertheless has a strong reputation and could conceivably find himself with another job in the coming weeks.

Mohammed Bin Nayef (b.1959, Assistant Minister of the Interior). He has earned an excellent reputation in the MOI for improving its counter-terrorism and intelligence abilities though being a worldly, un-dogmatic, and diligent worker. Would have been a clear leader to be a future Crown Prince had his father lived to be King. Will still be among the key contenders; he is the son of a key Sudairi after all, though he is very young.

Khalid Bin Faisal (b.1940, Governor of Mecca) The Governorship of Mecca carries with is significant responsibility and prestige. He has been in the post for five years now. He is one of the older candidates of those not a son of Ibn Saud, which in the Saudi context could be significant.

Abdulaziz bin Salman (b.1960, Minister of Oil) His position as Minister of Oil guarantees him a prominent role in Saudi Arabia. It remains to be seen how much Salman will seek to elevate him.

Miteb bin Abdullah (b.1953, Commander of SANG) In control of arguably the most potent army in Saudi Arabia and carries significant sway. Certainly a potential for future Crown Prince, though it depends upon whether his father can make a deal to see this come to fruition after he passes, or whether he can arrange a ‘second Deputy Prime Minister’ spot as he did for Nayef in 2009, effectively lining him up to the throne.

Mishaal Bin Abdullah (Governor of Najran Province) Najran Province borders Yemen and is thus of huge strategic importance to Saudi Arabia. This kind of ‘training’ can be played upon to secure his future elevation in position.

One Response to The Dynamics, and Players in Saudi Succession