Shisha: A Living Tradition Worth Preserving? 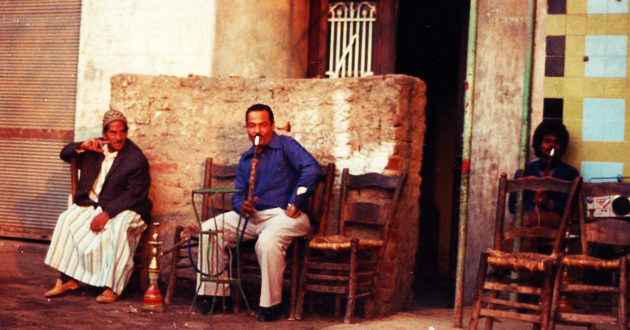 There has been much talk about Shisha in recent weeks.

The Saudis plan to ban it within the Makkah city limits. The Bahrainis are considering loosening restrictions applying to its use in hotels.

I’m with the Bahrainis, provided it’s confined to outdoor locations.

I mentioned in my previous post the café near my home, where I can take an Arabic mixed grill and sit among the shisha smokers as they chat, laugh, play dominos and cards and spend a few hours in peaceful contemplation. The other day I was in Abu Dhabi, and found myself in a café near the Marina. Again full of shisha, though in this case there were as many groups of women and couples as single men enjoying the evening breeze. In my Bahrain haunt it seems to be men only, except when my wife and I invade the sanctum.

This pic comes from Cairo, by the way, not Bahrain.

As a smoker, I’m a bit of a libertarian about ingesting things that harm you, though I draw the line over habits that can harm other people in the process. In that category I would include anything that induces physical or emotional violence, debt or road accidents.
Shisha does none of those things. And as I watch old and young drawing on their pipes, I think of a comparable street scene in my native UK.

Young clubbers and pub-goers lurching around the street, some throwing up against a lamppost, others collapsing in a heap on the pavement, the odd fist fight (or worse). An unfair comparison, perhaps. But such weekend scenes in Britain’s big cities have become regular fodder for the social hand-wringers who lament the breakdown of our social cohesion (more of a cyclical downturn, I reckon – they should remember the 18th century booze binges so graphically portrayed by Hogarth).

Yes, governments have a duty to point out the hazards of smoking, and should include the consequences of shisha consumption in those warnings – though I doubt if those who partake would appreciate stickers of diseased lungs and rotten teeth adorning their decorous water vessels.

But shisha is one of the great social traditions of the Middle East. Given the choice between having my ears blasted out and my brain sozzled in some club, and a quiet evening on the pavement taking in the fruity aromas of shisha smoke, I know what I prefer.