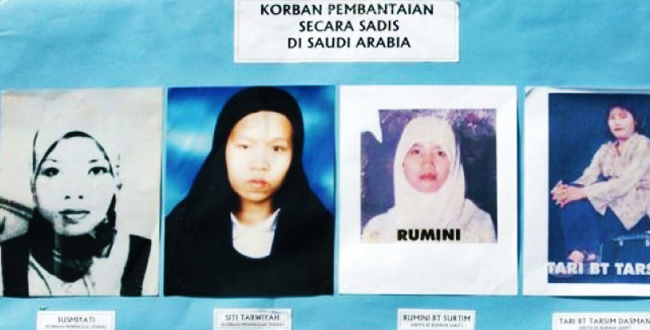 In his column for Saudi Gazette, Tariq Al-Maeena wonders how Saudi Arabia can continue its system of hiring foreign domestic workers that treats some of them as slaves. He notes that sponsors are able to abuse their workers with impunity.

He reports that embassies don’t always work very hard to support their citizens and that Saudis have a way of turning a blind eye to things they consider ‘none of my business’, even when what they’re refusing to see is immoral. Certain parts of the Saudi government certainly focus on immorality, but clearly the tether of the Commission for the Promotion of Virtue and Prevention of Vice does not reach across the lines of private contract.

My column last week on the plight of three Keralite nurses stranded in this country by their sponsor without their dues has prompted a reader to send me another instance of inhumane practices exercised by some Saudis in the treatment of their workers.

A representative of an NGO called “Pleace India” (Pravasi Legal Aid Cell) has forwarded me the story of yet another atrocious act against a human being and exercised by none other than the worker’s sponsor.

In this case, the story revolves around an Indian woman who had come to work in the household of her sponsor more than 20 years ago. At the time she was 25 years old. Her agreed salary was SR400 per month, which was paid to her for the first ten months and then all further payments ceased. There was no reason given, and as she was employed in a village in Hail, the housemaid had nowhere to turn to.

Her working day started at 5 A.M. and ended sometimes after midnight with no rest day, and as stated, no wages after her first ten months. She has complained of physical abuse at the hands of her sponsor whenever she has brought up the issues of what should be lawfully coming to her in terms of compensation. But perhaps the most pitiful and sickening aspect of her story is that she has been practically held as a working hostage for over 20 years…Yes, 20 years without once going home!

Diana Al-Jassem, writing in Arab News, provides the answer behind the abuse: the current system of sponsorship for foreign workers.

Essentially, under the current conditions, a sponsor can apply whatever working conditions, salary, etc., as he likes. There is no general, universal law setting rules on pay or working conditions. With millions doing their own hiring, you end up with millions of variations on the theme. And while the vast majority of Saudi sponsors will treat their workers decently, the lack of rules means that there is no institutional barrier to prevent some from behaving very badly.

I think that is indeed the answer, but it is not a quick solution. The government should make examples of those who abuse their employees, but it cannot do so if there’s no law to enforce. A clearer statement of what is and what is not permissible would help.

The Saudi system of sponsorship, or kafala, is still a topic of heated debate as the unjustified extortion of expatriate employees by their sponsors continues.

However, there have been many instances of sponsors exploiting and mistreating workers under them by various means. A sponsor might take an employee’s passport and iqama (residence permit) or refuse to pay the wage on time. Instead of providing jobs to expatriate workers under them, some sponsors ask them to find work elsewhere and force them to pay a monthly fee. All these are unlawful in Saudi Arabia, but expatriate workers do not complain to the authorities fearing further mistreatment and deportation.

Statistics issued by the Ministry of Labor confirm that about 9 million expatriates currently live and work in the Kingdom. Many of those expatriates are victims of extortion by their sponsors.