Saudis in ‘Tug of War’ Over Women’s Vote 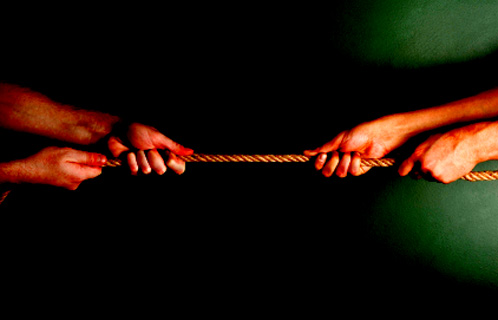 Voter registration for the Saudi municipal elections ends on May 19 and Saudi women have made no progress in persuading the government to give them the right to vote.

Many Saudis have privately expressed their doubts about the wisdom of denying women the right to vote in the Sept. 22 municipal elections. Last month a small group of women staged a protest outside the voter registration office in Jeddah. In Makkah, a woman filed a lawsuit in administrative court against the Ministry of Municipal Affairs for denying women the right to register to vote.

Yet results from a poll released last month by the Riyadh-based ASBAR Center for Studies, Research and Communications conflict with Arab and Western media reports that Saudis generally support women’s right to vote. The study reported that 59 percent of Saudis opposed women voting and 72.5 percent were against women as members on councils.

The 772-page report, titled “The Evaluation of the Elections in the Kingdom of Saudi Arabia,” only gave cursory attention to women’s participation in the municipal elections beyond the fact that poll respondents were not ready to have women cast votes. In fact, the study concluded that “there was a clear increase in the percentages showing the lack of support concerning women’s participating in the elections, whether in voting or as candidates. This was attributed to reasons related to traditions, norms and the weak qualifying of women.”

The study, however, painted a relatively positive portrait of Saudis’ attitudes toward the country’s tentative steps to achieve a measure of democracy.

Perhaps the most striking revelation of the study – aside from its conclusions about women’s rights – was the generational gap in voter interest. Three-quarters of the Saudi men who registered to vote were over the age of 46. Only 40.4 percent of Saudis between the ages of 21 and 29 registered to vote.

Architectural consultant Nadia Bakhurji believes that female voter participation legitimizes the election. Bakhurji said she was planning her candidacy in September’s municipal election when the government announced that no women would be candidates or allowed to vote.

“Honestly, the news was so surprising,” said Bakhurji, a board member of the Saudi Council of Engineers. “In the past two years there have been positive steps in the progress of women and this would have been a natural step. There is no excuse for us not to participate.”

“The municipal council has not said a single word to the public since they were elected six years ago,” said Abdullah, 38, a high school teacher. “What would be the point of voting this year?”

Saudi men began registering to vote last month. Registration closes May 19 while council candidates can register their campaigns between May 28 and June 2. Voters throughout the Kingdom will cast votes for 1,632 seats in 258 municipal councils, a jump from 1,212 seats in 179 councils in 2005.

Saudis initially reacted to the 2005 municipal elections with mixed emotions, but quickly became enthusiastic as voting drew near. The election demonstrated a well-organized campaign by religious conservatives who issued a “Golden List” of candidates. The endorsements from religious scholars resulted in overwhelming victories for conservatives in Jeddah, Riyadh, Makkah, Madinah, Taif and Dammam.

Since the 2005 election, Saudis have heard little from the councils.

“It’s been a complete blackout,” said Bakhurji, who also was the first woman to announce her Riyadh municipal council candidacy in 2005 before the government banned women from participating. “I thought at first that maybe the municipal council was on a learning curve, but to my knowledge there’s hasn’t been very much done.”

The lack of interaction between the electorate and municipal council members appears to be only partly responsible for the lack of enthusiasm among some Saudis for this year’s voting. Political parties cannot organize and campaigning will be limited. And banning women from the polling booth has puzzled some Saudi men. “I understand why women could not vote in 2005, but again in 2011?” one Jeddah lawyer said. “There is no reason this time around.”

Bakhurji insisted that men are ready to vote for women candidates. She said the 13,000-member Saudi Council of Engineers has only 200 female members. Bakhurji was the only woman among 75 candidates running for a board seat and her male colleagues elected her to a second term. She also pointed to Nora bint Abdullah Al-Fayez’s 2009 appointment as deputy education minister and women elected to seats on the Riyadh and Jeddah Chamber of Commerces. “Obviously women are on the path to higher decision-making,” she said.

Dr. Hatton Al-Fassi, an assistant professor at King Saud University in Riyadh, wrote on the Arabic-language website saudielection.com that the government is doomed to “repeat past mistakes” by not permitting women to participate in the September polls.

Bakhurji acknowledged that the “country is divided towards the progress of women” and a “tug-of-war” has developed high in the Saudi government between liberals and conservatives about the pace of women’s rights.

The uprisings in neighboring Arab countries has put the spotlight on Saudi Arabia, which has tread lightly in issuing new reforms since King Abdullah returned from Morocco in February. Charting a path to guarantee more rights for women has taken a backseat to what the government sees as the more pressing issue of economic stability by solving the country’s unemployment among Saudi men. One Saudi journalist observed that a rough-and-tumble fully democratic election might unhinge the country at a time when it needs to keep the economy stable.

Bakhurji agreed that other issues are at stake as the government goes through the delicate process of holding elections. “It is not just about women,” she said. “The problem is universal. It is Saudis versus foreigners. It is about Saudi men not being able to get a job in private companies because they want foreign workers. It’s a disgrace.”