Saudi’s Agnatic Affliction: If it Sounds Painful, It’s Because it is 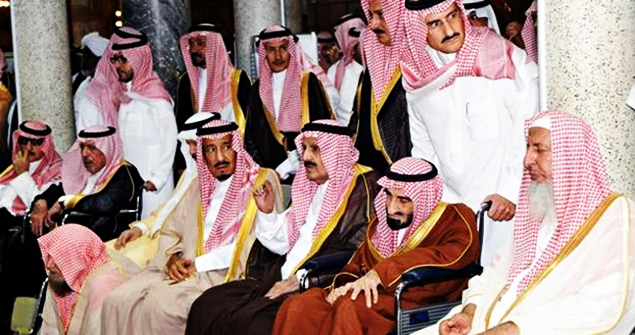 Not really a story that one – done and dusted? Yes the point is for how long before it needs to happen again…

Birth, death… The cycle of life… Very Zen of you. However in Saudi’s case the cycle will continue to speed up until the next generation of leaders are chosen.

Explain… Saudi is unusual in its succession being Agnatic – that is when a leader dies, the next in line is not the eldest son, but the eldest in a family of brothers – subject to ability. That can have advantages, but when the generation in question are octigenarians (the present King is 89), it means you’re limited to a pool with a built in short time span – that’s getting shorter.

The new crown prince, Salman is 76 and reportedly already sickly. So far the crown has been passed down from the founding king, Abdel Aziz bin Saud, to five of his 35-plus legitimate sons. The youngest is in his late 60s.

Great graphic from the Economist below. 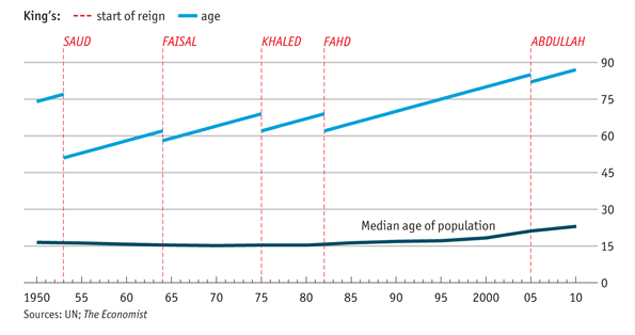 I see what you’re saying… It also means you’re destined to get more rigidity. It’s a generalisation maybe, but the older we get the more set in our ways we are. Looking at Saudi, you’d have to say it’s not the model of dynamic thinking.

So what’s the solution? At some point – preferably sooner rather than later – a new generation needs to be given its chance. The Saudi model has bestowed incredible stability, which at a time of regional upheaval has been a blessing. However as all business school grads know, the danger of a successful strategy is that you hold onto it for too long. The key is to change before you need to.

MidEastPosts believes that time is now.