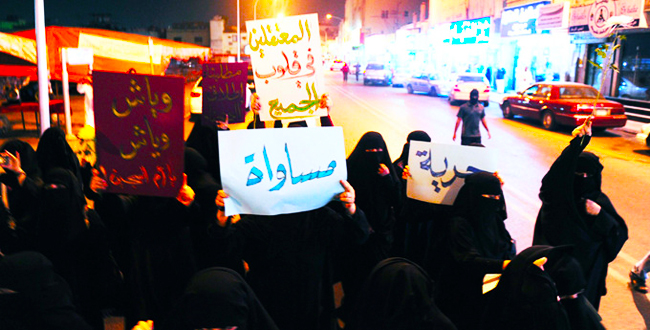 On Wednesday, dozens of women staged a noisy demonstration on campus to complain of filthy conditions, ill-treatment from staff and poor infrastructure at the women’s section. Protesters clashed with security forces and members of the Commission for the Promotion of Virtue and Prevention of Vice. About 50 women suffered injuries when the religious police – also called the hai’a – turned water hoses on the protesters to quell the disturbance.

Two days later, about 500 male students rallied in the university courtyard demanding the resignation of Rector Abdullah Al-Rashid. The students alleged corruption in the university’s administration and the faculty’s failure to provide better curriculum. The men chanted, “Listen, listen, go, go, leave Al-Rashid” and sang the Saudi national anthem. The protesters did not elaborate on their corruption allegations.

King Khalid University is a giant institution, with a student population of about 70,000 in Abha in the Asir Province. It contains the Women’s College and the main campus for men. One male student, who asked to remain anonymous, told The Media Line, the men’s protest had shaken local officials.

“No one paid attention to the women’s complaints, but when the guys protested the administration and the authorities reacted immediately,” said the student who was on campus at the time of the protests but did not participate.

Continuing demonstrations in the Eastern Province since February 2011 by Shiites, who account for about 10% of Saudi Arabia’s population dominated by Sunnis, have authorities on edge. Ministry of Higher Education officials have hinted at outside influence in the demonstrations, but no evidence of external influences in the protests has been given.

Prince Faisal Bin Khaled, emir of Asir region, met with the university officials and promised an investigation into the demonstrators’ complaints. He also established a committee to address student concerns. Yet he had harsh words for the protesters. He described the demonstrations as “demagoguery” and the women’s sit-in as behavior beyond reason.

“There are those who are trying to take advantage of this momentum and enthusiasm by you to destabilize security and the security of this country,” the Saudi media reported him telling male and female students at a meeting on Sunday.

However, Prince Faisal said he did not question the protesters’ loyalty.

“I am here today to listen to your demands and I assure you I will never allow anybody to suspect your patriotism and loyalty to your country,” he said during the meeting. “You are the real assets and leaders of the future [of Saudi Arabia].”

Male students emphasized the issues were non-political, posed no threat to Saudi Arabia’s security and that they were loyal to King Abdullah.

A Saudi woman journalist told The Media Line the women’s protest also was not political, but part of a simmering problem of the Ministries of Education and Higher Education failing to address poor facilities for women in high school and the universities. The Baraim Al-Watan Girls’ School fire in Jeddah last November that killed three teachers raised issue of school safety.

Female secondary schools and universities generally lock down campuses during school hours, requiring students to leave or enter the campus through one gate. Bars often cover windows and emergency exits remained locked around the clock.

The King Khalid University women’s protest covered much of the same ground. “Their big complaint was the filthy conditions of the campus because there was no rubbish pickup and because the elevators in the building, which has six floors, did not work,” said the journalist, who asked not to be identified.

The journalist said the protest collapsed into a “free-for-all” because university officials did not know how to break up the demonstration.

“University staff didn’t know what to do with the students and the police didn’t know how to deal with it because it’s a very sensitive issue when dealing with women,” the journalist said. “They called the hai’a, which got involved and obviously used violence.”

“This is sort of a trend we’ve been seeing in Saudi Arabia,” she said. “We had teachers demonstrating recently over the cleanliness in universities. And we have seen graduates with health services diplomas standing in front of the local civic bureaus asking for jobs because government hospitals will not take them. The hospitals only hire college graduates because they think diploma holders are less qualified. It’s all about jobs.”

Reem said unemployment and corruption among some civil servants are the primary grievances of young Saudi adults. Disturbances in the Eastern Province have had little impact on Sunni Saudis in other regions.

Instead, she said, the breaking point was the 2009 floods in Jeddah that left more than 100 people dead, nearly 11,000 buildings damaged and 10,000 vehicles destroyed. Saudi bloggers and news outlets blamed the Jeddah Municipality’s crumbling infrastructure and a failure to build an adequate drainage system. Dozens of engineers resigned to avoid prosecution on corruption charges.

“Young Saudis matured after the Jeddah floods and no longer accept excuses from local government authorities,” Reem said. “What we are seeing now with student protests is an extension of what we’ve been reading on news websites and blogs about the shortcomings of some of our local decision-makers.”