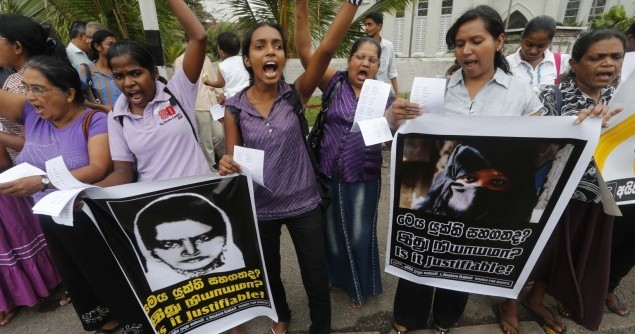 Yahoo.com’s Arabic portal Maktoob reports that there are more than 45 foreign maids on death row in Saudi Arabia. The issue has become a hot one following the execution of a Sri Lankan maid who was found guilty of killing a child in her care when she was only 17 years old. Crimes committed by children are generally treated more leniently than those by adults, in Saudi Arabia as well as the rest of the world. The problem is that in Saudi Arabia, a 17-year-old is considered adult for many purposes… crime and punishment included.

There is no question, though, that the relationship in Saudi society between employers and employees is a difficult one. It’s not likely to be solved until either the country finds it impossible to import their labor or sweeping protective laws are issued.

More than 45 foreign maids are on death row in Saudi Arabia, amid growing global outrage over the treatment of migrant workers, UK’s The Observer newspaper reported on Sunday.

The startling figure, based on estimates from human rights agencies, was revealed after the kingdom beheaded a 24-year-old Sri Lankan maid, Rizana Nafeek, for killing a child left in her care in 2005.

Indonesians are believed to account for the majority of those facing a death sentence. Human rights groups said 45 Indonesian women are on death row, and five have exhausted the legal process, The Observer reported.

There are about 1.5 million foreign maids in Saudi Arabia, including about 375,000 Sri Lankans.

“Some domestic workers find kind employers who treat them well, but others face intense exploitation and abuse, ranging from months of hard work without pay to physical violence to slavery-like conditions,” The Observer quoted Nisha Varia from Human Rights Watch as saying.

According to Sri Lanka’s foreign ministry, Nafeek was sentenced to death in 2007 after her Saudi employer accused her of killing his infant daughter while she was bottle-feeding