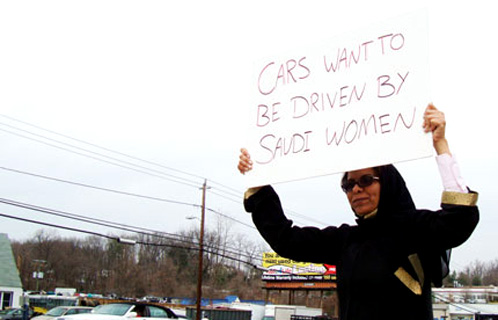 Tucked low in Manal Al-Sharif’s statement to the media this week was a plea to individuals to resist attacking her religious and moral beliefs after she sparked a public debate about Saudi Arabia’s female driving ban.

Saudi municipal police in the Eastern Province released Al-Sharif from jail on May 30. Law authorities had charged her with “violating the public order” by driving in Khobar and then posting a video of her driving on the Internet. In her statement, Al-Sharif said she would leave the driving ban issue to the discretion of King Abdullah. However, trailing in the wake of her release is a tattered reputation.

Al-Sharif said in her statement that she “was stunned to learn of the accusations hurled at my religious and moral beliefs” and the allegations hard caused “serious harm.”

“I held my breath for those speaking in the name of religion and others —May Allah guide them rightly — to do me some justice, and that if I had done wrong to blame me only accordingly and fairly, without defaming my faith, creed, and moral system,” Al-Sharif said.

The statement has become an increasingly common refrain among Saudi women activists and journalists who write and blog about women’s rights issues in Saudi Arabia.

Conservatives anonymously attack outspoken women by questioning their morals and beliefs in Islam. Long-held speech freedoms in democratic countries have made Western journalists relatively thick-skinned to personal attacks. But Saudis view allegations of improper behavior as scandalous and creating great shame among family members. Publicly questioning a Saudi woman’s moral ethics damages not only her personal reputation, but also her professional credibility. Public shaming hurts marriage prospects and the ability to find employment.

As more Muslim women create blogs and write for newspapers and websites, online attacks —particularly in the comments sections of news websites — have grown in proportion.

“Whenever I write an article, I can expect some comments from readers raising questions about my sex life, or they comment on how I look in my photograph. They say I’m not a good Muslim girl,” a Saudi woman journalist told me recently. “Why? Because I wrote an article about equal justice for women in the courts.”

The newswoman said that her brother once read comments about a video interview she gave, and he “cried” about the effect the personal attacks would have on their parents.

“Obviously, some people feel that by attacking women’s religious beliefs and morals, they can silence them into submission,” the journalist said. “It’s almost as if it’s an organized effort to sideline us.”

The smear campaign became apparent in 2009 when 13 Saudi women journalists filed complaints with the Ministry of Interior accusing a local online newspaper of “defaming and distorting the image of the Saudi media.”

According to the English language daily newspaper Arab News, the Kul Al-Watan news website alleged, “that prostitution, alcohol and drugs have become widespread in Saudi society, and that women journalists rely on illicit relationships with newspaper bosses to get support and fame.”

Suad Al-Salim, one of the complainants, told the Arab News: “The report is offensive to Saudi media and Saudi women journalists. Saudi media have been able to build a relationship of trust and integrity with society. How will this relationship sustain after the publishing of this report?”

Last March, the highly respected Arabic language daily newspaper Al-Watan banned popular journalists Amal Zahid and Amira Kashgari from writing. Zahid and Kashgari often write on women’s rights issues. The newspaper citied no reason for the ban, but both women had complained of attacks on their morality without elaborating.

Kul Al-Watan, the same news website accused of defaming women journalists, reported that the firings “followed growing attacks through the Internet against Saudi female journalists as some consider this (writing about women’s rights) against Islam and local traditions.”

Many women journalists and activists continue to write about social causes despite efforts to marginalize them through slander. However, some Saudis have ratcheted up the rhetoric to encourage violence against women. A prominent Saudi sheikh recently announced that women demanding their right to drive a car deserve death, and a group of men created a Facebook page to wage a campaign to beat women who get behind the wheel.

Tougher media laws enacted in Saudi Arabia earlier this year include new standards for slander. The regulations ban individuals from writing “anything affecting the reputation or dignity of, or slandering or personally insulting, the Grand Mufti of the Kingdom or members of the Board of Senior Ulema, or dignitaries of the state or any of its employees, or any person of ordinary standing or any legal person.”

Yet journalists and people like Manal Al-Sharif that fall in the category of “any person of ordinary standing,” receive no such protection under the new law.