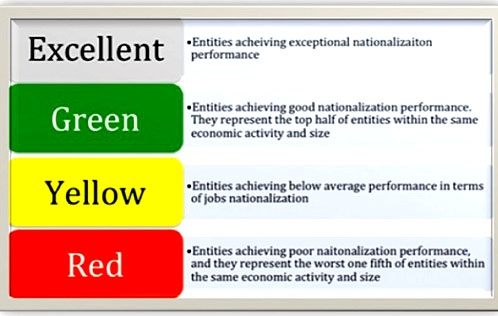 The new nitiqat program of Saudization of jobs and hafiz, the unemployment scheme are presenting opportunities for creative scammers and tinkerers, Saudi Arabia’s media report. In the first, from Saudi Gazette/Okaz, it appears to be the government trying to manipulate their own system. Low-paying, low-skill, low-social-status jobs are being taken out of the nitiqat program. Rather than let Saudi women work as maids and nannies, those jobs have been removed, that is, no quota of Saudis filling the jobs, will be required. I suppose that having Saudi women taking those jobs and claiming minimum legal salaries would drive up the price of non-Saudis in the same jobs. It would at least sow dissension among them as foreign workers receive much lower-than-Saudi-minimum wages for the same work. They would start militating for raises and that would create problems.

The problems already exist, of course, due to the multilevel scale of salaries apportioned to Saudi and non-Saudi employees, with gradations among the latter based on nationality. The problem of society’s deciding which jobs are ‘suitable’ for Saudi women, too, is an obnoxious one. If a Saudi woman wants to work in a job that meets her skill set, society should not be telling her that it’s beneath her dignity.

RIYADH – Female workers have expressed anger over the removal of low skills jobs from the Nitaqat Program website.

Jobs for female cleaners, nannies and others in these categories have been replaced by vacancies for accountants, treasurers, cashiers and librarians that require a bachelor’s degree.

However, a source told Okaz/Saudi Gazette that the Human Resources Development Fund and the labor and finance ministries are studying the low salaries provided to Saudi nationals in the private sector.
…

Arab News reports that a young Saudi discovered that he had miraculously been employed by a company about which he knew nothing and to which he had never applied. He discovered, however, that he had been registered as an employee. Not only was he not drawing a salary for his supposed work, but the fake registration endangered his claim to unemployment benefits while he sought a job he really wanted.

I don’t see how this can be just a mistake. It seems that the ‘employer’ was looking to boost the number of Saudis on his payroll in order to meet nitiqatrequirements.

YANBU: A young Saudi man has filed a complaint at the labor office in Yanbu against a private establishment, which had employed and registered him at the General Organization for Social Insurance (GOSI) without his knowledge, Al-Madinah newspaper reported Tuesday.

Abdullah Massad Al-Rifaie said the establishment offered him SR5,000 to relinquish his complaint, but he refused.

Narrating his story, Al-Rifaie said he received a text message on his mobile about two months ago that he had been registered at the GOSI by a private establishment in Yanbu for a monthly salary of SR1,500.

“Next day I went to the GOSI to ask about the contents of the message and was surprised to find myself being employed by a private establishment for which I did not apply,” he said. Al-Rifaie said he asked the social insurance staff to give him data about the establishment or the phone number of its owner, but they declined to do so.