Norah Al-Faiz: A Living Anomaly in the Kingdom 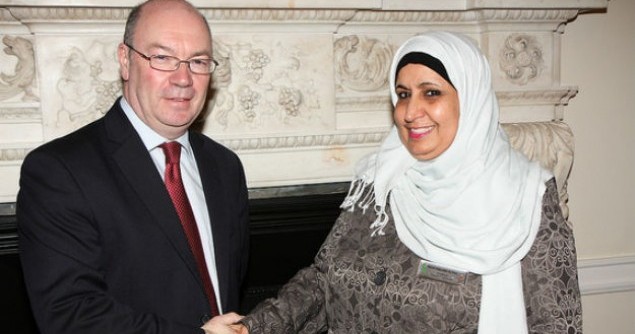 Norah al-Faiz is supposed to be a symbol of progress in Saudi Arabia. She was appointed deputy minister of education by King Abdullah in February 2009, making her the kingdom’s highest-ranking female official. At the time, many observers hailed the move as a sign of reform.

But controversy has dogged Faiz since the beginning of her tenure. When the news of her appointment first broke, the Saudi daily al-Watan published a small headshot of her, wearing a headscarf but showing her face. She reacted angrily, and quickly clarified that she wore the niqab, a black covering that hides the face except for a small slit for the eyes. For Saudi women who wear the niqab, showing their faces in public, let alone mainstream media, is unacceptable.

“The publication of my photo upset me immensely,” she told the newspaper in an interview. “[I]t is well known that I am a Saudi woman from Najd,” she said, referring to the conservative central region of the country, “and thus I wear a niqab. I will never allow the publishing of my photo in newspapers and I will not accept that it be put up anywhere.”

Faiz asked the media not to use any photographs of her and, for the most part, it respected her wish. Upon her inclusion in Time‘s list of the world’s 100 most influential people, the magazine used an illustration of a woman wearing the niqab. In response to questions about how she can work with her male colleagues — given the strict gender-segregation rules that prohibit men and women from working side by side in government offices — she responded that their interactions would be conducted “through closed-circuit TV.” (In other words, she would sit in a different room from her male colleagues and would be able to see and hear them, while they would only be able to hear her voice.)

A woman’s decision to cover her face is a personal choice, and I respect it. But despite Faiz’s repeated invocations of her pious Najdi roots, she does not regularly wear the niqab. And the fact that she feels the need to tell the Saudi media differently raises some troublesome questions about the prospects of those trying to reform the kingdom’s policies on women’s rights from inside the system.

The evidence Faiz doesn’t always wear the niqab is all over the Internet. Walid Fitahi, a well-known Saudi doctor, recently tweeted a photo of Faiz addressing Saudi graduates from American universities in Maryland that showed her wearing a white headscarf. A photo distributed by Saudi Arabia’s official state news agency on the same day shows her in the same outfit, sitting next to Saudi Ambassador to the United States Adel al-Jubeir.

I was surprised, but Twitter followers told me this was not the first time Faiz has appeared in public niqab-free. One of my followers sent me a link to this photo, released by the British Foreign and Commonwealth Office, showing a smiling Faiz shaking hands with Britain’s Undersecretary of State Alistair Burt during their meeting in London earlier this year. There’s nothing wrong with that as far as I’m concerned, but sitting with men and shaking their hands contradicts her self-portrayal as a conservative Najdi woman.

She doesn’t cover abroad and she is not a typical conservative Najdi,” my fellow Saudi blogger Eman al-Nafjan commented on my blog. “She does and says those things to appease people who are looking for any excuse to bring her down.”

If Faiz wishes to don a headscarf, I respect that decision as well. The problem is that she is doing one thing and telling a mass audience the other — leaving Saudis to guess at the reasons for her sartorial choices. Just few months before the above photo was taken in London, Faiz appeared on Saudi TV wearing her niqab — what changed since then? Is she no longer a conservative Najdi woman? Was she wearing the niqab to deter attacks from religious conservatives, who until recently controlled girls’ education in the country?

Some argue that as the first Saudi woman in such a senior position, Faiz has come under unfair scrutiny. Covering her face is a small compromise she has to make to reform the failing education system in our country. If this were the case, then she would hardly be alone: There are many Saudi women who do the same thing. They choose to cover their face or hair in public not because they prefer to take the veil, but because they want the focus to be on their cause or their work, not their clothing.

These sorts of awkward compromises have won women incremental progress in recent years, but Saudi Arabia still denies them many fundamental rights. In September 2011, women were given the right to vote and run in upcoming municipal elections four years from now, and will be appointed to the Shura Council, a consultative body that serves as the kingdom’s quasi-parliament. They still can’t drive, however, and need the permission of their male guardian for things like traveling outside the country or attending university. Efforts by women’s rights activists to push reforms in these areas have fallen on deaf ears in the government.

As for Faiz, does revealing her face suggest that Saudi Arabia has finally become more willing to put women in leadership roles? She’d certainly have you believe that the opportunities for women in the kingdom are improving. “It’s a new stage in Saudi Arabia where the women will be included in the decision-making,” she told Saudi graduates in her U.S. speech, pointing to changes taking place in the education ministry, especially in the curriculum.

But let’s just say it’s hard to take Faiz’s words at face value. After all, she is a government official who was speaking at a government-sponsored event. Out of the 6,000 students celebrated in that graduation ceremony held in Maryland, less than a quarter were women. The real test is to see them assume high positions in the government and the private sector. For now, Norah al-Faiz, with her niqab or without it, remains an anomaly.