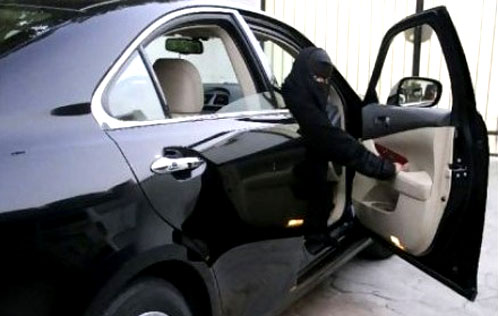 In one heavyweight punch aimed at keeping Saudi women out of the driver’s seat in Saudi Arabia, the country’s religious establishment has apparently conducted a “scientific study” with surprising results, leaving the rest of the world reeling at the absurdity of it all.

In the continuing saga of the controversial battle between those who want to keep Saudi women at home (or in the back seat) and those who want to see Saudi women sitting behind the wheel, the study’s findings seemingly show conclusive evidence that allowing Saudi women to drive would result in the loss of their virginity. How this magically happens is not exactly clear. But Saudi Arabia’s religious scholars are convinced that in all other countries of the world where women DO drive, there are no more virgins left – so they can only assume that this would occur in Saudi Arabia too if letting women drive were permitted.

Saudi Arabian experts have long maintained that in the rest of the world where women can drive, all these women drivers have become immoral sluts – and now these experts allegedly have “scientific evidence” to back up these claims. Not only that, the study also supposedly proves that lifting the ban on women driving in Saudi Arabia would also cause KSA to suffer other effects of moral decline as well, such as a rise in homosexuality, pornography, unmarried sex, and divorce rates.

With a divorce rate already as high as a jaw-dropping 62%, letting women drive in Saudi Arabia would spell certain disaster for the sanctity of marriage in KSA. On the other hand, since the divorce rate is already so high, maybe women drivers would have the reverse effect, who knows? Probably not though, since their study was “scientific,” after all.

The campaign for women driving has gained steam over this past year, with women all over the country quietly taking to the wheel despite the ban. Earlier this year Manal al Sharif was jailed for ten days for driving, and another woman, Shaiman Jastaniya, was sentenced to ten lashes for daring to drive in Saudi Arabia, but was spared that fate by the Saudi king.

Saudi women must rely on male family members for their transportation needs, or are forced to hire drivers or take taxis – situations which place Saudi women in the precarious position of being alone in a car with an unrelated male, which is forbidden by the strict Saudi interpretations of Islam.

In a country where religious police are necessary to keep the population in line morally, this latest “scientific study” comes as no surprise. One of my first thoughts when I read about this study was that if women ever do gain the right to drive in Saudi Arabia, the old perverts in the country will flaunt this study to justify marrying 8 year old girls because there weren’t any other virgins available.