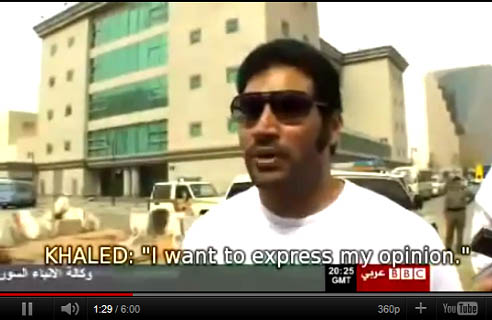 Who is the bravest man in Saudi? Many in the Kingdom say that it is Khaled Al-Johani, a 40-year-old school teacher and father who has been languishing in a Saudi prison since March.

His crime was speaking out in favor of freedom and democracy to a BBC News crew on the much touted (but fizzled) “Day of Rage” earlier this year on March 11 in Saudi Arabia.

Although hundreds of protesters demonstrated in several cities in the Eastern Province of the country, Khaled Al-Johani is the only known person who actually showed up in the designated spot in the country’s capital city of Riyadh to voice his opinions and his desires for change regarding the future of Saudi Arabia.

An overwhelmingly strong and well armed police presence, along with threats of jail or loss of citizenship, discouraged other citizens from participating in the planned Day of Rage. In fact, no one at all in KSA’s second largest city, Jeddah, took part. Criticism of the Saudi government is not permitted and is met with harsh consequences. While many Saudi citizens might agree with what Khaled said, they are too afraid of speaking out.

I am re-posting the below video called “Where is Khaled?” to keep his story alive. Khaled’s family was not allowed any contact with him for almost two months. In May family members were allowed to visit him in prison and reported that “he had lost weight and was depressed.” As far as I have read about the case, he is being detained as a political prisoner without any legal recourse.

In the video, Khaled says, “We need democracy. We need freedom. We need to speak freely. The government doesn’t own us. There is no free media under a monarchy state. The media cannot report freely. They only report the statements of the Ministry of the Interior. They didn’t expect that anyone in Saudi Arabia will dare to speak to the media because he or she will be jailed. We don’t have freedom. We don’t have dignity. We don’t have justice. The whole world is free except us under this country.”

My personal experience living in Saudi Arabia tells me that Saudis love their country and are extremely proud of it.

Khaled spoke out because he loves his country and wants it to be even better. Is this wrong? Should he be jailed for wanting his country to be better?