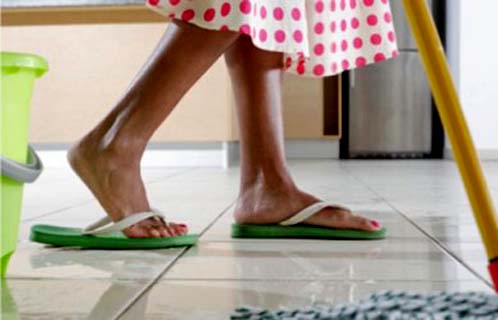 The standoff between the Saudi Arabian and Indonesian governments over the treatment of Indonesia’s domestic workers has put both potential housemaids desperate for work and Saudi households desperate for help between a rock and a hard place.

Indonesia has increasingly been critical of Saudis’ treatment of its workers as a steady stream of reports of housemaid abuse, and in some cases slayings, reached Indonesian authorities. Relations between the two countries reached a low point when Saudi Arabia beheaded an Indonesian maid on June 18 following her conviction for the murder of her employer. Saudi Arabia failed to notify the Indonesian ambassador in Riyadh.

Indonesia responded by issuing a moratorium on sending workers to the kingdom effective Aug. 1. Not to be outdone, Saudi Arabia slapped a ban on issue Indonesians visas starting on July 8.

In 2009, the Saudi Shoura Council, the quasi-legislative body, recommended to the Council of Ministers new protections for expatriate workers in the kingdom’s labor laws. The Council has yet to approve the recommendation. But Christoph Wilcke, a senior researcher for Human Rights Watch’s Middle East and North Africa Division in Berlin, says there has been no improvement in worker conditions since then..

“The Shoura Council’s recommendation has had no impact at all, either as a legal situation because there is no law yet or as a signal to employers or the government to improve working conditions,” Wilcke told The Media Line.

Most Saudi employers prefer documented domestic workers because they are cheaper to hire than illegals. They also have complete control over the employee. Illegals can walk off the job anytime without consequences. Perhaps most important for Saudi employers is the ability to travel abroad with their maids.

“I can hire an illegal maid any time,” says Fauzia Muhammad, 47, a Saudi housewife who employs three Indonesian housemaids to help run her villa. “But I travel to Europe every year for holiday and I can’t take an illegal maid with me. Hiring maids the right way is my only option to control my house.”

Hiring illegal maids presents a whole new set of problems for employers, who face fines of 10,000 Saudi riyals ($2,700) if caught.

Fatmah Al-Harbi, a 36-year-old teacher, says she never hired a documented maid because obtaining a visa is a difficult and expensive process. She doesn’t want to take the risk that a maid will run away. But taking the path of least resistance comes with its own risks. “I do have problems with illegal maids,” Al-Harbi says. “One was sexually harassing my child, and I only found out after she quit. I couldn’t take her to court.”

Saudis prefer Indonesian maids because they are devout Muslims, easy to work with and industrious. Although there are many examples where longtime maids become an integral part of a Saudi family, a prevalent fear among many employers are maids teaching Saudi children their native language at the expense of Arabic, theft and practicing witchcraft to bring harm to the family.

Justified or not, these fears create tension between maids and their employers. It also leads to exploitation of the maid with no time off and withholding salaries.

“I have a good relationship with my madam,” says one maid employed in the Muhammad household. “But I know many friends who never have free time and never see their money. One friend works all day then her madam tells her to go play with the kids, although she’s exhausted.”

For decades, Indonesia enthusiastically sent hundreds of thousands of women to Saudi Arabia to work as housemaids. There is no work for them at home in Indonesia and there are few jobs outside of domestic service available in Saudi Arabia. In April alone this year, Indonesian recruiters sent 58,335 workers to Saudi Arabia and 228,890 throughout 2010, according to Bank Indonesia.

Wilcke says the visa ban will have no impact on the flow of maids to Saudi Arabia. He notes that many Indonesian and Saudi recruiters develop informal procedures to get around Saudi work visas by issuing visitors visas and have laborers enter the kingdom from Dubai.

“If there is ever a problem with the worker, she is not registered with the home country and has no copy of a contract or residency permits. It’s hard to follow up,” Wilcke says. He adds that workers arriving at shelters have difficulty receiving aid because the home country’s embassy has no record of them.

Saudi Arabian authorities have also indicated that they plan to go elsewhere to recruit maids, including Bangladesh, Cambodia and Vietnam. Wilcke says these countries pose even more risks for potential housemaids because they have fewer protections from their home governments in place than does Indonesia. “There is little pre-departure training other than how to use an iron or a washing machine,” he says.

Countries providing labor to Saudi Arabia wield little clout to demand that Saudis provide protection for its workers. The labor-exporting government can’t agree to a minimum wage standard, and this remains the weak link in developing a coalition to create labor standards that Saudi Arabia is willing to following.

Wilcke says the Philippines wants its workers receive a minimum salary of $410 per month. However, Vietnamese workers are willing to work for as little as $130 per month. Countries like Indonesia want worker remittances returned home to feed laborers’ families. Saudi Arabian salaries, for example, account for 44% all remittances to Indonesia.

“Salaries are tricky, but these countries could agree on some issues, such as obtaining more access to the [Saudi] courts and agree on labor protections, such as helping set up a joint labor inspection system,” he said.

This report originally appeared in The Media Line.