A Helpful Guide On How To ‘Drive Saudi’ 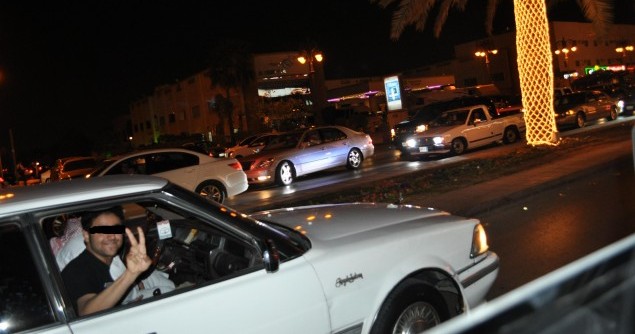 In the US, driving is a series of negations between people defined by rules and policed by meter maids, state troopers and of course the local traffic police on a ticket quota system. Since most of the population are guys and gals over 50 like me (baby-boomers and proud of it), it is easy to see why auto fatalities in the US are the lowest they have been in 62 years.  In the Gulf—and specifically in the UAE– and particularly in Saudi Arabia, the majority of the population are pubescent teenagers looking for thrills in the otherwise uneventful continuum of sand and more sand.

Speed on jet skies, ATV’s and finally cars, (thought to be a daily extension of who they are), are the most often means of ‘macho’ display by choice; so much so that automobile related fatalities are the number one cause of death in the Gulf countries. The weary expat (yes, and he should be very afraid), must forget what he knows to avoid becoming part of the statistical nightmarish reality of ‘ driving Saudi.’

As in the US,  Saudi police are more active during holidays but at other times can usually be seen parked under some roadside canopy sipping tea or the customary Arab coffee mix, a brew of more cumin than bean that is sweetened by a date before each sake like sipping cup.  Though traffic rules are similar to western countries (so much so, showing a current license and paying a few hundred riyals, gets an expat a 15 year Saudi permit to drive) many Saudi youth are not very good about adhering to any rules; particularly those of that interfere with their recreational pursuits.

It has been my observation that ‘official’ driving laws, rules and regulations are only followed if they are enforced.  The cruising traffic police are generally pre-occupied with the complexities of filing reports in a country with the highest auto fatality rate in the world or are far too busy at late night cards games while watching the all important soccer match in the lounge at some police station to give a rats ass about what transpires on the street.

Another thing to consider is that in all absolute governments, dictatorships and tribal societies, it has been my observation that people are not inclined to think in terms of civil spirit or community responsibility. No one cares how the neighborhood looks—perhaps they feel powerless to impact it without an enforced decree. In Saudi, the well to do have servants spruce up their property without thought as to how it may impact his neighbor. I have a landlord I live next door to who frequently has his hired- help hose down his driveway; the sludge of which ends up in my court yard. When I complained to him about this, he merely pointed out that the physical perimeters and construction of his property made this unavoidable. He felt no responsibility for it because it was, as often said in such situations, Laysa Miskilla (it isn’t a problem; meaning, it wasn’t his problem)

This lack of civic concern causes traffic congestion; road hazards that would make road rage the number one cause of death if this type of behavior became common practice in countries such as the US where people have guns and are self medicating. With this in mind, one may expect hapless Saudi drivers blocking streets; entrances and exits to masjids, hospitals emergency zones and supermarkets (as well as simply leaving shopping carts where they block lanes and cars).  Some may even double park behind your car with merely the contention that there was no other place near their destination.

After my initial shock that people would attempt such acts behind the wheel, I developed my own name for them. Below by far, are my favorites.

Without warning, the car ahead of you drifts across as many lanes necessary to get to the desired lane. The only sign you may get from the driver is a hand gesture which generally is an admonishment for you to be patient—and this done if you beep your horn in protest.  If the roles were reversed, the same patience would not be shown.

You are stopped at a light with all kinds of traffic around you in sardine-can fashion ready to make your left when the guy at the lane closest the sidewalk (far right) decides to quickly cut across the traffic to make a left turn a split second after the light changes. If you manage to jerk to a stop before hitting him and give him a blast with your horn,  nine times out of ten you will get the ‘what’s wrong with you’ glare as he makes the turn in front of you.

Traffic is bumper to bumper, door to door and the car who wishes to enter the mess instead of waiting the opportunity, interjects his front or rear assembly into the roadway and completely blocks the flow of traffic until he is allow to join the gridlock.

Desperado (or ‘running the fences’)

The driver keeps his vehicle straddling the dividing line of a lane as if, after deciding to change lanes, forgot what he was doing or figured the position gives him an imagine one lane to himself. Back in the time of eight tracks and before, we called such drivers ‘road hogs.’

The Do’s and Don’ts

For expats to drive on Saudi roads they must forget the motto of US and other western countries that the prerequisite of road safety is road courtesy. There are no yield signs because most drivers go by the credo that the fastest and most daring have the right of way; hence accidents generally are fatal to both parties often in grisly proportions rather than just run of the mill fender bender stuff.

Here are some useful tips for those behind the wheel in Saudi Arabia or the UAE:

The police can be credited to knowing that most non-Saudis aren’t thrill seeking speeders so if you’re a westerner, no need to worry about unreasonable stops unless you’re doing something really wrong.

I have noted that Jeddah police have been more proactive when it comes to maintaining a physical presence than most places I’ve been in the country—so much so that they seem to me reminiscent of US state troopers. Though they attribute the decrease in accidents to the SAFER Camera System (the preferred hand’s off version of traffic policing), I am pretty sure the new professional vigilance of the Jeddah traffic police are the real effective difference.

I drove a cab for five years so I know being at fault means nothing if you’re dead. Just driving defensively isn’t enough—drive like it’s a war and the other cars are the weapons driven by a suicidal enemy . To drive in Saudi and survive, you must force yourself at times to drive like the rest to avoid accidents.

One Response to A Helpful Guide On How To ‘Drive Saudi’