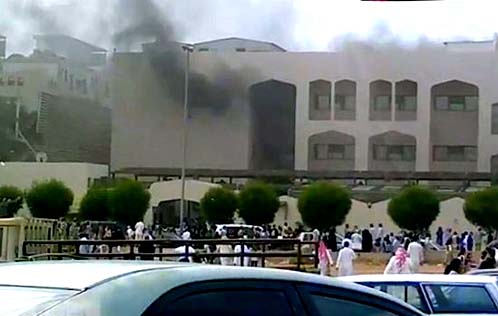 The scene was chilling to watch: Three young girls, clad in their black abayas, dropping one by one from the third-floor window shrouded in billowing black smoke as their school in Jeddah, Saudi, Arabia, went up in flames.

The fierce fire that burned Baraim Al-Watan Girls’ School in the Al-Safa District on November 19 left three teachers dead and 56 students and school personnel injured. It was reminiscent of the 2002 Makkah Intermediate School No. 31 fire that killed 15 girls after members of the Commission for Promotion of Virtue and the Prevention of Vice forced the victims back into the burning building to retrieve their abayas, the long black cloak that covers women from head to toe.

Killed in the Jeddah blaze were teachers Souzan Al-Khaledi, Reem Al-Nahari and Ghadeer Katoua. Al-Khaledi was fatally injured after jumping from a third-floor window. Al-Nahari and Katoua died from smoke inhalation. Katoua was also deputy director of the primary school. Civil Defense investigators determined that five students playing with matches started the fire in the school’s basement.

This time the commission didn’t interfere in evacuating the building, but the issue of school safety, first raised after the 2002 Makkah blaze, remains today. It also points up the significant difference between the resources allocated to boys’ and girls’ education even as the kingdom has promised to improve the status of women. Two years ago, King Abdullah opened the first co-educational university and appointed Nora bint Abdullah Al-Fayez as deputy education minister, the first women to ever hold such a post.

According to teachers employed at Saudi girls schools, little has changed in nine years.

Like the Makkah School, Baraim Al-Watan Girls’ School was in an aging rented building not designed to accommodate school students, that crowded some 750 students inside. The two schools lacked safety equipment and adequate emergency exits, and its ground-floor windows were barred, according to Civil Defense officials.

A teacher, who spoke on the condition of anonymity because she is not authorized to speak for the Ministry of Education, said there are significant differences in safety features between boys and girls schools.

“Most of the boys schools are specifically designed to be schools,” the 40-year-old teacher told The Media Line. “Boys schools are not rented, and are all equipped with big yards for sports to play football and basketball. They are surrounded by huge open areas.”

She added that classroom doors are usually left open and classes are often held outdoors.

Privacy concerns by the Ministry of Education require a different environment for female students, the teacher says.

“Girls schools are usually rented and redesigned for privacy,” the teacher said. “Though they say there is a rule against it, the windows usually have bars. The girls don’t have allocated spaces for sports, so the yards are very small. It’s like a prison.”

A defining feature of virtually all Saudi public schools for girls is the tightly controlled access to school grounds. Fathers routinely drop off their children at the front gate, but rarely enter school grounds. Mothers have greater access, but still must pass muster from the guard at the gate to enter. Many Saudi girls schools feature high walls surrounding the building with no other entries or exits other than the main gate. Likewise, female colleges and universities have strict rules that prohibit students from leaving campus without authorization.

Hannan Al-Harthy, a former student at Umm Al-Qura University in Makkah, told The Media Line that it is policy at virtually all female universities to lock students in their dormitories for the weekend unless they have permission to leave the university. Guards padlock all exits and only male guardians pre-approved by the university can retrieve the student to leave campus for a social visit.

“I never thought about the safety implications then, but in retrospect we were locked in a big box cooking food, lighting candles – basically playing with fire, if you will – without thinking of the consequences,” Al-Harthy said.

An estimated 4.6 million Saudi children attend public primary through secondary schools. About 2.2 million are girls, a jump from 33% of the student population in 1975 to about 48% in 2009. Girls schools accounted for about 48% of the Ministry of Education’s schools budget of 122 billion Saudi riyals ($32.5 billion). Although the education ministry has spent considerable money on infrastructure improvements, many girls schools still lack the larger modern campuses and more comfortable environment boys enjoy.

However, Arwah Aal Al-Asheikh, owner of Baraim Al-Watan, told the Arabic-language daily newspaper Al-Madinah that her school had up-to-date safety equipment and features, including emergency exits, fire hoses and sensors. She said the building meets the standards of an educational facility.

Yet Civil Defense fire investigators reported the emergency exits were not used to evacuate teachers and students. They said safety training appeared inadequate because the children panicked when they attempted to board a rescue helicopter hovering over the roof the building.

Taif Saeed Al-Qahtani, 12, who jumped from Baraim Al-Watan’s third-floor window, told the Saudi newspaper Al-Arabyia that she remembers nothing after her leap to safety. Her father, Saeed Al-Qahtani, said he learned from his daughter that school officials had no proper crisis-management plan in place to allow school staff to organize an “orderly and safe” evacuation of the building.

Perhaps most evident in skirting safety guidelines were bars placed on all first floor windows.

“School officials claim their facilities have all safety measures, including emergency exits, in place as specified by the Civil Defense,” Alami said.

“Our task is to review defects related to electricity, roads leading to the school buildings, emergency exits, fans, lighting and wirings. We intended to look at distribution panels, iron fences on windows, gates, gas cylinders, air conditions and refrigerators in school.”