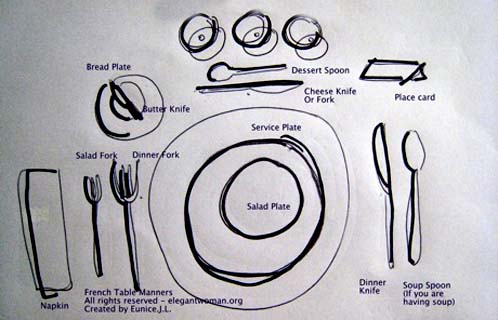 “There’s a rule in Western etiquette that goes, ‘Never discuss religion or politics’ at the dinner table. The rule was meant to apply to social engagements, not the family dinner table (which had its own rules), and was intended to avoid discomfiting guests.

Dinner tables in Saudi Arabia are coming under some strain, though, particularly in the home. I think it fair to say that Arabs, in general, are greatly interested in politics. Saudis, as Arabs, are interested. Satellite news programs are always on the TV, often multiple channels at the same time.

But politics is seen as a dangerous thing in the Kingdom, for better or worse. The system of government does not include political parties and is, generally speaking, a patriarchal monarchy, one that tells the people what they’re going to do and think. This is a more-or-less natural extension of the family structure in which the patriarch—be he father or grandfather, older brother or uncle—is the one who lays down the rules.

To argue is to disrespect. To disrespect is to threaten the social order. It’s probably wiser for expat workers to keep their political views to themselves, purely for their own personal safety. It’s a pity, though, that Saudis feel the need to watch what they say—or, more properly—who might be hearing them speak.

And the Egyptian, who thinks his 21-y/o son is too young to have political opinions? Unless he raised his son in a box, there’s no reason why that son’s opinions about Egyptian politics shouldn’t be available to argument. And if he did raise his son in a box, then there’s a far deeper problem at hand.

DIANA AL-JASSEM | ARAB NEWS JEDDAH: With the Arab Spring blossoming all around, talking politics has reached the Arab dinner table. Over are the times when families avoided discussing the affairs of state. The new generation talks about politics openly and doesn’t shy away from heated discussions.

Interviews in Saudi Arabia show that many families are divided on how to deal with the challenges facing this part of the world. One camp comprises families that are fine with discussing politics, but only in the privacy of the home. Others try to ban the younger family members from discussing the topic altogether, even going as far as monitoring the youngsters’ e-mail and Facebook accounts, or asking teachers to steer clear of political topics.

Mahmoud Farag, an Egyptian teacher working at a private school in Jeddah, said that discussing the winds of change has very much become part of Arab daily life — but he tries to keep his son from talking about revolution. “Discussing what has happened in Egypt and what is going on in Libya, Bahrain, Yemen and Syria is important, I think,” he said. “I would prefer for my son not to talk politics because he is only 21 years old, but, honestly, what do I do? After January 25, we as Egyptians got complete freedom to discuss and criticize, so my son should know what is going on — but he shouldn’t discuss it in public.” …”