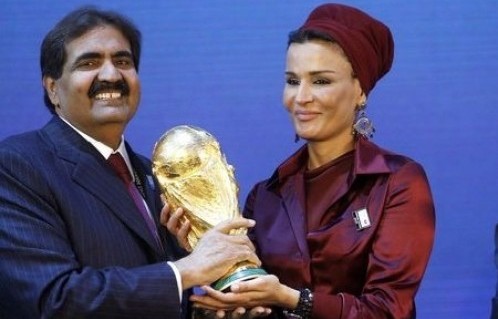 As I’ve noted before, I was taken-aback when Qatar won the rights to host the 2022 World Cup and the question of homosexuality still being illegal in Qatar was dredged up, mostly, I think, by the angry British press. In many years of studying Qatar and reading everything written on the topic, this issue had quite simply never come up. Of course, had I given it any thought I’d have concluded that Qatar, as a conservative Muslim nation, would likely ban homosexuality and that they may well have some draconian punishment on their statute books from yonks ago, but I hardly spend my days pondering the legalities of homosexuality.

This topic, then, is something of a sensitive one for Qatar. Particularly when the full glare of the world’s press stares microscopically down on Qatar whenever some event linked to 2022 rears its head. It is a simple encapsulation of the dichotomy between liberal modernity (for want of a better description) and conservative, highly religious, transitioning countries such as Qatar.

Indeed, the whole issue of liberal and conservative politics in Doha is the third rail.

For while the elite are, I feel, pulling Qatar forward in many areas, there is a distinct pull back from society too. In education, for example, in a brazen and remarkable attempt to catapult Qatar’s education system from the 1960s to the 2010s, RAND came in and jiggled things around, changing curricula, the language of instruction and all manner of things that really rather annoyed what seems to be the majority of Qataris. Similarly in Education City boys and girls share classrooms and converse in freedom, something that is frowned upon by a far from an insignificant section of society.

In health matters, Sheikha Moza pushed for the mandatory introduction of DNA tests before marriage to stop the…umm…unfortunate custom of intermarriage in Gulf societies. To this too the age old riposte of “but we didn’t have that in our day and things worked out just fine” is just impossible for many to resist.

Indeed, in many ways Sheikha Moza is at the very forefront of this battle. Her very visible presence alongside the Emir and countless events over the years is, itself, a significant statement. I’ve spoken to many young girls in Qatar that idolize the Sheikha for this; for showing them that they can aspire and achieve what they want, yet equally I’ve spoken to many (not only gents) who see the visibility of the Sheikha as, as it has always been gently put, ‘undesirable or problematic’ for a country as traditional as Qatar.

It is a matter of potential significance if and when these kinds of issues collide, especially when they may catch the lens of the international spotlight.

The student newspaper of Cornell, one of the US universities with a campus in Qatar’s Education City, is currently kicking up a righteous fuss over the Sheikha’s patronage of a clinic that, among numerous noble pursuits, also seeks to ‘treat‘ homosexuality.

In such an instance, the Sheikha is in a bind.

I have no idea whatsoever as to her views on homosexuality, but the situation is highly delicate. Standing by the clinic could incite further protest from Cornell and add to charges laid against Qatar by the international press (those paragons of justice). Distancing herself from the clinic would likely incite further ire here in Qatar.

Though this example is only a minor story currently (wait until someone is arrested for homosexuality) it is symptomatic of some of the key difficulties that Qatar is facing: the clash of the old and the new. Not that Qatar is, of course, alone in this struggle. Indeed, the Gulf is beset with countries wrestling to join the enlightened twenty-first century (do I really need to give an example of the key country in question here?) but with Qatar so single-mindedly grabbing the full-beam attention of the world with their 2022 gambit, the pressure on them is greatest. And I repeat what I said on the day that they won the prize: they don’t have a clue what they’ve let themselves in for.