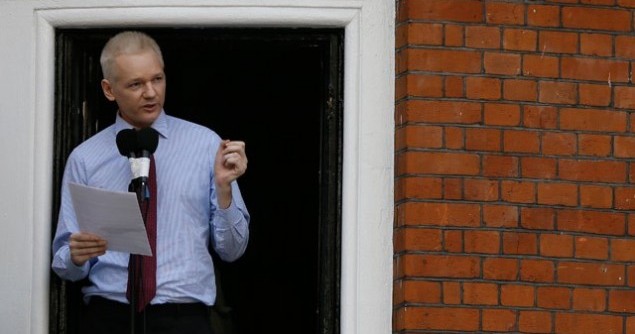 Julian Assange, the man who had held the leash of the barking dog that ripped down the wizard’s curtain which shielded western international diplomatic duplicity, has lost his high court appeal against extradition to Sweden to face rape allegations. His attempt to seek asylum at the Ecuador Embassy in London may be for naught now that the Brits have apparently ‘gangster-ed up’ like school yard bullies, sticking by their cohorts in enforcing the rule of the thug for the sake of intimidating the smaller, weaker countries.

What seems more surprising to me is the lack of real outrage from the global media  (particularly after having participated and benefited from his journalistic pursuits) —as if the significance of Assange’s fate and how he is being treated is not inexplicably tied to their future role as a trusted information source and a safeguard from corruption for the people that they claim to serve.

Instead of  the so called ‘free world’ giving  Assange a big Nobel ‘thank you’ (if not a Pulitzer from his peers) for his part in inspiring the Arab Spring (and perhaps, indirectly, the first signs of the ‘American Spring’ in the Occupied Movement), the first unstaged pro-democracy movements in the modern era– not to mention breaking the biggest story of the century, the world press and ‘freedom loving’ governments (the UN) have simply acquiesced as if taking a ‘wait and see’ posture in the wake of  UK Government threats to violate Ecuadorian sovereignty by storming the South American embassy in an attempt to  gift wrap the beleaguered journalist for their Yankee posse– interpreted by some as a last bid effort to silence the Australian canary. Once out of UK or Ecuadorian jurisdiction (depending how you want to look at it), it is universally thought that Assange would face Swedish extradition to the US where he might  possibly receive the death penalty under the generous legal latitude of the Patriot Act; in what could be, in the long and short of it, an old fashion lynching.

All this ‘to do’  does certainly appear to be sending a clear warning to the world press that further exposure of the nefarious dealings and convert schemes of the imperial specter would meet with the harshest reprisals– making any future tattling as unmentionable as Aunt Bernice’s mustache at a Thanksgiving dinner table.  The message to the press:  the right for people to know; the right of the press is what we say, not what you print.

“The documents, released daily, in partnership with a host of international media organisations, present unparalleled insights into the secret world of diplomatic exchange and has left diplomats around the world scrambling to deal with embarrassing consequences. The latest approach (of Wiki Leaks) — a painfully slow leak of classified information — captured the imagination of the world, seeing us all indulge in diplomatic gossip, blunt opinions and exchanges from those in the upper echelons of statehood, in addition to the underhanded dealings of world governments.”

Most assuredly, Assange’s legacy will more than likely only be realized by historians of later generations who will be better able to fully measure its impact on our world.

The Consequences of Killing the Messenger

Assange’s departure as a contributor to the global information stream, in all probability, could have the opposite effect his detractors envision in that it is too much too late. What those who are orchestrating Assange’s kangaroo hop in the western courts may have failed to realize is that his journalistic prowess is the least of their troubles. The damage is already done. Sending out the imperial guard to shoot the messenger doesn’t connote thoughts in the hearts and minds that justice is afoot and everything is right with the world.

What may really get under everyone’s skin is the draconian and blatantly criminal efforts to silence him (and others) without a hint of an apology, the pretense of  justifying the high crimes the leaked cables and documents have exposed or any measures to exact any accountability in their regard. I believe the way Assange’s enemies would like the public to perceive him, when the dust settles, is as a notorious man of questionable morals, disgraced by a reckless media he sought to empower and defend.

What is more likely to happen is that the destruction of Julian Assange (or the publicized attempt thereof) will merely galvanize the feeling among the western intellectual establishment that the Orwellian prophesy of ‘big brother’, once thought to be the result of a Communist state,  appears to correlate more with what Marx said about democracy controlled by unbridled capitalist big shots. University of Michigan Professor Julian Cole in his recent post U.S. Democracy: The Billionaire’s Club ((Mother Jones and the Mideast Posts) in which he explains the overwhelming extent the less than one percent of the population in the US controls what goes on in the government attest to the reality of this perception.

What could also happen is the Assange affair may be the first domino in a series of caustic circumstances that are bound, in their cumulative consequence, to ignite a tumultuous movement of events and thinking necessary for western economic and governmental reform. Prosecuting (and persecuting) Assange for defending democracy may finally furnish proof to many that present day western democracy, and its purported inalienable freedoms, as a mechanism for governance, is not what it was advertised to be.

His martyrdom, figuratively or otherwise, may signal a tipping point; a crucial deal breaker for those who think they hold all the cards and have covered all their bets. Let us not forget that the recently toppled western-backed dictatorships in the Arab world also thought they had absolute control (such is the definition of dictatorship).  After all, weren’t the Arabian  Springs clearly in response to the exposure of a betrayal of leadership rather than some massive; spontaneous whim to have better government?

The prosecution of Julian Assange in America, or any western proponent of the US democratic idea, may end up as an indictment and condemnation of the great American experiment regardless the verdict.

As an eternal optimist, I still believe it is entirely possible that America may redeem itself once again in yet another historical 11th hour turn about in the dramatic saga of its rise and decline– by remembering, and then acting on, its famed pledge to support “liberty and justice for all.”

I can only hope for the best; but brace myself for the worst.