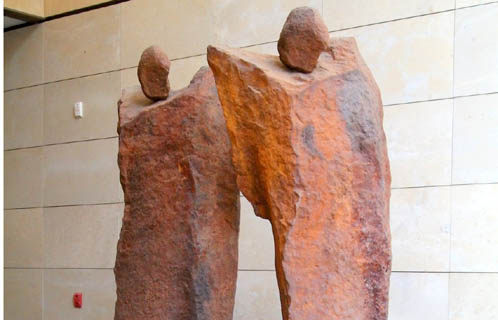 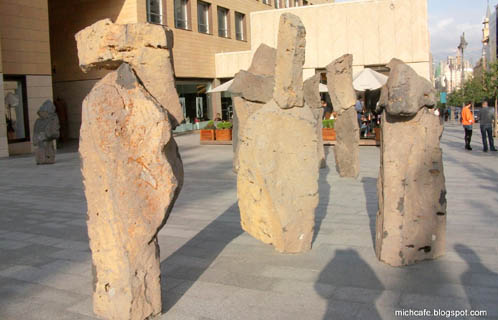 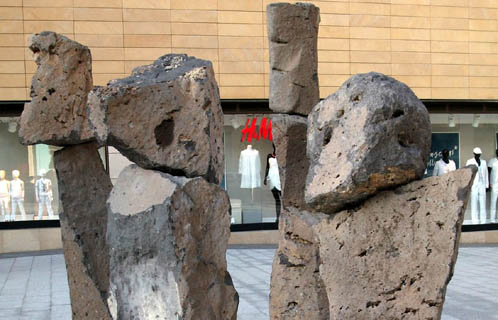 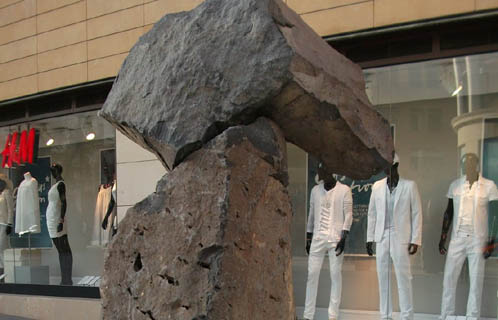 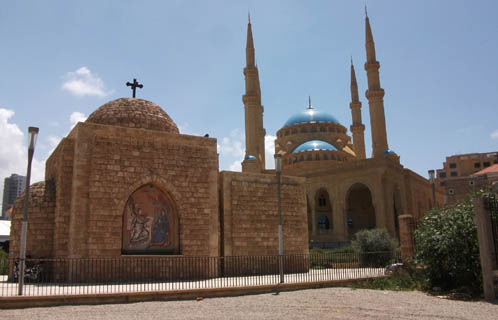 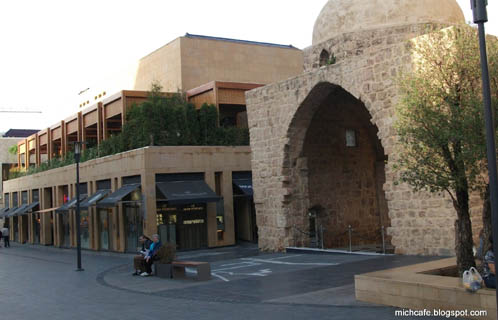 Whenever I’m in Beirut, I go visit the sculptures peppering the entrance to the Souks. It’s always interesting to hear people’s comments as most think they are a waste of money and “just stones.” They either love them or hate them, a bit like Marmite.

I love these huge figures. They make you stop, think, discuss… And the idea of public works of art — accessible, in the open for all to see and appreciate (or disparage) – is brilliant.

They are 15 exceptional sculptures by Catalan painter, sculptor and architect Xavier Corbero that change character depending on the light and angle you look at them. Some seem to be just strolling about, others talking or embracing. But you can see them yourselves in the snapshots.

Dotted around Downtown Beirut in a sort of open museum, Corbero’s sculptures are made of basalt extracted from a particular quarry in the suburbs of Barcelona. Inspired by nature, it took him three years to complete them.

Downtown Beirut was planned and redeveloped by Solidere, founded in 1994 by the late Prime Minister Rafik Hariri, at the end of the Lebanon civil war. Solidere is the acronym in French for Lebanese Company for the Development and Reconstruction of Beirut.Information about the sculptures is sparse and about their creator mostly in Spanish, so it was interesting research.

I don’t know much about art, but I have always been drawn to public displays and grandiose patterns like those by Henry Moore and Pablo Picasso. Maybe that’s why I’m attracted to Corbero’s figuresCorbero is Spain’s finest living sculptor. He was influenced in his early years by Spanish sculptor and painter Pablo Gargallo and Moore, the British sculptor and voice of British modernism.

From my first meeting with Corbero’s carved figures, I was hit by the massive bulk of the basalt, one of the most common fine-grained volcanic rock types in the world. The ocean floor is almost entirely made up of basalt, and maybe that’s what gives the stone a slippery feeling.

Perhaps it’s the way the figures are positioned, in relation to the space and to one another that is as important as their bulk and mass… Who knows in art?

The sculptor settled in Spain’s remote Esplugues region in the late 1950s and since then has built a dream environment and refuge where artists live and work. Painters and sculptors are offered a free room and studio to explore their creativity at the Fundacion Xavier Corbero.

Salvador Dali was Corbero’s first patron although he didn’t know it — a tale I found repeated often while looking up the artist about their relationship. Corbero says: “I didn’t know he was my patron until many years later. Somebody had called on the phone and said ‘Hello, this is Dali.’ I thought it was a friend pulling my leg, so I said, ‘Yes, and I am the bishop,’ and hung up.”

Many years later, during an exhibition in New York, Dali visited the gallery every day. Corbero asked him why, and the great painter replied: “Because I find your work very interesting. The only problem is that you aren’t very polite given that I bought everything at your exhibition.”

Corbero’s roots are in Spain’s Catalan region, specifically Barcelona, a city famous for its public displays of art. Ahead of the 1992 Barcelona Summer Olympics, he organized for artists to create public art projects in the city and many of his own massive works line major boulevards. He also created the 1998 Olympic medals and convinced the Olympic committee to use real gold in them for the first time in the history of the GamesAfter saluting my 15 friends, I continued my tour of Downtown Beirut, admiring the blend of old and new in the Souks’ restored streets and alleys as well as in the churches and mosques, often sitting side-by-side.

And I headed towards the new and upcoming district at the Port of Beirut, off the waterfront, which is developing into a new shopping area. There too, the mix of old houses and buildings contrasts with the designer boutiques.

So far there are three that launched in December – Maison Rabih Kayrouz, which I didn’t dare enter but whose windows were decked out with beautiful green, red, yellow and blue dresses and evening gowns; the Karen Chekerdjian Store for creative houseware; and a new branch of the famous and iconic IF BoutiqueBut there is that much you can walk and it was time to retrace my steps, past the Al-Amin Mosque and the picturesque Saydet al-Nourieh Church (Our Lady of Light), and take a shared cab, or servees, back home to Hamra.