Dubai Gets its Blue Mosque

I heard ‘Uthman bin ‘Affan saying, when people argued too much about his intention to reconstruct the mosque of Allah’s Apostle, “You have talked too much. I heard the Prophet saying, ‘Whoever built a mosque, Allah would build for him a similar place in Paradise’.” 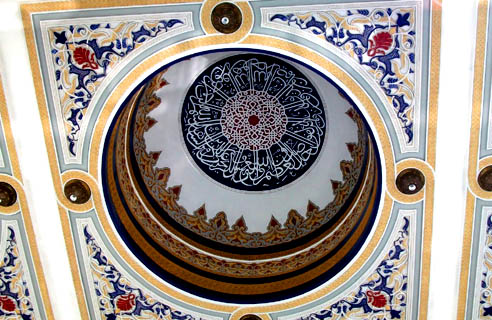 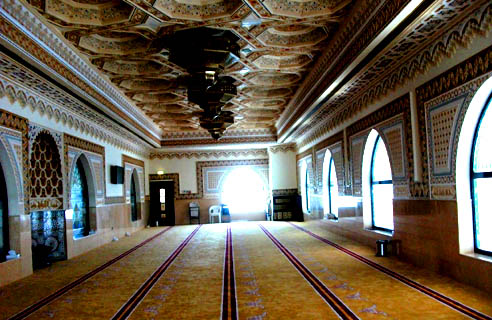 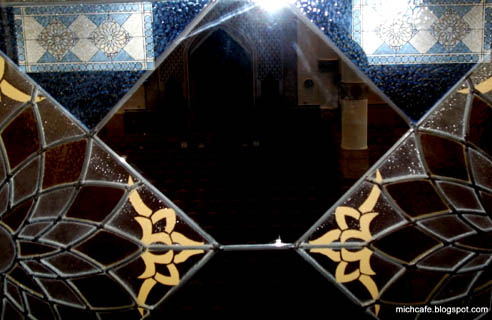 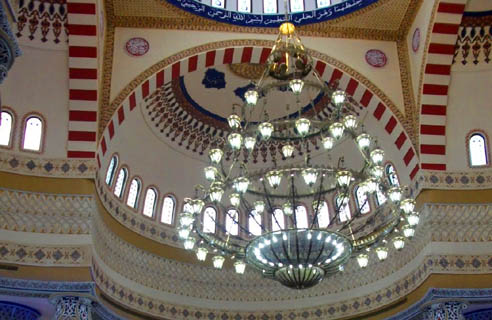 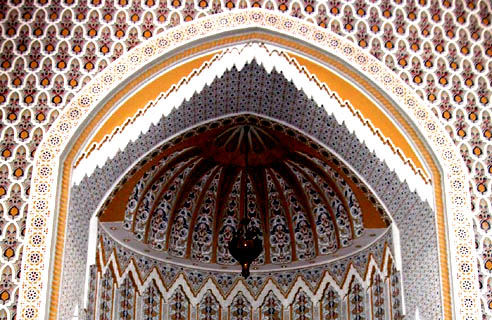 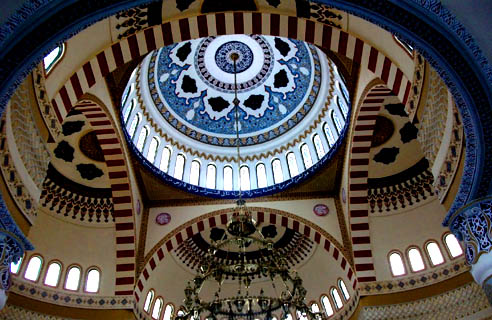 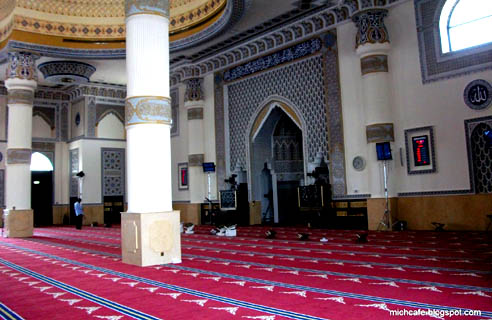 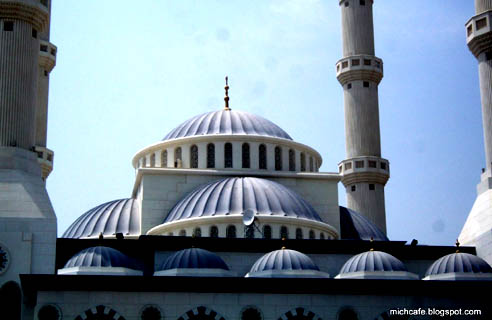 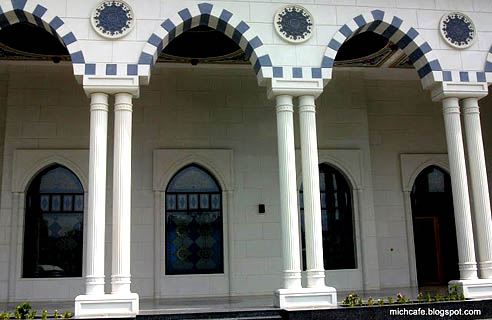 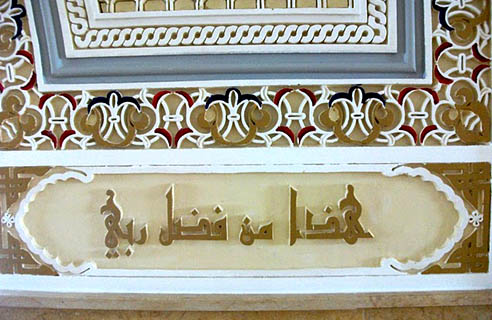 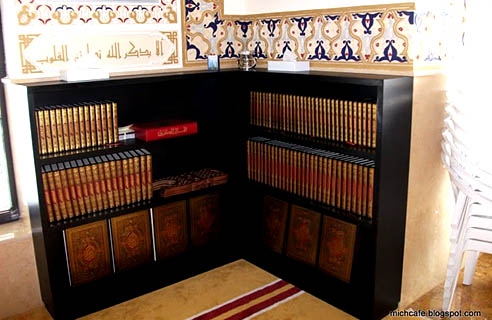 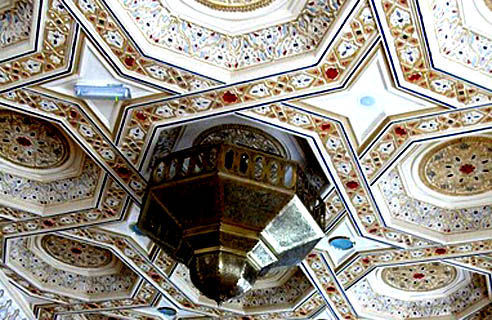 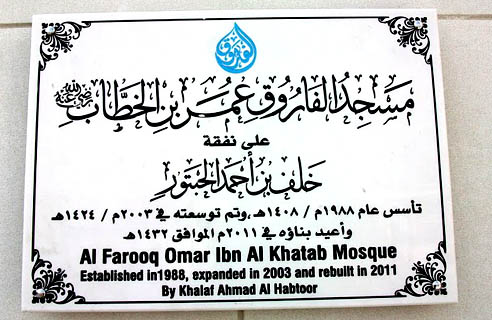 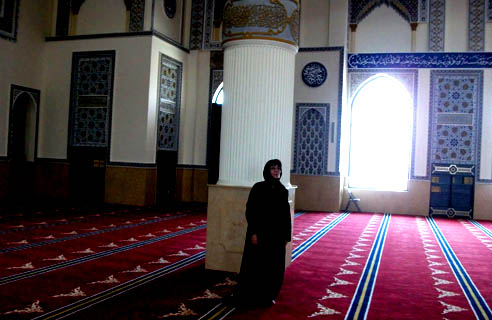 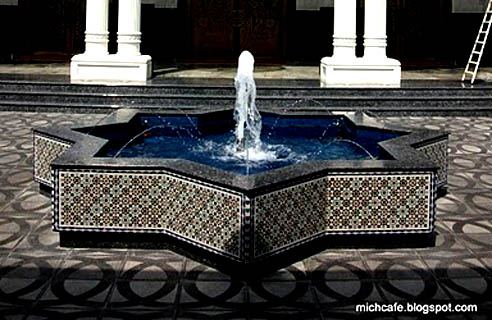 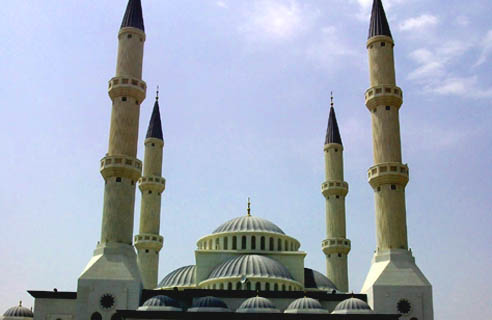 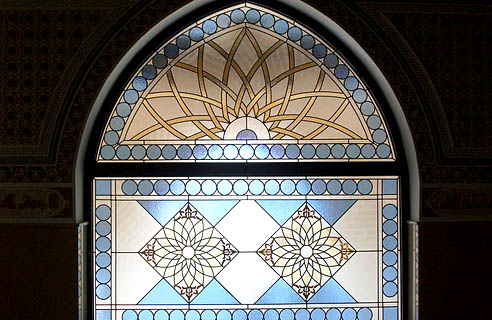 I watched the four pencil-shaped columns rise over the past year. From far they looked like spaceships ready to blast off. Last week I found out they were the minarets of a new mosque, built and offered to the city of Dubai by business leader Khalaf Ahmad Al Habtoor.

I had to go and see what lay beneath the four minarets, which I did on Saturday morning (August 6). It’s easy to get there — the minarets (from the Arabic manara or lighthouse) guide you. The new mosque in Al Safa 1, is just off Al Wasl Road and sits between Spinneys and Park’n’Shop.

The closer you get, the more splendid the mosque looks. The size is breathtaking and I had difficulty getting the four 60-meter-high minarets in one photo frame. The many domes are of different sizes, and the stained glass windows sparkle in the morning sun. The architecture is inspired by, and similar to, Istanbul’s Sultan Ahmad Mosque or “Blue Mosque,” and it is said to have cost AED 85 million (or $23 million).

Al Farooq Mosque, which can hold at least 2,000 worshipers, is one of the most modern in the region. It is the largest in Dubai and the third to open its doors to non Muslims after the Sheikh Zayed Bin Sultan Al Nahyan Mosque in Abu Dhabi and the Jumeirah Grand Mosque in Dubai.

I went mid morning, so as not to interfere with prayer times, especially during the Holy Month of Ramadan. I had the run of the mosque compound thanks to Shehab, a helpful security guard from Bangladesh, who shadowed me on my tour and lent me an abaya to don inside the mosque.

I have always valued the sensation in prayer houses. And the call to prayer is one of the sounds from the region I missed most when living in London. Somehow there is no rhythm to the day without the five calls to prayer.

While growing up in Tunis, my mom Vicky and I used to walk to the closest mosque to home in La Marsa, a suburb of the capital, to hear the maghrib (evening) prayers. We’d sit on one of the benches in the square in front of La Marsa Mosque and follow the adhan.

At the time, the muezzin’s call to prayer was live from the minaret, which along with the dome is a characteristic form of Islamic architecture. But with the mushrooming of cities, the muezzin now calls the adhan from the prayer hall by means of microphones fixed to the minarets.

The mosque is named after one of the companions of the Prophet Mohammad (PBUH), who was widely recognized for his justice and fairness. Omar, the second Caliph after the Prophet’s death, succeeded Abu Bakr in 634. Also known for his legislative competence and firm political and administrative leadership, the Islamic empire expanded greatly under his caliphate.

The mosque itself is split into the main prayer hall for men and one for women on the first floor (with elevator). Four smaller ones surround the central dome while mini-domes crown the exterior walls.

I went up to the women prayer hall first. It is a long room overseeing the main prayer hall. The walls, windows and ceilings are all beautifully carved, with blue dominating the colors throughout. There are engravings of verses from the Qur’an all along the walls and bookshelves on both sides stacked with copies of the Holy Book. It seemed quite high for a first floor and you look down on the main hall from behind the stained glass panels.

The Islamic Center consists of a library for research and reading and a lecture hall or classroom boasting state-of-the-art equipment. It will offer courses to study the Qur’an. The complex houses the Imam’s, the muezzin’s and the ablution facilities. I didn’t go into these buildings because some were closed due to the hour of day and others are still being completed.

The domes in the main worship area are decorated with Qur’anic verses and Islamic designs and calligraphy created by a team of 60 Moroccan artists and craftsmen brought to Dubai from Fez by Al Habtoor Group. The stained glass windows are chiefly blue throughout.

The thick, new carpets were specially made in Germany; a new method of air-conditioning was adopted; and bronze chandeliers hanging from the mosque’s ceiling, rising to about 30 meters, add beauty and awe to the atmosphere.

Built by Ahmed I between 1609 and 1616, Istanbul’s Blue Mosque was controversial when it was revealed it would have six minarets, the same number as the Al-Haram Mosque housing the Ka’aba in Mecca. To overcome the problem Ahmed I sent his architects to build a seventh minaret at the Mecca mosque.

The mihrab, the semicircular niche in the wall of the mosque to indicate the qibla, or direction of the Ka’aba in Mecca that Muslims should face when praying, is adorned with marble and mosaics.

The Al Habtoor Group Facebook page says Khalaf Al Habtoor and his family took up the challenge to transform what was a small mosque into such a complex a few years ago. The center is open to non Muslim visitors as a way to promote cultural interaction and communication. Al Farooq Omar Ibn Al Khattab Mosque was established in 1988, expanded in 2003 before being rebuilt at the beginning of this year. It was designed by Mohammed Al Shaikh Moubarak Architects and built by Teem Construction.

It is unusual to see four minarets, like at Al Farooq Mosque. The majestic Sheikh Zayed Mosque has four and the Jumeirah Grand Mosque has two. Most other mosques have one or two.

Minarets have been described as stairways to heaven. They also remind of the first letter of the Arabic alphabet, alif – a straight vertical line. The basic form of a minaret includes a base, shaft, and gallery. Styles vary regionally and by period. The minarets at Al Farooq Mosque have two shafts and the pointed gallery is of course blue.

Mosques were first built without minarets. According to hadiths (narrations of sayings of the Prophet) the community of Madina gave the call to prayer from the roof of the Prophet’s house, which doubled as a prayer place. Around 80 years after the Prophet’s death, the first known minarets appeared.

The oldest standing minaret is that of the Great Mosque of Kairouan in Tunisia, which I visited many years ago. Built between the 8th and the 9th century, it is a massive square tower consisting of three superimposed tiers of gradual size and décor.

I walked around Dubai’s Blue Al Farooq Mosque for more than an hour, and kept discovering inscriptions, patterns, designs, mosaics and other little wonders. As it starts to write its own history, I like to think that in the centuries to come, in the entries about the Al Farooq Mosque, I played a minuscule role in treading its new carpets.

Until you get a chance to visit Al Farooq Omar Ibn Al Khattab Mosque and Islamic Center, I leave you with some snapshots.

One Response to Dubai Gets its Blue Mosque