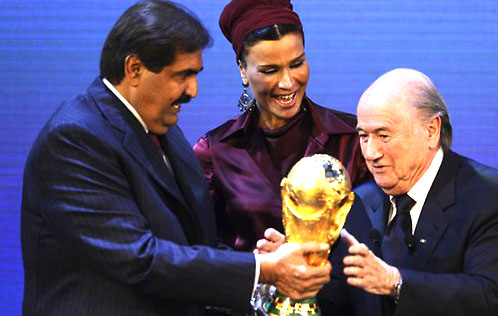 In a worrying development for Qatar, world soccer body FIFA president Sepp Blatter has for the first time opened the door to a possible investigation of the Gulf state’s successful but controversial bid to host the 2022 World Cup.

In a series of interviews with media including Fox Soccer and Germany’s Frankfurter Algemeine Zeitung, Mr. Blatter said the soccer body’s newly created Good Governance Committee would have the authority to review the bid process that resulted last December in the awarding of the 2018 World Cup to Russia and the 2022 tournament to Qatar.

Qatar’s bid has been mired in controversy prompted by questions about its well-funded bid campaign as well as potential problems because of its searing summer temperature, sour grapes on the part of its competitors and allegations made by a disgruntled employee of its bid committee.

The banning in July by FIFA of Asian Football Confederation president Mohammed Bin Hammam, Qatari national, on charges of bribery in his failed FIFA presidential campaign cast a further shadow over the Gulf state’s bid campaign. The banning of Mr. Bin Hammam, who denies all wrongdoing and is appealing the ban, is part of the worst corruption scandal in FIFA’s 107-year history.

Reports that French President Nicolas Sarkozy engineered UEFA head Michel Platini’s vote in favour of the Qatari bid at a meeting in November of last year with Qatari Crown Prince Tamim Bin Hamad al-Thani in which he also persuaded that Qatari to acquire financially trouble team Paris Saint-Germain have also revived questions about the Gulf state’s hosting of the World Cup. Qatar had in 2006 walked away from a possible acquisition the underachieving club that was haemorrhaging money and was renowned for its hooligan element.

French magazine So Foot reported that Mr. Platini, a former French national soccer team captain, had been dead set against Qatar’s 2022 World Cup bid before being urged to change his mind at the meeting with Mr. Sarkozy. “He told me the Qataris were good people,” So Foot quotes Mr. Platini as saying.

The initial discrediting of the allegations against Qatar failed to stop the British parliament’s media and culture committee from demanding an investigation of the awarding of the 2022 tournament to Qatar. German soccer federation boss Theo Zwanziger has also repeatedly demanded an investigation.

In an article in The Huffington Post, Damien Collins, a member of the parliamentary committee noted that “six months ago, Sepp Blatter promised reform at FIFA, yet in reality little has changed. There has yet to be a truly independent investigation into allegations of corruption made against FIFA executives during the bidding process to host the 2018 and 2022 World Cups. In the last year, 11 of the 24 leading members of FIFA, who make up its executive committee, have faced serious allegations of corruption.”

Mr. Blatter told Fox Soccer when asked if there is a process in place to rescind a World Cup bid that “if somewhere, something appears … this committee has to have a look [at] that and report it. And then we will see what will happen.”

Mr. Blatter went on to say that asking how the World Cups had been awarded “is not only a difficult question, it’s a good question.”

FIFA announced last week that the Good Governance Committee would be headed by Dr. Mark Pieth, a Basel professor serving as part of a United Nation’s team investigating alleged corruption in the Iraqi oil-for-food aid program.

Under FIFA rules, the world body’s ethics committee would adjudicate charges stemming from irregularities uncovered by the Good Governance Committee.

Speaking in London last month, Hassan al Thawadi, the Qatar bid committee’s secretary general said that the ”perception (of corruption) will always be a sense of frustration until we overcome how people view us.”

Mr. Al Thawadi insisted that the bid was conducted to the ”highest ethical and moral standards” and portrayed Qatar as the victim of a campaign in which ”baseless accusations were made against our bid. We were presumed guilty before innocent without a shred of evidence being provided.”

He said that “amid all the celebrations and joy, we knew that the work was only just beginning. What we did not know or expect was the avalanche of accusations and allegations that we would face in the immediate aftermath of what was a historic day for sport in our country and for the wider region.”

That avalanche could gain substantial momentum with Mr. Blatter shifting his position away from absolute rejection of any investigation into the Qatar bid.

At the same time, any investigation will also have to include a review of FIFA’s bid rules in an effort to tighten the process and eliminate the ability of bidders to influence the vote by for example funding soccer infrastructure in the home countries of members of the soccer body’s executive committee.