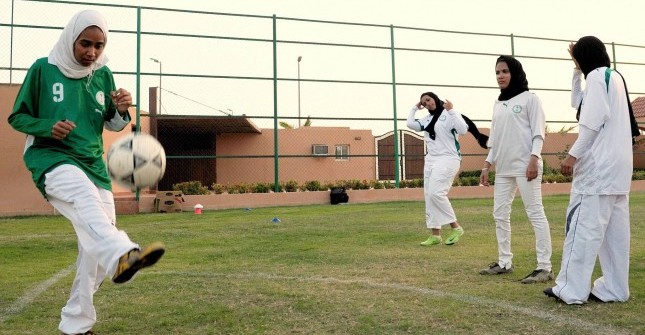 Saudi Arabia, under domestic and international pressure to grant women sporting rights, is creating separate stadium sections so that female spectators and journalists can attend soccer matches in a country that has no public physical education or sporting facilities for women.

The move announced by the recently elected head of the Saudi Football Federation, Ahmed Eid Alharbi, a storied player believed to be a reformer, also comes as soccer is emerging as a focal point of dissent in the conservative kingdom.

Saudi Arabia has been slow in granting limited enhancement of women’s rights in response to demands by activists. Women in Saudi Arabia are banned from driving, travelling without authorization from a male relative and banned from working in a host of professions. Saudi Arabia’s religious police said last month that women would be allowed to ride bikes and motorbikes in recreational areas provided that they were properly dressed and accompanied by a male relative.

Saudi Arabia recently also announced that it would allow girl’s physical education in private schools as long as they do so in line with Islamic law. Yet, a five-year national sports plan, the kingdom’s first, currently being drafted does not make provisions for women’s sports. Saudi sources say the government is also for the first time considering licensing women’s soccer clubs.

Saudi Arabia last year sent under pressure from the International Olympic Committee women athletes, albeit expatriate ones, to the 2012 London Olympics, the first time Saudi women competed in an international tournament. The kingdom is also under pressure from the West Asian Football Federation, which earlier this year, issued guidelines to ensure that women have equal rights and opportunities in soccer.

Speaking at King Abdulaziz University in Jeddah, according to Saudi press reports, Mr. Alharbi hinted at the economic impact of allowing women to attend matches by saying that the creation of facilities for them would increase capacity at various stadiums by 15 percent. He said the Prince Abdullah Al-Faisal Stadium in Jeddah would be the first to accommodate up to 32,000 women followed by the King Abdullah City stadium in the capital in 2014. Saudi Arabia, which enforces strict gender segregation, first announced in 2012 plans to upgrade the Jeddah stadium to enable women to enter.

Meanwhile, in the latest politically-loaded soccer incident, Al Ittihad SC of Jeddah, filed a complaint against Riyadh’s Al Hilal SC after an Al Ittihad official and fans tweeted and chanted racist remarks. Al Ittihad, which has a number of dark-skinned Saudi players, and Al Hilal are among Saudi Arabia’s top clubs.

“The last match between Al-Hilal and Al-Ittihad clearly revealed the indecency of Al-Ittihad players through two movements – one from ‘the monkey’ Fahd Al-Muwallad who did not stop proceeding when Muhammad Al-Qarni was injured in a jostle with him. Secondly, (they) did not fulfill the commitment to Majed Al-Murshidi, and did not greet or thank him,” Saud Al-Sahli, assistant director of public relations and announcer at King Fahd International Stadium in Riyadh, said on Twitter. Al Hilal fans chanted Some Al-Hilal fans had shouted “Nigger, Nigger” during the match earlier this month. Messrs. Al-Muwallad and Al-Qarni are both dark-skinned.

Saudi newspapers warned that racist incidents threaten to rekindle religious sectarianism, tribalism, and regionalism in the kingdom, in part a reference to Shiite Muslim protests in the oil-rich Eastern Province.

“The racist and sectarian utterances of sports fans should not be punished by fines alone, as some heads of the sports clubs are immensely rich and can pay the fines against their fans without feeling any burden. There should be harsher punishments, including a ban on the fans from entering the stadiums, reducing the club’s league points or even downgrading it to a lower division,” the Saudi Gazette said in an editorial.

Members of the royal family with positions in Saudi soccer or who own clubs have been repeatedly in the past year in the firing line of disgruntled fans. A Facebook page entitled Nasrawi Revolution demands the resignation of Prince Faisal bin Turki, the owner of storied Riyadh club Al Nasser FC and a burly nephew of King Abdullah who sports a mustache and chin hair. A You Tube video captured Prince Faisal seemingly being pelted and chanted against as he rushed off the soccer pitch after rudely shoving a security official aside.

The campaign against Prince Faisal follows last year’s unprecedented resignation of Prince Nawaf bin Feisal as head of the Saudi Football Federation (SFF), the first royal to be persuaded by public pressure step down in a region where monarchial control of the sport is seen as politically important.

Prince Nawaf’s resignation led to the election of Mr. Alharbi, a commoner, in a country that views free and fair polling as a Western concept that is inappropriate for the kingdom. Prince Nawaf retained his position as head of the Saudi Olympic Committee and the senior official responsible for youth welfare that effectively controls the SFF.

Nevertheless, the resignation of Prince Nawaf and the campaign against Prince Faisal gains added significance in a nation in which the results of premier league clubs associated with various members of the kingdom’s secretive royal family are seen as a barometer of their relative status, particularly at a time that its septuagenarian and octogenarian leaders prepare for a gradual generational transition.

Said a Saudi journalist, summing up the mood among fans and many other Saudis: “Everything is upside down. Revolution is possible. There is change, but it is slow. It has to be fast. Nobody knows what will happen.”