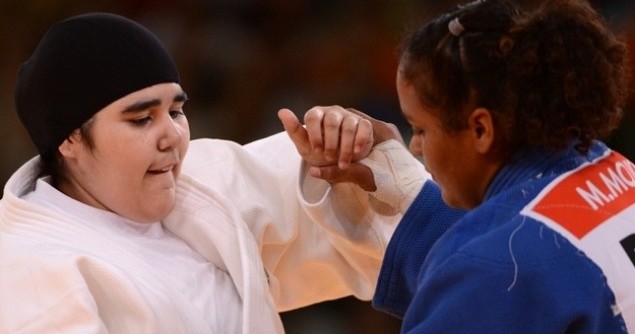 After Wojdan Shaherkhani had her bout in the Olympics, media had to delve into the question of what did it all mean. The New York Times was unimpressed. The article it ran, by Alessandra Stanley, claims that Saudis were unimpressed…

Winning was never the point. No one expected Wojdan Shaherkani, 16, the first female Saudi Olympian to compete, to pin her opponent. The idea was to flip sexist attitudes in Saudi Arabia that prevent women from, among many other things, exercising in school and competing in organized sports.

Shaherkani’s judo match was over in 82 seconds Friday. In Saudi Arabia, the repercussions of her historic feat could last even less.

Conservative clerics remain — no surprise — unmoved. But even some feminists here are questioning the Olympic experiment. Some see the move as a groundbreaking precedent; others worry it is a cynical public-relations salve that won’t change hearts, minds or gym regulations.
…

The Washington Post, running a piece from the Associated Press, was a bit more equivocal…

CAIRO — There was no way Alaa al-Mizyen, a 22-year-old Saudi investment consultant, was missing this Olympic match. While her family slept in late Friday morning, she alone was awake and glued to the TV.

It was, after all, her first ever opportunity to cheer a Saudi woman in the world’s biggest sporting event.

The participation of Saudi judo player Wojdan Ali Seraj Abdulrahim Shahrkhani had raised the scorn of the kingdom’s ultraconservative Islamic clerics, who said she was dishonoring herself by fighting in front of men, including the male referee and judges. And the match Friday was a swift defeat for Shahrkhani: The teenager was thrown by her Puerto Rican opponent in just over a minute.

But for her supporters, it was an enduring, landmark victory.
…

Saudi media, too, was a bit mixed. Arab News ran a photo and one paragraph simply noting that she had competed and lost her bout. Saudi Gazette, on the other hand, was rather more positive about it. The article notes that those who don’t approve of women taking part in sports weren’t happy; those who do, were.

JEDDAH — It was over in 82 seconds, but those seconds made history for all women in Saudi Arabia.

Wojdan Shahrkhani made headlines Friday as she walked into the sprawling ExCel Center in London to compete against Puerto Rico’s Melissa Mojica, a well-built US-trained judoka who is ranked 24th in the world.

Despite her loss, Shahrkhani — who has only a blue belt — perhaps doesn’t realize that she made history and became an inspiration for Saudi women, who now, have hope for change in a country where fitness centers are not permitted to open unless under a hospital supervision and permit. “I’m really happy to be at the Olympics and proud to represent the Kingdom of Saudi Arabia and thank all those who stood by me,” Shahrkhani told Reuters.

“I was afraid when I came out into the arena but I was happy when I heard the cheering,” she said.

However, many members of society considered her participation and that of Sara Attar an affront to the country’s traditions with one Twitter user creating a hashtag that questioned the girls’ morals and another hashtag Friday under Wojdan Shahrkhani’s name criticizing her performance and making racist comments.
…

I do think that even the minimal participation by Saudi women – and Sarah Attar has yet to take to her starting block – has changed the game in Saudi Arabia. It will be all but impossible to deny Saudi women a place in future games, not only Olympic, but other international competitions as well.

By demonstrating that they can compete without losing their virtue, they cut the legs out from under arguments about the essential immorality of women and sports. By showing that women are competent to compete, they provide a model for the coming generations of Saudi women. Even by losing, Wojdan Shaherkhani has won a major victory, not signaled by a medal, but in the hearts of millions of Saudi girls and women who can point to her and say, “Me, too!”