The Women Changing Lebanon Through Football 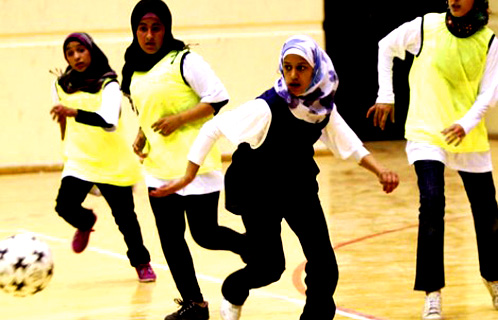 Lebanese women are fighting a silent revolution on the football field through the popular club programme of the Cross Cultures Project Association (CCPA) in Lebanon, which provides educational activities for those in post-conflict countries.

Farah and Mirna are two young women on an important mission: they want to change Lebanese society by promoting gender equality and giving young girls the opportunities they didn’t have themselves.

“We are here at the CCPA seminar because we want to change something,” says 28-year-old Mirna. Together with her friend Farah, Mirna is taking part in a seminar in Beirut for volunteers in the CCPA Popular Club programme. The two school teachers want to establish their own sports club for girls in their hometown. “There is nothing like this in our town. All sports clubs are for boys and men, but we want to make a club for girls – and only girls!” says Farah, who has been living in a little town in South Lebanon her entire life and is fed up with how her society views and treats girls and women. “We have had no opportunities for sports or physical activities. It has been very frustrating,” she says.

CCPA Lebanon is focusing on bringing together a mixed group of children who play in the same club regardless of gender, talent, social standing, religious and ethnic distinctions. The CCPA popular club project is working to support the development of an active civil society based on diversity and equality, where females are encouraged to take an active part in order to promote gender equality and non-discrimination.

The idea of popular clubs for girls is revolutionary – especially in the south. The two women’s hometown is located in a conservative area around the city of Tyre, where cultural mores have made it difficult for CCPA Lebanon to organise sports activities for girls and women. The local CCPA coordinator Adel Saad has experienced how complicated it is to attract females to sports activities, not only in the south but all over the country: “This is Lebanon, and it is unusual for girls to participate in sports outside school. We need to change this, but it should be done slowly,” says Adel.

“There is an idea here that girls who wear the hijab (headscarf) don’t play sports,” Mirna adds. “Men think that we are not interested and don’t like being active, but this is so wrong. We know many, many women who are like us.” Adds Farah, “I want to change the impression that girls who wear hijab can’t do anything except sit at home and be quiet. By playing sports we can change this and express ourselves!”

Involving women in sports is only a small step for better conditions and equality for women in Lebanon, but it is a clever way to start changing society. In this very volatile country everything tends to be politicised, but sports are seen as far removed from politics and therefore safe. Mirna and Farah chose to take active part in society through CCPA Lebanon because of the reputation of the organisation in the area.

Many people in Lebanon are not ready to deal with strong and independent women doing sports. Even these two women had to struggle before going to the CCPA seminar in Beirut, far away from their hometown. “Our families were against it,” Farah says. “Staying at a hotel with 50 men is not a good thing to do for young decent women. We couldn’t convince our families to allow us to go, so in the end we just said, ‘Enough. We will go whether you like it or not.’”

Farah and Mirna have learned a lot at the seminar, but it is not only the women who have something to learn. According to Farah, male instructors and trainers also have many things to learn: “Some of the men here are not used to have women around them. But they have to learn this: women are also allowed on the playing field and to take part in society.”

The small liberation movement for Farah, Mirna and their Lebanese sisters has started. There is still a long way to go, but Farah is optimistic and motivated. “We will need time. Things don’t change overnight here, but we know that we can do it. We know that we can change how other people are seeing women. We can’t lose faith – and we can’t fail! But we need patience.”

Juul Petersen is Programme Coordinator at CCPA. This article is posted on the 1001 Stories of Common Ground website and was a finalist in the Positive Change in Action competition