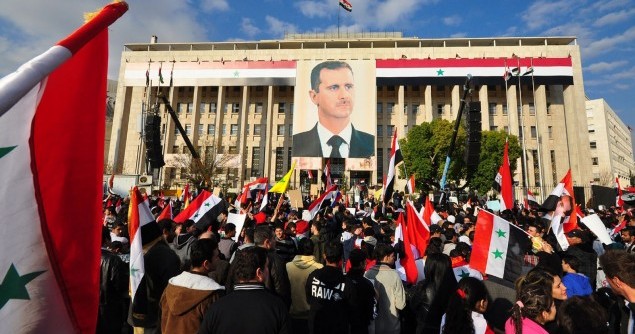 Supporters of Syrian president Bashar al-Assad portrayed this weekend’s winning of the West Asian soccer championship by defeating Iraq as a unifying, national achievement against all odds. Yet, Syria’s success 22 months into an increasingly brutal civil war hardly constitutes the equivalent of Iraq’s winning of the Asian Cup in 2007 at the peak of that country’s sectarian violence. The Syrian national team, unlike its Iraqi counterpart five years ago, is moreover incapable of offering Syrians any hope of an end to the bloodshed and greater unity.

“I give this win and this worthy title to the Syrian people. I thank God that we succeeded in bringing happiness to the sad people,” said Syrian striker Omar Al Soma in a televised interview after the match.

Opponents of Mr. Assad sought to diminish the symbolism of the Syrian victory. “The team’s victory has nothing to do either with the president or with the rebels,” said satiric Facebook page Shu Ismu? or What is his name? “It is thanks to the 11 players who played and won this victory for all the country. All the players are Syrian. Some are pro-regime, some are anti-regime, and some are neutral,” the page said.

Abu Bilal, an activist in Homs, Syria’s battered third largest city and home to Abdelbasset Saroot, a crooning national youth team goalkeeper, who has emerged in the last two years as a leader of the local resistance, charged that Syrian forces intensified their shelling of rebel-held parts of the city after the match’s final whistle in Kuwait. “They rained down bombs on Old Homs,” he said.

More fundamentally, any comparison to Iraq’s 2007 victory is forced at best.

A dramatic penalty shoot-out with South Korea secured Iraq a place in the Asian Cup final. Cheering fans in Baghdad paid the price. A suicide bomber and celebratory gunfire killed 50. The team met to discuss quitting. But after watching a news report where a bereaved woman, hysterical after her son’s death, begged them to continue in the memory of her child they only had one choice.

Fate would produce the just result, they predicted, and indeed it did.  In a soccer fairy tale, Iraq emerged against Saudi Arabia the winner of the Asian Cup. To win the game, a Kurdish player passed the ball to a Sunni, who scored the decisive goal. Meanwhile a Shiite goalkeeper held the opposing team scoreless to secure the victory. The teamwork was at the time Iraqis’ only source of hope for a life beyond conflict in a war-ravaged country devoid of good news and inclusive institutions, a mirage of religious and ethnic harmony.

Iraqi national team players truly felt that they were playing for their nation rather than for an autocratic leader who celebrated their achievements for his own political benefit. Despite the sectarian violence Iraqis had put neo-patriachism, the phrase coined by Palestinian-American scholar Hisham Shirabi, behind them.

By contrast, Syrian players fall into two categories: those that have internalized the neo-patriarchic notion of the autocratic leader as a father figure and those that haven’t defected out of fear for the safety of their families even if the war has reduced Syrian soccer to a shadow of itself.

Stadiums in this soccer-crazy country are empty and frequently used as staging posts for pro-Assad forces or detention centers. Largely suspended, the Syrian league has been reduced to four teams, two of which dropped out in the 2010/2011 championship. That pitted Syria’s two historically strongest team Al Jaish (The Army) against its police counterpart, Al Shurta (The Police), who represented the regime’s grip on the sport.

Al Jaish was for the longest time virtually synonymous with the national team. National service was crucial to Al Jaish’s success. The moment a talented young player came of age, the army conscripted him and he played for Al Jaish. By sucking up the league’s talent they won honors and attracted huge crowds for years, while other clubs had to keep a lid on their discontent.

Similarly, the shabiha, the irregular, civilian-clad, armed groups blamed for many of the atrocities believed to have been committed by forces loyal to Mr. Assad also trace their roots to soccer. In an account of the history of the shabiha, whose designation derives from the Arabic word for ghost, Syria expert Joshua Landis’ Syrian Comment blog, traces their origins to members of the Assad family as well as young, desolate Alawites in northern Syria who saw their escape from poverty and humiliation in becoming wealthy and prestigious on the back of smuggling of banned luxury goods from Lebanon and involvement in soccer.

While the term shabiha has come to mean thugs rather than ghosts, the associated verb, shabaha, describes a goalkeeper, a shabih, jumping into the air or going airborne to stop an opponent’s attack, according to Syrian Comment. The shabih jumps and saves whether he was the soccer goalkeeper or the smuggler who enabled his clients to jump in status with the goods he provided.

Fawwaz al-Assad, a cousin of Bashar’s, widely viewed as the original shabih who rose to control the lucrative port of Latakia and its adjacent smuggling route, started as a fervent supporter of the city’s Tishreen soccer team before becoming its president. Syrian Comment recalls Fawwaz driving in “his big Mercedes” a demonstrative loop around the Al-Assad stadium before sitting on a chair in a fenced off area track reserved for players and coaches to watch a match.

“Always Fawwaz would have few words with the referee before the game also. In one very famous incident Fawwaz took his gun out and let out some shots. The game was between Hutteen and Tishreen and a forward scored on an offside goal for Fawwaz’ team Tishreen. The referee in that famous incident changed his mind after the gun shot to claim the goal in favor of Fawwaz’ team. That made Fawwaz happier and he let out more shots. Fawwaz was a real bully and acted like one,” Syrian Comment reported.

Strife in Syria has meanwhile forced some 50 players and coaches into exile.

Lulu Shanku, a former national team player returned to his Swedish premier league team Syrianska disgusted with the corruption in Syrian soccer and the intimidation of players by the Assad regime.  In some ways, he may have jumped from the fire into the frying pan, illustrating the importance Arab autocrats attribute to soccer even when it is played beyond the Middle East and North Africa.

Power within Shanku’s team rests with an Assyrian exile who served on Syrianska’s board and now is its unelected head of security. A mechanic and failed gas station owner who unabashedly defends Mr. Assad, he is believed to have ties to Syrian intelligence and local crime groups.