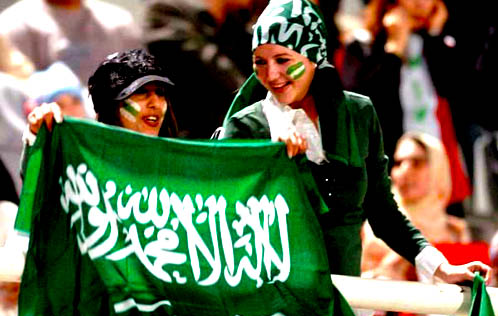 Saudi Arabia is building its first stadium especially designed to allow women who are currently barred from attending soccer matches because of the kingdom’s strict public gender segregation to watch games.

The stadium in the Red Sea port city of Jeddah is scheduled to be completed in 2014 and will have private cabins and balconies to accommodate female spectators, according to Al Sharq, a state-owned newspaper.

“Sources close the stadium said more than 15 percent of the facility will be allocated for families when the facility is fully completed in 2014. Besides families, female journalists and photographers will also be admitted into the stadium and will be allocated exclusive places away from male journalists so they can cover local and international events,” Al Sharq said.

Saudi puritan interpretation of Islam prohibits unrelated men and women from mingling in public. Saudi Arabia refers to public areas for women or families as family areas in which men unaccompanied by a female relative are barred from entry. Similarly, women are denied access to areas where unaccompanied men congregate.

The building of the stadium comes two months after Saudi Arabia in a bid to avoid being barred from the 2012 London Olympics agreed to send a token female equestrian to the tournament to represent a country that effectively discourages women’s sports.

The decision followed a warning last year by Anita DeFrantz, the chair of the International Olympic Committee’s Women and Sports Commission, that Saudi Arabia alongside Qatar and Brunei could be barred if they did not send for the first time at least one female athlete to the London Olympics.

An earlier agreement by Qatar, the only other country whose indigenous population are largely Wahhabis, adherents of the puritan interpretation of Islam predominant in Saudi Arabia, to field a women’s team in London increased the pressure on the kingdom to follow suit.

Saudi Arabia’s most likely female athlete is 18-year old equestrienne Dalma Rushdi Malhas who won a bronze medal in the 2010 Singapore Youth Olympics. At the time, Ms. Malhas was not officially delegated to compete in Singapore on behalf of the kingdom.

Despite official discouragement women have increasingly been pushing the envelope at times with the support of more liberal members of the ruling Al Saud family, The kingdom’s toothless Shura or Advisory Council has issued regulations for women’s sports clubs, but conservative religious forces often have the final say.

Nonetheless the mandate granted to a Spanish consultancy last year to develop the kingdom’s first national sports plan is exclusively for men’s sports.

The pushing of the envelope comes as women are proving to be the most visible in challenging the kingdom’s gender apartheid against the backdrop of simmering discontent. Manal al-Sharif was detained in May for nine days after she videotaped herself flouting the rules by getting behind a steering wheel and driving. She was released only after signing a statement promising a that she would stop agitating for women’s rights.

Discrepancy about women’s sports is reinforced by the fact that physical education classes are banned in state-run Saudi girl’s schools  Women’s games and marathons are often cancelled when more conservative members of the clergy gets wind of them.

The issue of women’s sport has at time sparked sharp debate with clerics condemning it as corrupting and satanic and charging that it spreads decadence. Clerics warned that running and jumping can damage a woman’s hymen and ruin her chances of getting married. In defiance, women have quietly been establishing soccer and other sports teams using extensions of hospitals and health clubs as their base.

For his part, Saudi King Abdullah has made moves to enhance women’s rights. Last September, women were granted the right to vote, stand for election in local elections and join the advisory Shura council.