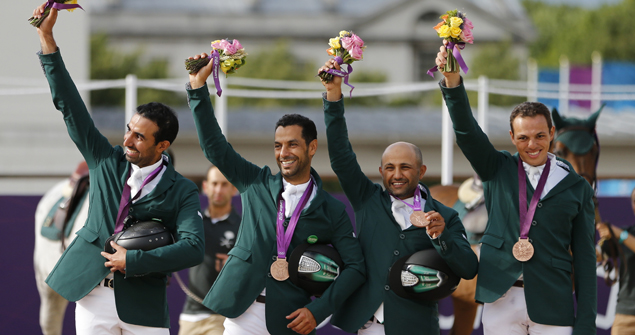 Congratulations to the Saudi Equestrian team for winning a bronze medal at the London Olympics.

In one of the most nail-biting finals in many years, the team show jumping finals yesterday at the 2012 Olympics saw a jump-off for gold and silver medals and unexpectedly — at least for the vast majority of the spectators — the Saudi national team taking a well-deserved bronze.

The Saudi team topped the standings after the first day of Olympic equestrian team show jumping at London’s Greenwich Park in a tightly contested competition of 15 teams. After dropping the weakest score from their total on Sunday’s first round, which the competition rules allow, the Saudi team carried only one fault into yesterday’s final jump-off.

The grandson of King Abdullah, Prince Abdullah bin Miteb, jumped a clear round placing Saudi Arabia into the lead for the last round of the team show jumping final.

Prince Abdullah is the second royal Olympian to have made an appearance in the Greenwich Park arena. Zara Phillips, granddaughter of Queen Elizabeth and daughter of Princess Anne, was part of the British team that won silver in eventing. Prince Abdullah, interviewed at the end of the first round as to the team’s chances said, “Any medals would be a blessing. This is the first time we have been to the Olympic finals as a team. The Custodian of the Two Holy Mosques has been phoning us every day to follow our results.”
…

And from Saudi Gazette: