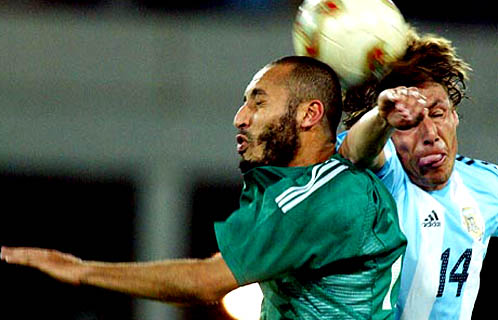 It is hard to fathom that Colonel Moammar Qaddafi’s third son, Al Saadi Al Qaddafi, would truly be any more conciliatory to NATO-backed Libyan rebels who have effectively replaced his father as the country’s rulers, than his older, fire-breathing brother Saif al-Islam, who has vowed to fight to the bitter end.

If Saadi, a man whose brutality as head of the Libyan soccer association as well as a military commander is vividly remembered by many Libyans, surrenders to the rebels, he would be handing them on a silver platter an important psychological and symbolic victory. He would also be fuelling suggestions that there is less cohesion among Mr. Qaddafi’s family and closest associates than Mr. Qaddafi and Said have sought to project. Saadi has said that he wants to avoid further bloodshed that seems likely in the coming days.

For his part, Saif has warned that some 20,000 Qaddafi loyalists will resist a rebel attack on the former Libyan leader’s hometown of Sirte. The rebels have given the defenders of the city an ultimatum until Saturday to lay down their arms or face the consequences.

At face value, Saadi and Saif’s different positions appear to be at best a surprising reversal of roles with Saadi, described in a leaked 2009 US diplomatic cable as “notoriously ill-behaved” with a history of violence playing peacekeeper while Saif, long seen as reforming, pro-Western face of the Qaddafi regime positioning himself as a warmonger.

While there is no way of knowing to what degree the varying positions of the two brothers reflect differences within Mr. Qaddafi’s inner circle, it is not inconceivable that they are two sides of the same coin. The Qaddafis throughout the six-month crisis have simultaneously said that they are willing to negotiate a solution while at the same time denouncing their opponents as rats whom they would fight to the bitter end. Saadi’s notion of a power-sharing arrangement has long been rejected by the rebels who say they will settle for nothing less than the Qaddafi’s complete removal from power.

Saadi, beyond guarantees for his safety by the rebels, can expect little mercy or compassion from the rebels. The man who now says that he would not use arms against fellow Muslims had no compunction about attacking his opponents who employed soccer to denounce his father’s regime and sentencing them to death.

A pile of rubble in the eastern Libyan city of Benghazi testifies to the length Saadi was willing to go to abuse the beautiful game as a crutch for the regime. The rubble is what is left of the headquarters of the Al-Ahly Benghazi soccer club.

It tells a story that is extraordinary even by the standards of the bending of the beautiful game to their will by autocratic leaders in the Middle East and North Africa. The story of Al Ahly’s battle with the Qaddafis also goes a long way to explain why Benghazi emerged as the capital of the revolt.

What makes Al-Ahly’s story different from the battle on soccer pitches between autocrats and militant fans elsewhere in the Middle East and North Africa was Saadi’s desperate ambition to be recognized as a top soccer player and the brutality with which he responded to expressions of dissent. To fulfill his ambition, he bought and managed Tripoli’s main soccer club, which like its Benghazi namesake is also called Al Ahly. He also captained and played on its team.

The rubble is what is left of Saadi’s effort to bury Benghazi’s historic club lock, stock and barrel. The club’s red and white colors were banned for several years from public display.

It was a heavy price to pay for challenging the regime in a country in which sports broadcasters were forbidden to identify players by name to ensure that they did not become more popular or have greater media exposure than Saadi himself.

The story of Al Ahly stands out as a perverted twist of the abuse of soccer by other Middle Eastern leaders like Iranian President Mahmud Ahmadinejad and ousted Egyptian President Hosni Mubarak who publicly identified with their national soccer teams in a bid to boost their lingering popularity.

In a country in which the mosque and the soccer pitch were the only release valves for pent-up anger and frustration prior to revolt against the Qaddafis, Saadi’s association with Al Ahly meant that the prestige of the regime was on the line whenever the team played.
As a result, soccer was as much a political match as it was a competition in which politics rather than performance often dictated the outcome.

Saadi showed his real face when little more than a decade ago, Al Ahly Benghazi fans had enough of his subversion of the game. They booed him and his team during a national cup final in front of visiting African dignitaries and taunted him by dressing up a donkey in the colors of Al Ahly Tripoli.

“I will destroy your club! I will turn it into an owl’s nest!” Khalifa Binsraiti, Al Ahly Benghazi’s then chairman, who was imprisoned in the subsequent crackdown, quotes an irate Saadi as telling him immediately after the match in an interview with The Los Angeles Times.

A penalty in another Al Ahli Benghazi match against a team from Al-Baydah, the home town of Saadi’s mother and the place where this year’s first anti-government demonstrations against corruption in public housing were staged, again so outraged Benghazi fans that they invaded the pitch, forcing the game to be abandoned.

Things came to a head when Saadi engineered Al Ahly Benghazi’s relegation to the second division by having a referee in a match against Libyan premier league team Al Akhdar ensure the team’s humiliation by calling a questionable penalty.

Al Ahly’s coach confronted the referee and militant fans stormed the pitch. The game was suspended and Al Ahly’s fate was sealed.

But Al Ahly fans didn’t leave it at that. They headed to downtown Benghazi shouting slogans against Saadi. They burnt a likeness of his father and set fire to the local branch of his national soccer association.

In response, Saadi had Al Ahly’s 37-hectare clubhouse and facilities raised to the ground while plainclothesmen arrested 80 soccer fans of whom 30 were charged with vandalism, destruction of public property and having contacts with Libyan dissidents abroad, a capital offense in Mr. Qaddafi’s Libya. Three were sentenced to death, but their penalties were later converted to life in prison by the Libyan ruler. They were released after serving five years in prison.

Public outrage over the retaliation against Benghazi forced Saadi to resign as head of the national soccer federation, only to be reinstated by his father in response to the federation’s alleged claim that it needed Mr. Qaddafi’s son as its leader.

The rebels, many of them soccer fans from Benghazi, will not have forgotten their humiliation at the hands of Saadi whose campaign against Al Ahly Benghazi is a study in the use of soccer by authoritarian Arab regimes to distract attention from economic and political problems and of Arab autocrats’ divide and rule approach to governance.

Nonetheless, how the rebels treat Saadi should he indeed surrender himself will serve as a litmus test of whether the rebels as Libya’s new authority can ensure that their hard fought struggle to rid the country of the yoke of dictatorship can ensure that it does not descend into a violent and vicious spiral of revenge and retribution.

James M. Dorsey is a senior fellow at Nanyang Technological University’s S. Rajaratnam School of International Studies in Singapore and the author of the blog, The Turbulent World of Middle East Soccer.